Caption:
Alexander D’Hooghe, and associate professor of architecture and director of the Center for Advanced Urbanism at MIT.
Credits:
Photo: M. Scott Brauer
For many people, suburbs have a bad reputation: too bland, too boring. Alexander D’Hooghe would like to change that perception.

D’Hooghe, a Belgian-born architect and director of the Center for Advanced Urbanism at MIT, cares deeply about urban form and the large-scale issues cities face in achieving more efficient energy use, better transportation and less congestion. One of his main concerns is better integrating suburbs with the larger metropolitan areas in which they exist. 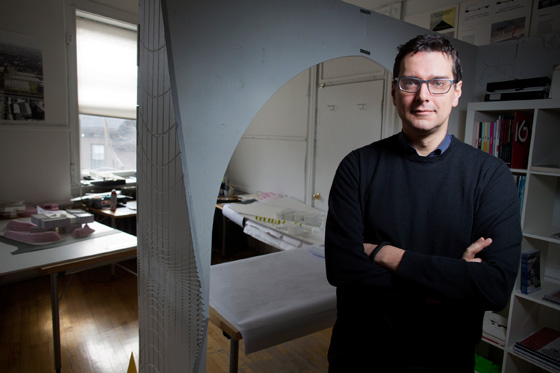 Alexander D’Hooghe, and associate professor of architecture and director of the Center for Advanced Urbanism at MIT. Photo: M. Scott Brauer

“The future of our cities is in the gradual densification of our suburbs,” D’Hooghe says. After all, he thinks, not all suburbs have to take the form of sprawling tracts: “We need to do some myth-busting about that.” Instead, D’Hooghe believes, suburban areas can have better-designed public and commercial spaces, and better transit hubs, if we’re willing to make a few changes to them.

For instance, take the big box, that often-loathed architectural form housing large stores. That is precisely the kind of form that D’Hooghe would like to reinvent, to take advantage of its low-cost elements while providing new aesthetics and better functionality for people.

“The big box is ugly,” D’Hooghe says. “But it’s also inexpensive, generous and flexible.” That’s why, he adds, “If we can make the big box more intelligent, it may be the future of the suburbs.”

To see what D’Hooghe has in mind, consider one of his designs, in the town of Asse, Belgium, where construction started last fall on one of his variations on the big box. In this case, it is a modernist structure with a wing that incorporates a police station, fire station and youth center. By linking those facilities in one building, D’Hooghe saved room for a large community park next to the building.

Meanwhile, in the Anderlecht district of Brussels, another D’Hooghe project will soon start construction. A public plaza surrounded by urban versions of big boxes is under development, replacing a slaughterhouse; D’Hooghe’s design studio developed a mixed-use commercial structure, now being built, with flexible spaces that can be adapted to multiple types of use over time.

“It should serve many audiences,” D’Hooghe says of the structure, noting that flexibly designed buildings can save large chunks of energy over time, compared to replacing older buildings more often.

D’Hooghe grew up in Brussels as part of a well-known musical family; his father was a professional classical musician. He considered making music his own career, but decided to strike off on his own and take up architecture instead. D’Hooghe graduated as a civil engineer and architect from the University of Leuven, in Belgium, then received a master’s degree in urban design at Harvard University’s Graduate School of Design in 2001. D’Hooghe received his PhD in architecture from the Berlage Institute in Rotterdam, Netherlands, in 2007.

Among the designers D’Hooghe studied with and praises are Rem Koolhaas, the prominent Dutch architect who teaches at Harvard; Wiel Arets, the new dean of architecture at the Illinois Institute of Technology; and Marcel Smets, an urbanist in Belgium. And while many of his intellectual concerns now revolve around planning issues, he still regards himself as a design-oriented architect.

“One of the biggest things I care about is making drawings,” he says.

He set up his own practice, the Organization for Permanent Modernity, which has offices in Boston and Brussels, in 2003, and joined MIT in 2005. Last year, D’Hooghe was granted tenure at MIT, and became the founding director of MIT’s Center for Advanced Urbanism (CAU), which has an ambitious agenda meant to establish links between architects and planners, while applying systems thinking to cities.

Indeed, CAU, which has more than 20 affiliated MIT faculty, is holding a large conference on cities, “Infrastructural Monument,” on April 8 and 9 at MIT’s Media Lab.

D’Hooghe describes transit infrastructure as another significant priority, in addition to — and related to — his interest in suburban design. For instance, he suggests, suburbs could make better use of intermodal transit hubs — linking road, bus, rail or bicycle — in building smart links within metropolitan areas, and could place more business activity at such hubs, reducing commutes and travel while helping suburban areas revolve around such nodes.

“Infrastructure is not really about infrastructure, it’s about how we live,” D’Hooghe says. At the moment, he says, in the United States, “we’re living on the worn-out threads of an Eisenhowerian regime,” referring to the interstate highways built since the 1950s. “Our existing infrastructure is at the end of its lifetime.”

The nature of such work is interdisciplinary, D’Hooghe recognizes, and means linking design with an urban-planning framework. That approach will also be necessary to help cities ward off the effects of natural disasters, adds D’Hooghe, who has produced designs for artificial islands along the Belgian coastline as a barrier against storms.

“If we can build large-scale design as a field, then I will be happy,” D’Hooghe says.

Still, he acknowledges that his aims will not be easy to achieve. Transforming suburbs, he notes, “requires a will for density” that not everyone has, even if it makes environmental sense. Still, he hopes that his own designs can make an impact on people’s views, including his own rethinking of the big box.

“A building like that can be proud,” D’Hooghe says. “It doesn’t have to be ashamed of itself.”