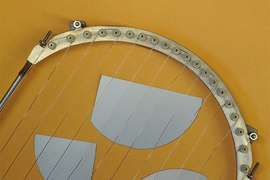 ↓ Download Image
Caption: Pieces of a silicon wafer (in gray), used for solar cells or computer chips, can be coated or "passivated" using a vapor deposition process, in which the wires shown here are heated to vaporize polymer materials which then are deposited to coat the surface.
Credits: Photo: Felice Frankel

Caption:
Pieces of a silicon wafer (in gray), used for solar cells or computer chips, can be coated or "passivated" using a vapor deposition process, in which the wires shown here are heated to vaporize polymer materials which then are deposited to coat the surface.
Credits:
Photo: Felice Frankel
Silicon, the material of high-tech devices from computer chips to solar cells, requires a surface coating before use in these applications. The coating “passivates” the material, tying up loose atomic bonds to prevent oxidation that would ruin its electrical properties. But this passivation process consumes a lot of heat and energy, making it costly and limiting the kinds of materials that can be added to the devices.

Now a team of MIT researchers has found a way to passivate silicon at room temperature, which could be a significant boon to solar-cell production and other silicon-based technologies.

Typically, silicon surfaces are passivated with a coating of silicon nitride, which requires heating a device to 400 degrees Celsius, explains Gleason, the Alexander and I. Michael Kasser Professor of Chemical Engineering. By contrast, the process Gleason’s team uses decomposes organic vapors over wires heated to 300 C, but the silicon itself never goes above 20 C — room temperature. Heating those wires requires much less power than illuminating an ordinary light bulb, so the energy costs of the process are quite low.

Conventional silicon-nitride passivation “is one of the more expensive parts, and one of the more finicky parts, in the processing” of silicon for solar cells and other uses, says Buonassisi, an associate professor of mechanical engineering, “so replacing part of silicon nitride’s functionality with a simplified, robust organic layer has the potential to be a big win.”

Passivation is essential: Without it, silicon’s surface is oxidized as soon as it’s exposed to air, impeding its performance as a solar cell. “It would oxidize within minutes,” Yang says. By contrast, the MIT team has tested silicon chips with the new polymer coating in place for more than 200 hours, observing no degradation at all in performance. “The electrical properties did not change,” she says.

The low temperature of the silicon chip in this process means that it could be combined with other materials, such as organic compounds or polymers, that would be destroyed by the higher temperature of the conventional coating process. This could enable new applications of silicon chips — for example, as biosensors following bonding with compounds that react with specific biological molecules. “People have grafted DNA and protein antibodies to silicon,” Yang notes.

The energy used in manufacturing silicon solar cells is a critical concern because every bit of cost savings helps to make them more competitive with other sources of electricity. The lower temperatures could significantly reduce manufacturing costs, the MIT researchers say.

The new process also has an added benefit, providing an anti-reflective coating that improves a solar cell’s overall efficiency, the team says.

Both the conventional process and the new process take place in a vacuum chamber. Liquid reactants evaporate, then adsorb and react on the surface. The adsorption step is much the same as mist forming on a cold bathroom window after you take a shower.

The process can easily be scaled to the size of conventional solar cells, Gleason says. Additionally, the materials involved are all commercially available, so implementing the new method for commercial production could be a relatively quick process.

Buonassisi describes lowering the cost of manufacturing equipment, including that used to apply the passivating and antireflection coating, as “one of the three steps that’s needed to drive down the price of solar modules to widespread grid competitiveness.” (The other two are improvements in efficiency and reducing the amount of materials used.) The next step for his team is to scale up the process from laboratory-scale to production levels that could lead to commercialization, he says.

The challenge in making this advance, he explains, was found at the atomic level — specifically, at the interface between the organic coating material and the silicon, to ensure that the two bonded solidly. Tests have shown that the process this team developed has solved that challenge, Buonassisi says. While the team used one specific polymer for the coating, the process could be replicated using other organic materials.

Hideki Matsumara, a professor of materials science at the Japan Advanced Institute of Science and Technology, says he is “very positive” about the results of this research. He says finding a low-temperature process that works for passivation “is useful, since the quality of silicon wafers is degraded by annealing” in conventional high-temperature processes. In addition, he says, “if it is room-temperature, we can extend the application to other areas such as organic solar cells.” Overall, he says, this work represents “significant progress in our knowledge, that even organic films can be used as a high-quality passivation layer.”

The research was supported by the Italian energy company Eni S.p.A., under the Eni-MIT Alliance Solar Frontiers Program.