Wrinkled surfaces could have widespread applications 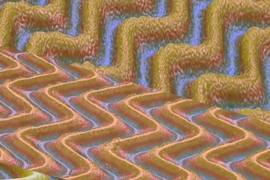 ↓ Download Image
Caption: Images taken with a 3-D microscope show wrinkled surfaces produced using a method developed by the MIT team. The size, spacing and angles of the wrinkles vary depending on how much the original underlying surface was stretched, and how the stretching was released.
Credits: Images by Jorge Luis Yague and Felice Frankel

Caption:
Images taken with a 3-D microscope show wrinkled surfaces produced using a method developed by the MIT team. The size, spacing and angles of the wrinkles vary depending on how much the original underlying surface was stretched, and how the stretching was released.
Credits:
Images by Jose Luis Yague and Felice Frankel

Caption:
Images taken with a 3-D microscope show wrinkled surfaces produced using a method developed by the MIT team. The size, spacing and angles of the wrinkles vary depending on how much the original underlying surface was stretched, and how the stretching was released.
Credits:
Images by Jose Luis Yague and Felice Frankel
The wrinkles on a raisin result from a simple effect: As the pulp inside dries, the skin grows stiff and buckles to accommodate its shrinking size. Now, a team of researchers at MIT has discovered a way to harness that same principle in a controlled and orderly way, creating wrinkled surfaces with precise sizes and patterns.

This basic method, they say, could be harnessed for a wide variety of useful structures: microfluidic systems for biological research, sensing and diagnostics; new photonic devices that can control light waves; controllable adhesive surfaces; antireflective coatings; and antifouling surfaces that prevent microbial buildup.

The process uses two layers of material. The bottom layer, or substrate, is a silicon-based polymer that can be stretched, like canvas mounted on a stretcher frame. Then, a second layer of polymeric material is deposited through an initiated chemical vapor deposition (iCVD) process in which the material is heated in a vacuum so that it vaporizes, and then lands on the stretched surface and bonds tightly to it. Then — and this is the key to the new process — the stretching is released first in one direction, and then in the other, rather than all at once.

When the tension is released all at once, the result is a jumbled, chaotic pattern of wrinkles, like the surface of a raisin. But the controlled, stepwise release system developed by the MIT team creates a perfectly orderly herringbone pattern.

The size and spacing of the herringbone ribs, it turns out, is determined by exactly how much the underlying material was originally stretched in each direction, the coating’s thickness, and in which order the two directions are released. The MIT team has shown the ability to control the exact size, periodic spacing and angles in both directions for the first time.

The system is unusual in its ability to produce precisely controlled patterns without the need for masks or complex printing, molding or scanning processes, Gleason says.

Fundamentally, “it’s the same process that gives you your fingerprints,” says Gleason, the Alexander and I. Michael Kasser Professor of Chemical Engineering. But in this case, precise control over the resulting patterns requires the iCVD process, which Gleason and her colleagues have been developing for years. This gives a high degree of control over the thickness of layers deposited, and also enables control of the surface chemistry of the coatings.

Additionally, the iCVD method provides the high degree of adhesion that is needed to form buckled patterns. Without sufficient adhesion, the surface layer would simply separate from the substrate.

“One distinguishing feature of what we’re showing is the ability to create deterministic two-dimensional patterns of wrinkles,” such as a zigzag herringbone pattern, says Boyce, the Ford Professor of Engineering and head of MIT’s Department of Mechanical Engineering. “The deterministic nature of these patterns is very powerful and yields principles for designing desired surface topologies.”

“One important application is the measurement of ultra-thin-film material properties without knowing the thin-film thickness,” Yagüe says. The film’s material stiffness and thickness could be measured by analyzing the pattern, he says.

Another possible application, the researchers say, is microfluidic devices such as those used to test for molecules in a biological sample, where tiny channels of precise dimensions need to be produced on a surface. These could potentially be used as sensors for contaminants, or as medical diagnostic devices. Another possible use is in the control of reflections or the wettability of a surface — making it attract or repel water, properties that depend both on the surface shape and the chemical composition of the material.

Such patterns can also be used to make surfaces adhere to each other — and in this case, the degree of adhesion can also be controlled. “You can dynamically tune the patterning — direct stretching or other actuation can be used to tune the pattern and corresponding properties actively during use,” Boyce says, even letting surfaces return to perfectly flat. This could, for example, be used to provide secure bonding with quick-release capability or to actively alter reflectivity or wettability.

Many techniques have been used to create surfaces with such tiny patterns, whose dimensions can range from nanometers (billionths of a meter) to tens of micrometers (millionths of a meter). But most such methods require complex fabrication processes, or can only be used for very tiny areas.

The new method is both very simple (consisting of just two or three steps) and can be used to make patterned surfaces of larger sizes, the team says. “You don’t need an external template” to create the pattern, says Yin, the paper’s lead author.

The predictability of the resulting patterns was a big surprise, members of the team say. “One of the amazing things is to note how beautifully the experiments and the simulation match,” Gleason says.

John Hutchinson, a professor of engineering and of applied mechanics at Harvard University who was not involved in this research, says, “Wrinkling phenomena are highly nonlinear and answers to questions concerning pattern formation have been slow to emerge.” He says the MIT team’s work “is an important step forward in this active area of research that bridges the chemical and mechanical engineering communities. The advance rests on theoretical insights combined with experimental demonstration and numerical simulation — it covers all the bases.”

The work was funded by the King Fahd University of Petroleum and Minerals in Saudi Arabia.