A climate window in the Southern Ocean

Caption:
The Southern Ocean, the vast belt of water circling Antarctica, is a turbulent part of the ocean conveyor, where vast reservoirs of heat and carbon may rise to the surface, interacting with the atmosphere. The region, researchers say, plays a critical role in climate change.
Credits:
Image: Google Earth
The world’s oceans act as a massive conveyor, circulating heat, water and carbon around the planet. This global system plays a key role in climate change, storing and releasing heat throughout the world. To study how this system affects climate, scientists have largely focused on the North Atlantic, a major basin where water sinks, burying carbon and heat deep in the ocean’s interior.

But what goes down must come back up, and it’s been a mystery where, and how, deep waters circulate back to the surface. Filling in this missing piece of the circulation, and developing theories and models that capture it, may help researchers understand and predict the ocean’s role in climate and climate change.

Recently, scientists have found evidence that the missing piece may lie in the Southern Ocean — the vast ribbon of water encircling Antarctica. The Southern Ocean, according to observations and models, is a site where strong winds blowing along the Antarctic Circumpolar Current dredge waters up from the depths.

“There’s a lot of carbon and heat in the interior ocean,” says John Marshall, the Cecil and Ida Green Professor of Oceanography at MIT. “The Southern Ocean is the window by which the interior of the ocean connects to the atmosphere above.”

Marshall and Kevin Speer, a professor of physical oceanography at Florida State University, have published a paper in Nature Geoscience in which they review past work, examine the Southern Ocean’s influence on climate and draw up a new schematic for ocean circulation.

For decades, a “conveyor belt” model, developed by paleoclimatologist Wallace Broecker, has served as a simple cartoon of ocean circulation. The diagram depicts warm water moving northward, plunging deep into the North Atlantic; then coursing south as cold water toward Antarctica; then back north again, where waters rise and warm in the North Pacific.

However, evidence has shown that waters rise to the surface not so much in the North Pacific, but in the Southern Ocean — a distinction that Marshall and Speer illustrate in their updated diagram. 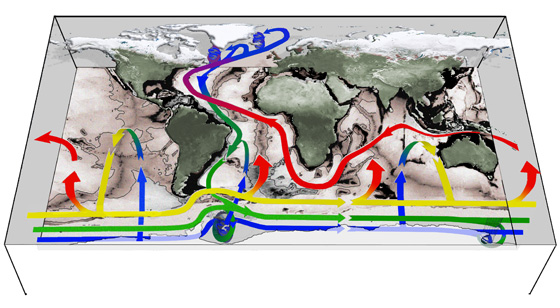 A new schematic emphasizes the role of the Southern Ocean in the world’s ocean circulation. The upper regions of ocean circulation are fed predominantly by broad upwelling across surfaces at mid-depth over the main ocean basins (rising blue-green-yellow arrows). Upwelling to the ocean surface occurs mainly around Antarctica in the Southern Ocean (rising yellow-red arrows) with wind and eddies playing a central role.
Image: John Marshall and Kevin Speer

Marshall says winds and eddies along the Southern Ocean drag deep waters — and any buried carbon — to the surface around Antarctica. He and Speer write that the updated diagram “brings the Southern Ocean to the forefront” of the global circulation system, highlighting its role as a powerful climate mediator.

Indeed, Marshall and Speer review evidence that the Southern Ocean may have had a part in thawing the planet out of the last Ice Age. While it’s unclear what caused Earth to warm initially, this warming may have driven surface wind patterns poleward, pulling up deep water and carbon — which would have been released into the atmosphere, further warming the climate.

In a cooling world, it appears that winds shift slightly closer to the Equator, and are buffeted by the continents. In a warming world, winds shift toward the poles; in the Southern Ocean, unimpeded winds whip up deep waters. The researchers note that two manmade atmospheric trends — ozone depletion and greenhouse gas emissions from fossil fuels — have a large effect on winds over the Southern Ocean: As the ozone hole recovers, greenhouse gases rise and the planet warms, winds over the Southern Ocean are likely to shift, affecting the delicate balance at play. In the future, if the Southern Ocean experiences stronger winds displaced slightly south of their current position, Antarctica’s ice shelves may be more vulnerable to melting — a phenomenon that may also have contributed to the end of the Ice Age.

“There are huge reservoirs of carbon in the interior of the ocean,” Marshall says. “If the climate changes and makes it easier for that carbon to get into the atmosphere, then there will be an additional warming effect.”

Jorge Sarmiento, a professor of atmospheric and oceanic sciences at Princeton University, says the Southern Ocean has been a difficult area to study. To fully understand the Southern Ocean’s dynamics requires models with high resolution — a significant challenge, given the ocean’s size.

“Because it’s so hard to observe the Southern Ocean, we’re still in the process of learning things,” says Sarmiento, who was not involved with this research. “So I think this is a very nice snapshot of our current understanding, based on models and observations, and it will sort of be a touchstone for future developments in the field.”

Marshall and Speer are now working with a multi-institution team led by MIT’s collaborator, the Woods Hole Oceanographic Institution, to measure how waters upwell in the Southern Ocean. The researchers are studying the flow driven by eddies in the Antarctic Circumpolar Current, and have deployed tracers and deep drifters to measure its effects; temperature, salinity and oxygen content in the water also help tell them how eddies behave, and how quickly or slowly warm water rises to the surface.

“Any perturbation that is made to the atmosphere, whether it’s due to glacial cycles or ozone or greenhouse forcing, can change the balance over the Southern Ocean,” Marshall says. “We have to understand how the Southern Ocean works in the climate system and take that into account.”