Caption:
Juan Esteban Montero will write a thesis on the mining industry as part of the requirements in the System Design and Management program.
Credits:
Photo: Kathy Tarantola Photography
Shortly after Juan Esteban Montero began MIT’s System Design and Management program (SDM) last January, he looked for students who shared his passion for the natural resources industry. He was able to find only a few students at MIT Sloan with this interest. But seeking out ways to meet other MIT students interested in mining led Montero to create MIT’s Mining, Oil, and Gas Club (MOG).

“The club is doing very well thanks to a great group of leaders. We started with just five students from MIT Sloan and mechanical engineering and now have 120 members from all five schools at MIT,” Montero says. “We started with small events and then created a lecture series to bring experts to campus. Many MIT students are now learning about the challenges of the natural resources industries and at the same time, these industries are interested in the projects and research MIT students are working on.”

Montero notes that the club has also sparked interest outside of MIT. “The Chilean government has expressed an interest in working with MOG. Universities in Canada and Japan are also interested in the club’s research, and people from everywhere are getting in touch with us. Today, we received an email from the Yazd University of Iran expressing interest in our club.”

Montero believes MOG will continue to grow and has a lot of potential for its members. “Two companies have asked if they can come to campus to recruit MIT students. We haven’t even reached out to recruiters yet, so this is a great opportunity for our members,” he says. “We’re creating a career director position within the club to represent it in a more formal way. We also plan to connect with MIT’s career fair to make sure mining companies are represented in the future.” 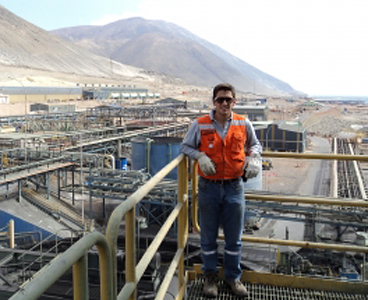 Growing up in Santiago, Chile — where mining is a major component of the national economy — Montero wanted to be an engineer as a child. He also wanted his career to have an impact on society, and he knew that mining was the way to achieve this.

“I really enjoyed working in the mining industry because it is the main industry of the Chilean economy and my work had an impact on the country. I was lucky to work for the most important mining company in the world, BHP Billiton, and see the impact of my work in different aspects — such as creating jobs. As my responsibilities grew, I knew I wanted to expand my managerial and engineering skills,” Montero says. “I conducted research online to find a master’s degree program that would combine my interests and that’s when I found SDM. Coming to MIT is the best decision I’ve ever made. The community here is inspiring and I’m really enjoying SDM and MIT.”

As part of his SDM degree requirements, Montero will write a thesis on the mining industry. (SDM is jointly offered by MIT Sloan and the MIT Engineering Systems Division). His research will include the application of flexibility in the engineering design of major mining projects. He is working with Professor Richard de Neufville on the project.

“It takes months, millions of dollars, and a lot of disciplines to design mines. I want to look into different alternatives in a way that is less expensive and easier to compute. I want to find ways for mining companies to explore opportunities that are not visible with current methodology,” Montero says. “Every class I have taken at MIT has been amazing from the managerial and the technical side — and all of them will be helpful as I work on my thesis.”

Montero’s interest in mining and energy doesn’t end with the club or his thesis — he is also a business development researcher for BroadRock Renewables, a clean technology company based in New York.

“I’m working on a market research project for BroadRock. I got this opportunity through SDM and I’m learning a lot from it,” Montero says. “MIT is also giving me the opportunity to visit with Keio University’s SDM Department in Tokyo this January. I’ll work with them on a systems thinking approach for the mining industries in South America and Japan to collaborate. Japan is a very important stakeholder of the natural resources industry and shares significant commonalities with Chile as a major seismic country.”

Students who are interested in joining the Mining, Oil and Gas Club should visit the website or send an email to the club officers.