On the hunt for mathematical beauty

Caption:
Alexei Borodin
Credits:
Photo: M. Scott Brauer
For anyone who has ever taken a commercial flight, it’s an all-too-familiar scene: Hundreds of passengers sit around waiting for boarding to begin, then rush to be at the front of the line as soon as it does.

Boarding an aircraft can be a frustrating experience, with passengers often wondering if they will ever make it to their seats. But Alexei Borodin, a professor of mathematics at MIT, can predict how long it will take for you to board an airplane, no matter how long the line. That’s because Borodin studies difficult probability problems, using sophisticated mathematical tools to extract precise information from seemingly random groups. 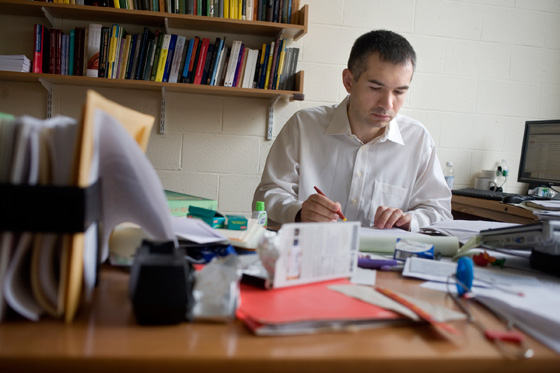 “Imagine an airplane in which each row has one seat, and there are 100 seats,” Borodin says. “People line up in random order to fill the plane, and each person has a carry-on suitcase in their hand, which it takes them one minute to put into the overhead compartment.”

If the passengers all board the plane in an orderly fashion, starting from the rear seats and working their way forwards, it would be a very quick process, Borodin says. But in reality, people queue up in a random order, significantly slowing things down.

So how long would it take to board the aircraft? “It’s not an easy problem to solve, but it is possible,” Borodin says. “It turns out that it is approximately equal to twice the square root of the number of people in the queue.” So with a 100-seat airplane, boarding would take 20 minutes, he says.

Borodin says he has enjoyed solving these kinds of tricky problems since he was a child growing up in the former Soviet Union. Born in the industrial city of Donetsk in eastern Ukraine, Borodin regularly took part in mathematical Olympiads in his home state. Held all over the world, these Olympiads set unusual problems for children to solve, requiring them to come up with imaginative solutions while working against the clock.

It is perhaps no surprise that Borodin had an interest in math from an early age: His father, Mikhail Borodin, is a professor of mathematics at Donetsk State University. “He was heavily involved in research while I was growing up,” Borodin says. “I guess children always look up to their parents, and it gave me an understanding that mathematics could be an occupation.”

In 1992, Borodin moved to Russia to study at Moscow State University. The dissolution of the USSR meant that, arriving in Moscow, Borodin found himself faced with a choice of whether to take Ukrainian citizenship, like his parents back in Donetsk, or Russian. It was a difficult decision, but for practical reasons Borodin opted for Russian citizenship.

Times were tough while Borodin was studying in Moscow. Politically there was a great deal of unrest in the city, including a coup attempt in 1993. Many scientists began leaving Russia, in search of a more stable life elsewhere.

Financially things were not easy for Borodin either, as he had just $15 each month to spend on food and accommodation. “But I still remember the times fondly,” he says. “I didn’t pay much attention to politics at the time, I was working too hard. And I had my friends, and my $15 per month to live on.”

After Borodin graduated from Moscow State University in 1997, a former adviser who had moved to the United States invited Borodin over to join him. So he began splitting his time between Moscow and Philadelphia, where he studied for his PhD at the University of Pennsylvania.

He then spent seven years at the California Institute of Technology before moving to MIT in 2010, where he has continued his research into probabilities in large random objects.

Borodin says there are no big mathematical problems he is desperate to solve. Instead, his greatest motivation is the pursuit of what he calls the beauty of the subject. While it may seem strange to talk about finding beauty in abstract mathematical constructions, many mathematicians view their work as an artistic endeavor.

“If one asks 100 mathematicians to describe this beauty, one is likely to get 100 different answers,” he says.

And yet all mathematicians tend to agree that something is beautiful when they see it, he adds, saying, “It is this search for new instances of mathematical beauty that largely drives my research.”