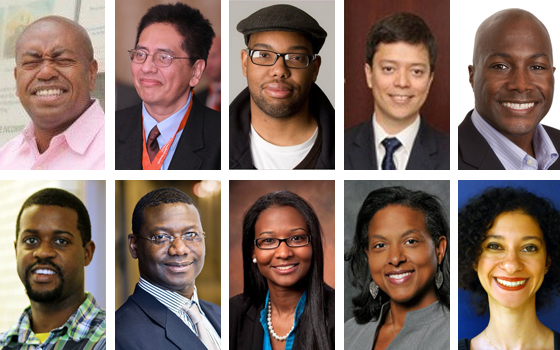 An urban transportation expert, a member of the President’s Committee on the National Medal of Science, and a senior editor at The Atlantic are three of the six new Martin Luther King Jr. visiting professors and scholars on campus this academic year.

Since its creation in 1991, MIT’s MLK Jr. Visiting Professors and Scholars Program has honored the late civil rights leader’s legacy by inviting scholars of diverse backgrounds to campus. While here, MLK visiting professors and scholars are deeply engaged in the life of the Institute through teaching and research; they enrich the Institute’s intellectual life and community while enhancing their own scholarship. To date, 68 visiting professors and 24 visiting scholars have come to MIT through the program.

Robert Hampshire is an assistant professor at the John H. Heinz III School of Public Policy and Management at Carnegie Mellon University. His research focus is urban transportation systems, and he is interested in innovative ways to reduce urban congestion and reduce air pollution. As an MLK Visiting Assistant Professor, he will work closely with Professor Richard C. Larson in the Engineering Systems Division as a lecturer and collaborator on research papers.

Terrence Blackman is an instructor in the mathematics department at Medgar Evers College of the City University of New York. His research focuses on the Jacquet-Langlands correspondence. As an MLK Visiting Assistant Professor, he will work closely with Professor David Vogan and participate in study of Lie groups and in the Department of Mathematics’ number theory seminars. He will also teach undergraduate courses, including a mix of recitations in the department’s core courses.

Carlos Castillo-Chavez is a Regents Professor and the Joaquin Bustoz Jr. Professor of Mathematical Biology at Arizona State University (ASU). He is also a Distinguished Sustainability Scientist and executive director of ASU’s Mathematical and Theoretical Biology Institute and Institute for Strengthening the Understanding of Mathematics and Science. He is a member of the President’s Committee on the National Medal of Science. As an MLK Visiting Professor, he will work closely with Professor Moe Win in the Department of Aeronautics and Astronautics.

Ta-Nehisi Coates is currently a senior editor at The Atlantic. He is a leading journalist and public intellectual whose work centers on politics, culture and society from a point of view that recognizes that the United States is not yet a race-blind society. As an MLK Visiting Scholar, Coates will teach one course per semester and give a public lecture at the Program in Writing and Humanistic Studies on his work in progress.

Thomas Epps III ’98, SM ‘99 is currently an associate professor and the Thomas and Kipp Gutshall Chair of Chemical and Biomolecular Engineering at the University of Delaware, with a joint appointment in materials science and engineering. His research group focuses on the design, synthesis and characterization of polymeric materials that exhibit nanoscale self-assembly for applications including conducting membranes, nanoscale templates, coatings and drug-delivery materials. As an MLK Visiting Associate Professor, he will work closely with Professor Tim Swager in the Department of Chemistry on novel materials that undergo controlled assembly processes.

Julio D’Arcy received his PhD in chemistry at UCLA in June 2012. His areas of expertise are conjugated polymers, electrochemistry and thin-film composite devices, with a particular interest in energy applications. As an MLK Visiting Scholar, he will work closely with Professor Paula Hammond’s research group in the Department of Chemical Engineering.