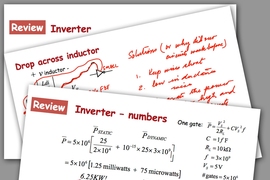 ↓ Download Image
Caption: A series of screenshots from 6.002x, the first course offered through <i>MITx</i>.

Caption:
A series of screenshots from 6.002x, the first course offered through <i>MITx</i>.
Last December, MIT announced the creation of MITx, an ambitious project to recreate the MIT classroom experience online; in March, the MITx prototype course — “Circuits and Electronics,” or 6.002x in MIT’s course-numbering system — debuted. In May, MIT and Harvard University jointly announced the creation of edX, an organization that will further develop the MITx platform and enable other universities to use it as well.

As MIT and Harvard gear up to offer new edX courses in the fall, the edX team is taking stock of its experience with 6.002x and beginning to incorporate what it learned into the system’s design.

While the rate of attrition may seem high, Anant Agarwal, the president of edX and a professor of computer science and engineering at MIT, points out, “if you look at the number in absolute terms, it’s as many students as might take the course in 40 years at MIT.”

Agarwal also believes that the rate of completion will increase as more courses are added to the edX catalog. “In some sense, this course popped up out of nowhere,” he says. “It requires a background in physics, a background in calculus, a background in differential equations. Over time, edX will have courses on each of those three prerequisites, and we can point students to those courses if they don’t have the background.”

One thing edX will not do in order to boost the rate of success, Agarwal says, is make courses easier. “We will not water down the courses,” he says. “They will continue to be MIT-hard or Harvard-hard.”

Ultimately, students from more than 160 countries registered for 6.002x. The majority of the traffic on the MITx site came from the United States, India and the United Kingdom, but the country that followed these top three was something of a surprise: Colombia. Rounding out the top 10 were Spain, Pakistan, Canada, Brazil, Greece and Mexico.

Another pleasant surprise, Agarwal says, was how much initiative the students showed in augmenting or creatively reappropriating the MITx technology. A group of students who had interacted regularly on the 6.002x discussion forum were disappointed that the natural follow-up course, 6.003, “Signals and Systems,” would not be offered via MITx in the fall. So, using the 6.003 course materials already available online through MIT’s OpenCourseWare initiative, they created their own online course, which they’ve dubbed 6.003z.

“They’re now a bonded community,” Agarwal says. “They asked us if there was a way they could keep the community alive. So we agreed not to take the [6.002x] website down. All the students who had previous accounts could continue interacting on the discussion forums and so on.”

In another instance, a Mongolian teacher named Tony Kim '09, MEng '11 used 6.002x as the basis for a high school course he taught. Students were able to use the online textbook for 6.002x, watch the recorded lectures and conduct experiments on the circuit-board simulator, but they also worked with real physical circuit components under Kim’s direction and tackled problems of his devising. One of Kim’s 15-year-old students got a perfect score on the final exam — an achievement that should not be diminished, Agarwal says, by the fact that the Mongolian teen shared that distinction with 340 other 6.002x students. “It’s a very hard exam,” Agarwal says.

Students also wrote their own programs to augment the MITx platform, which the edX team made available through the wiki dedicated to 6.002x. An online text viewer that made the course textbook easier to read from mobile devices was one example; a program that allowed students to queue up several videos to play in sequence, so that they could watch lectures while performing other household tasks, was another.

Agarwal says the edX development team will work to make it easier for students to customize course content. For instance, students with a lot of demands on their time might want to spend a full year rather than just a semester on a course, and would want to modify homework deadlines and exam dates accordingly.

From the start, the edX platform was envisioned not only as a means of delivering course content, but also as a test bed for educational experiments. The first such experiment has already been performed by an alumna of Harvard’s Graduate School of Education who’s now working at Microsoft’s research lab in Bangalore, India. She conducted a usability study in which students compared versions of video lectures in which diagrams were presented either as digitally rendered PowerPoint slides or as shaky hand drawings that took shape as the professor lectured, much as they might on a classroom blackboard.

Similarly, Agarwal says, several weeks into the course, after canvassing student responses to the course, the MITx team begin posting videos in which the course teachers worked problems out onscreen, rather than just presenting students with completed solutions — a feature that is certain to become a staple of future edX courses. “We learned a lot about how to do a course like this,” Agarwal says. “Clearly, that is influencing us a lot in where we go from here.”