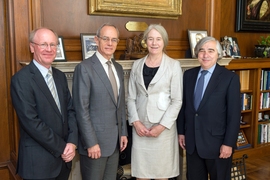 "As the largest energy investor in the U.S. over the past five years, BP is pleased to extend its on-going commitment to academic research in this country through our continued collaboration with MIT,” said Lamar McKay, Chairman and President of BP America, Inc. “Addressing the nation’s energy challenges requires long-term partnerships between the private sector and leading scientific institutions. We believe the MITEI program we helped found is an example of the critical linkage between energy and technology.”

Launched in 2006 with BP as the inaugural founding member, the MITEI conducts multidisciplinary research aimed at tackling complex energy challenges like increasing energy supply, improving efficiency, and addressing environmental impacts of energy consumption. To date, the initiative has sponsored hundreds of energy-related projects ranging from unconventional sources of hydrocarbons to renewables and nuclear fusion.

“The MITEI has become a model for large-scale multidisciplinary research in partnership with industry,” said MIT President L. Rafael Reif. “BP’s early engagement and support were essential and we are very happy that this renewed commitment signals success in meeting key objectives of both BP and MIT.”

“BP is a valued partner in defining and addressing fundamental energy challenges,” according to Professor Ernest J. Moniz, MITEI Director. “It provides invaluable industry perspectives and has done much to shape the overall mission of the MIT Energy Initiative. We are thrilled that BP has decided to extend its membership.”

Within the program, BP scientists and engineers and MIT researchers collaborate across a range of fields including energy conversion, energy sustainability, materials science, and the modelling of global energy production and use.

“MIT faculty and students have proved to be invaluable research partners who embody the Institute’s motto ‘Mens et Manus’ or ‘Mind and Hand’,” said Ellen Williams, BP’s Chief Scientist. “They bring a powerful combination of scientific innovation and rigor along with an awareness of the practical considerations of large-scale energy provision. Over the last five years, MITEI research has provided BP with a range of practical solutions and trusted scientific data, from state-of-the-art process optimisation and modelling tools to ground-breaking analysis of water use in energy production.“