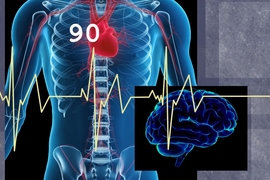 Credits:
Graphic: Christine Daniloff
As the United States seeks to reinvigorate its job market and move past economic recession, MIT News examines manufacturing’s role in the country’s economic future through this series on work at the Institute around manufacturing.

Basic advances in medicine create a need for further medical advances, among other things. The general increase in life expectancy over the last several decades, in America and globally, means that more people require more kinds of sophisticated medical care later in life. Indeed, numerous economic studies show that the demand for health care in the United States, for one, will only increase over the long run.

Therefore, while medicine has kept evolving — we now benefit from surgical techniques and drugs that did not exist two decades ago — the unrelenting need for medical innovation remains intact. MIT’s Medical Electronic Device Realization Center (MEDRC) aims to address this issue by using advances in microelectronics to help develop new medical technologies that could be manufactured at large volumes.

Sodini and the other co-founders of the MEDRC — Brian W. Anthony, a research scientist in MIT’s Laboratory for Manufacturing and Productivity, and Joel Voldman, an associate professor in MIT’s Department of Electrical Engineering and Computer Science — have identified five current research focuses. These include noninvasive tools to gather internal bodily data; better ultrasound; wearable devices that monitor vital signs; devices to produce faster results for clinical blood, urine and saliva tests; and better ways of extracting useful information from tests. Their long-range goal is to help medical care become more accurate, quicker and more flexible for doctors and patients alike.

MEDRC’s directors have recruited industry partners and are actively discussing their ideas with a broad set of doctors, engineers and corporate executives in forums such as a workshop they are hosting in May.

As one product of these talks, this month the MEDRC signed a three-year agreement with Maxim Integrated Products, a semiconductor firm based in Sunnyvale, Calif. Currently, MIT and Maxim researchers are working to produce a device for measuring intracranial pressure (ICP), or the pressure inside the skull, without having to operate on patients. That makes Maxim the third firm to partner with the MEDRC, which was founded with initial support from General Electric and Analog Devices — whose founder, Ray Stata ’57, SM ’58 is a life member emeritus of the MIT Corporation, the Institute’s board of trustees.

“We conceived of the MEDRC in order to bring these kinds of companies together here, along with the technologists at MIT and the physicians across the river [in Boston],” Sodini says. “We want to increase the interactions between [them].”

Consider the case of Maxim, a firm that designs integrated circuits for a wide range of computing and consumer products and is now expanding its reach in the medical-device industry. Many people who are at risk of stroke or have endured a serious head injury can benefit from measurement of their ICP; an increase can often signal a dangerous decrease in blood supply to the brain. But obtaining such information is very difficult to do, since it currently entails surgically drilling into the skull and placing a transducer inside.

It would be useful, then, if a noninvasive method of measuring ICP could be developed: About 800,000 adults in the United States have strokes every year, making strokes the third-leading cause of death in the country.

Starting this spring as part of the MIT-Maxim partnership, Maxim design director Brian Brandt, an electrical engineer who has been working in the company’s Chelmsford, Mass., office, is now a visiting scientist at MIT; Brandt is working alongside an engineering graduate student, Sabino Pietrangelo, who is developing a noninvasive ICP-measuring prototype. In all, Maxim will provide funding for three MIT PhD students over the three-year period.

To be sure, measuring ICP is a difficult task that interests many researchers; last week, scientists in MIT’s Research Laboratory of Electronics released a new paper on the topic. But by creating a structure for prototyping and funding to back it, the MEDRC concept, as Anthony notes, is intended to lead new concepts out of technology’s so-called  “Valley of Death,” in which promising ideas languish in labs, uncommercialized. And Maxim, for its part, sees its initial MEDRC project as part of a larger investment in health care. Currently Maxim is identifying a second medical product area to research at MIT.

“This is the best place in the world to do something like MEDRC,” says Brandt, noting the confluence of medical firms, academic researchers and high-powered hospitals in the Cambridge and Boston region.

‘Trying to change the way people think’ about medical tools

The MEDRC requires that industry partners have one scientist in residence on campus, to better facilitate intellectual collaboration with other researchers. GE, for instance, has sent to campus Kai Thomenius, the chief technologist of GE Global Research and a recognized expert in ultrasound, to enhance its own effort to make basic ultrasound more consistent and easier to use.

General-purpose ultrasound devices are also a longtime interest of Anthony, who is also the director of MIT’s Master of Engineering in Manufacturing program. The goal, Anthony says, is to develop everyday ultrasound devices that are both easier to use and provide consistent points of reference for multiple ultrasound scans over time.

“Ultimately what you would like to do in any medical-imaging scenario is to have an image, and examine if an object in that image, a tumor or vessel, has changed, and track that over time,” Anthony says. The device being developed at MEDRC would ensure that ultrasound images are taken from the same point in two ways: by recognizing the patient’s skin where the device rests, and from similarities in the ultrasound images themselves.

Analog Devices is more focused on developing smaller devices that can measure vital signs — heart rate and blood pressure, among others — on mobile platforms. That could enable data to be gathered while patients are at home, not only in clinics or hospitals. “The whole idea of continuous monitoring versus spot-checking, when you go see a physician or clinician, is what’s being enabled by many of these diagnostic devices,” Sodini says.

Many other kinds of diagnoses, he adds, could be made more readily with the help, in part, of microelectronics. “The way we do lab tests today is the equivalent of the way computing was done when you handed a deck of cards to the computer operator and he gave you back a big printout from the IBM blue machine back there somewhere,” Sodini says. “Instead, you want to bring that equipment down as close to the customer or patient as you can.” It is possible, he offers, that “somebody who’s bedridden and needs these tests might be able to live at home instead of having to live in the hospital or a care center.”

The MEDRC co-founders also suggest it would be desirable to forge partnerships with some of the Boston area’s top-tier pharmaceutical companies, since nimbler diagnostic tools could help doctors better track the effects of medicines, or even help new products move through the lengthy clinical trials process.

“We’re not just trying to lower the costs of today’s technology,” Sodini says. “We’re trying to change the way people think about using those tools.”