For a large range of practically useful cases, MIT researchers find a way to increase the speed of one of the most important algorithms in the information sciences.
Larry Hardesty, MIT News Office
Publication Date:
Press Inquiries 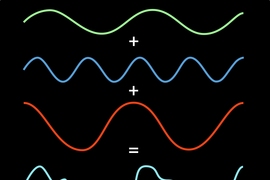 Credits:
Graphic: Christine Daniloff
The Fourier transform is one of the most fundamental concepts in the information sciences. It’s a method for representing an irregular signal — such as the voltage fluctuations in the wire that connects an MP3 player to a loudspeaker — as a combination of pure frequencies. It’s universal in signal processing, but it can also be used to compress image and audio files, solve differential equations and price stock options, among other things.

At the Symposium on Discrete Algorithms (SODA) this week, a group of MIT researchers will present a new algorithm that, in a large range of practically important cases, improves on the fast Fourier transform. Under some circumstances, the improvement can be dramatic — a tenfold increase in speed. The new algorithm could be particularly useful for image compression, enabling, say, smartphones to wirelessly transmit large video files without draining their batteries or consuming their monthly bandwidth allotments.

Like the FFT, the new algorithm works on digital signals. A digital signal is just a series of numbers — discrete samples of an analog signal, such as the sound of a musical instrument. The FFT takes a digital signal containing a certain number of samples and expresses it as the weighted sum of an equivalent number of frequencies.

“Weighted” means that some of those frequencies count more toward the total than others. Indeed, many of the frequencies may have such low weights that they can be safely disregarded. That’s why the Fourier transform is useful for compression. An eight-by-eight block of pixels can be thought of as a 64-sample signal, and thus as the sum of 64 different frequencies. But as the researchers point out in their new paper, empirical studies show that on average, 57 of those frequencies can be discarded with minimal loss of image quality.

“In nature, most of the normal signals are sparse,” says Dina Katabi, one of the developers of the new algorithm. Consider, for instance, a recording of a piece of chamber music: The composite signal consists of only a few instruments each playing only one note at a time. A recording, on the other hand, of all possible instruments each playing all possible notes at once wouldn’t be sparse — but neither would it be a signal that anyone cares about.

The new algorithm — which associate professor Katabi and professor Piotr Indyk, both of MIT’s Computer Science and Artificial Intelligence Laboratory (CSAIL), developed together with their students Eric Price and Haitham Hassanieh — relies on two key ideas. The first is to divide a signal into narrower slices of bandwidth, sized so that a slice will generally contain only one frequency with a heavy weight.

If it so happens that the one frequency with a heavy weight is at the edge of the filter, however, it could end up so attenuated that it can’t be identified. So the researchers’ first contribution was to find a computationally efficient way to combine filters so that they overlap, ensuring that no frequencies inside the target range will be unduly attenuated, but that the boundaries between slices of spectrum are still fairly sharp.

Once they’ve isolated a slice of spectrum, however, the researchers still have to identify the most heavily weighted frequency in that slice. In the SODA paper, they do this by repeatedly cutting the slice of spectrum into smaller pieces and keeping only those in which most of the signal power is concentrated. But in an as-yet-unpublished paper, they describe a much more efficient technique, which borrows a signal-processing strategy from 4G cellular networks. Frequencies are generally represented as up-and-down squiggles, but they can also be though of as oscillations; by sampling the same slice of bandwidth at different times, the researchers can determine where the dominant frequency is in its oscillatory cycle.

Two University of Michigan researchers — Anna Gilbert, a professor of mathematics, and Martin Strauss, an associate professor of mathematics and of electrical engineering and computer science — had previously proposed an algorithm that improved on the FFT for very sparse signals. “Some of the previous work, including my own with Anna Gilbert and so on, would improve upon the fast Fourier transform algorithm, but only if the sparsity k” — the number of heavily weighted frequencies — “was considerably smaller than the input size n,” Strauss says. The MIT researchers’ algorithm, however, “greatly expands the number of circumstances where one can beat the traditional FFT,” Strauss says. “Even if that number k is starting to get close to n — to all of them being important — this algorithm still gives some improvement over FFT.”