A flow of creativity 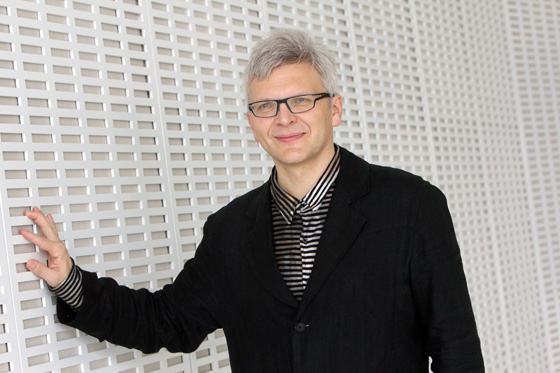 In May 2011, near the end of MIT’s 150th anniversary celebration, a giant inflatable screen resembling the letters “MIT” was fastened to a floating platform and launched into the Charles River. Called “Liquid Archive,” and designed by Nader Tehrani and Gediminas Urbonas, the piece allowed viewers to engage with images of unrealized projects that other artists, such as MIT’s Gyorgy Kepes, had created in the 1970s while proposing improvements to the Charles.

Like much of Urbonas’ work, “Liquid Archive” was bold, technologically savvy, informed by a keen sense of history, and collaborative in character. Those elements in his work come, in good part, from the momentous changes he experienced firsthand in his native Lithuania as it suddenly changed from being a part of the totalitarian Soviet Union to an independent state.

“Every day here at MIT we talk about the importance of art in transforming society,” says Urbonas, who has been at the Institute since 2009 and was recently granted tenure in the School of Architecture and Planning. “I experienced this notion not from theories, but through my life. The transformation of the political, social, economic and value systems all had an enormous effect on the formation of myself as an artist.”

Urbonas’ work is also informed by technological shifts dating to the 1980s and 1990s. “The introduction of computer technology and networks coincided with glasnost and perestroika,” says Urbonas, the Mitsui Career Development Associate Professor in Contemporary Technology. “It was a moment to launch a new vision and new values.”

Perhaps befitting someone who has seen the world reinvent itself, Urbonas works in many media to create dynamic art projects. For the Venice Biennale in 2007, he and his partner, Nomeda Urbonas, created the award-winning “Villa Lituania,” an architectural project from which 1,200 trained homing pigeons were released from a truck on a barge in the Venetian Lagoon. The title of the project refers to the onetime Lithuanian embassy in Rome, which remains in Russian possession; as such, Urbonas holds, it is “the last occupied territory of Lithuania.” The pigeons were messengers carrying a “sign of peace” regarding what Urbonas calls Europe’s “unresolved traumatic histories.”

Other Urbonas projects involve installations, film and, quite often, materials dug up from scholarly archives during research projects. In 2011, for example, Urbonas and several collaborators created the “Disobedience Archive,” an installation in MIT’s Media Lab atrium featuring a “garden corridor” of display cases and video screens with archival materials showing how the camera has been used as a tool for artistic intervention in the public sphere.

“History should not be taught from the perspective of power,” Urbonas says. “There should be visibility for minor stories, minor narratives, voices that are not represented, and that is where art can apply its sensibility, knowledge and tools.”

Studying new art thanks to ‘a flaw in the system’

Urbonas, 46, was born and raised in Vilnius, Lithuania’s capital, back when it was part of the Soviet Union.

“Half of my life, I spent under a totalitarian regime,” he says.

Urbonas’ father was an electrical engineer who built playthings for his son out of spare parts used in security systems, which may explain some of Urbonas’ own comfort with technology. “I was raised in this environment with a scarcity of toys, so he was always constructing toys for me, and teaching me how to do things for myself,” Urbonas explains. “I was surrounded by all these different gadgets blinking, beeping. It was a very do-it-yourself culture at home, as we were always soldering. I was kind of raised in a lab.”

Urbonas’ first experiences with visual art occurred because his father also taught him to play chess when he was just three years old; meanwhile, a kindergarten classmate knew how to draw fire engines. “We exchanged,” Urbonas recalls. “I taught him how to play chess, and he taught me how to draw.”

Within a few years, Urbonas was going to a local art club. At age 10, he gained entry to Lithuania’s elite art school, and then attended the country’s university-level art academy, in Vilnius. There, Urbonas says, he had “brilliant teachers” who, as quiet dissenters from the regime, had failed to land big state-funded public art commissions and became instructors instead: “This was a flaw in the [Soviet] system that they overlooked.” His teachers passed on the influence of people such as the avant-garde Russian artists Alexander Rodchenko and Kazimir Malevich, and the Bauhaus group of modernists, who advocated for the integration of art, technology and design to transform society.

In this period, Urbonas also served a compulsory two years in the Soviet armed forces, from 1984 to 1986, tracking NATO military movements in the Baltic and from Warsaw to Leningrad (now St. Petersburg).

“In a way, the army was for me like another education,” Urbonas says. “It brought me closer to understanding advanced technologies and their influence in culture.”

When the Soviet Union disintegrated, in the early 1990s, Urbonas was prepared to launch his own independent practice, while Eastern Europe opened itself to free expression and free association among cultural producers. In 1993, Urbonas co-founded Jutempus, an open space for artists to create and collaborate, transforming Lithuania’s former Railroad Workers’ House of Culture into a media lab for interdisciplinary research.

He also launched a collaborative practice with Nomeda Urbonas, exploring the economic and political conditions within countries in transition. Another socially engaged project he co-founded in 2005 was the “pro-test lab,” transforming the space in front of a prominent cinema in Vilnius into an arena for protests against the “corporate privatization of public space” in Lithuania, as he puts it, Urbonas describes the effort as a “lab testing methods and tools for collective forms of participation” in civic society.

Teaching, research, and the creation of artwork

By the mid-2000s, Urbonas’ profile had risen in Europe and overseas; his work has been exhibited in the contemporary art biennales in Berlin, Gwangju (in South Korea), Lyon, Moscow and Sao Paulo, among other international exhibitions, including solo shows at the Venice Biennale and the Museum of Contemporary Art in Barcelona. In 2005, he took a job as a professor at the Norwegian University of Science and Technology in Trondheim, and moved to MIT four years later. Among the benefits of the academic life for an artist, Urbonas says, is teaching, which he calls “an important and complementary component of my research.”

One of his classes, “Learning from the River,” dug into the MIT archives to find documents showing how many thinkers — such as Kepes — have reimagined the environs of the Charles River, in so doing embracing the civic engagement of art. That research led directly to the creation of the “Liquid Archive” sculpture, as well as further, related exhibitions in 2012 held in Berlin, Leipzig and Schwerin, Germany, and a longer-term collaboration with scholars in Oxford, England.

Ultimately, Urbonas points out, for all his interest in the past, being at MIT fits with the career and life of someone who has learned to embrace change and look forward.

“I’m just amazed at how many things are continuously in flux, transforming and changing here,” Urbonas says. “This is what I love about MIT. We are responsible for this dynamism. It is not being shaped by someone else’s invisible hand.”