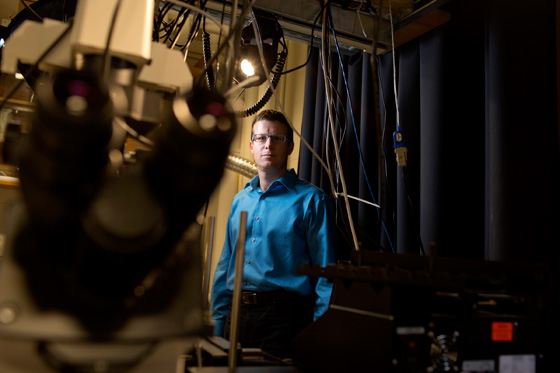 Roman Stocker was introduced to the world of civil engineering early, often, and all over the place. Born in Vienna to parents from the South Tyrol, a bilingual region in northern Italy, Stocker says, “We moved around a bit.” That’s a bit of an understatement.

Stocker’s father is a civil engineer who moved wherever his work took him. The family’s time in Vienna coincided with his work managing the construction of a bridge; they then moved to Nigeria for the construction of a large dam. After two years, the Stockers relocated to a remote desert in Yemen, site of a new highway to Saudi Arabia.

From a very early age, Stocker says, he was exposed to large construction sites. He grew up experiencing firsthand the rigors, and the excitement, of these remote conditions, far from most modern conveniences, where many things needed to be built from scratch. These early experiences also kindled a lifelong interest in languages, cultures, ecosystems, travel, and the varieties of human experience and natural environments.

Often during his childhood, Stocker accompanied his father on remote hiking trips. They would dam up little streams with rocks and dirt and moss, learning in action about how water behaves and how to control it. “There’s a physics side to it, and an aesthetic side,” he recalls. “Water is powerful, important and beautiful. I don’t know if those early games are what made me choose civil engineering or not,” he says, but “it was a never-ending challenge, and it left me with this feeling that working with water would make for an exciting career.”

Fluid mechanics has become a defining element of Stocker’s work as an associate professor of civil and environmental engineering at MIT. But he has often combined fluid mechanics with other disparate areas of inquiry — including microbiology, oceanography and microtechnology.

Stocker attended a classical high school in Italy whose curriculum was “the farthest you can get from science — a study of Italian literature, history, philosophy, Latin, ancient Greek.” His coursework included demanding translations from ancient Greek: “You could call this a very humanistic effort in a way, but it’s surprisingly similar to the scientific puzzle-solving that I now apply every day in deciphering environmental processes,” he says.

His polyglot surroundings and schooling left him with a passion for languages (he speaks Italian, German, English, French and some Spanish) and for exploring new environments, Stocker says — one he shares with his wife, Micaela. The two met as engineering students at the University of Padua, and then were together as graduate students in Australia, where Stocker did research on fluid dynamics in lakes. They married after moving to Boston; today she works as a structural engineer, designing large tunnels and cable-stayed bridges. The couple has a 4-year-old daughter, Alessandra, and a son, Sebastian, born this November.

While engineering and fluid mechanics have been part of Stocker’s work since his undergraduate years, “biology came much later,” he says. “It took me time to realize that the interface between scientific disciplines — in my case, fluid mechanics and biology — is where some of the most interesting open problems lie, and I largely credit MIT for allowing me to realize this vision.”

In one project, Stocker studied how cats lap water and found that this everyday process hides intriguing fluid mechanics: To lap, cats do not scoop water into their mouths, but instead draw up a column of liquid that they create through a perfect balance between gravity and inertia. This research was partly conducted in Stocker’s home with the family cat, Cutta Cutta, and was published in Science with a picture of his cat on the cover.

Most of Stocker’s research involves much smaller organisms — although it turns out many of these can have a significant impact on the environment. His studies of plankton in the ocean showed how these microorganisms can swim to create thin, dense layers a few meters below the surface, entire floating ecosystems that had long eluded detection because of their thinness. These microbial communities are pivotal for the marine food web, and may play important roles in climate dynamics.

Learning about “how microbes swim, how they sense, how they survive in the ocean, is similar to learning a new language, except this is the language of biology and of nature,” Stocker says. As someone whose education was in other areas, plunging into the mysteries of microbiology “constantly puts me a tad outside my comfort zone,” he says “and increases the excitement of discovery.”

Stocker has developed microfluidic devices to test the reactions of microbes to different chemical stimuli. Microfluidics was a newly emerging discipline as he was beginning his research, and few others had applied this technology — in which streams of flowing liquid can be studied with a microscope on a device the size of a stick of gum — to the study of environmental processes, such as the actions and functions of marine microbes. It proved to be a fertile area of research, enabling Stocker to closely mimic the environmental conditions that microbes experience in the ocean and to study their behavior with unprecedented resolution.

Previously, for example, oceanographers had assumed that microbes in the ocean were passive feeders, living in a uniform, dilute soup of nutrients and making use of whatever food happened to flow past them. The thinking was that large-scale ocean currents and turbulence would render irrelevant any tiny movements by a microorganism. But Stocker’s microfluidic experiments proved that to be wrong.

In fact, it turns out that marine microbes do move strongly toward certain chemicals or nutrients. While it’s true that their motions are tiny compared to those of the currents around them, that’s not what really matters: Microbes and the nutrients around them are all swept along together in the currents, so tiny movements within these microenvironments can make a big difference. But until Stocker and his colleagues figured out how to observe these microbial movements in the lab, and saw how the organisms responded to different chemicals, nobody had realized how pervasive and important these behaviors could be.

“It was an ‘aha’ moment,” Stocker recalls of his realization that microfluidics could be used to study the microscale workings of the marine environment. “It was a unique opportunity to bring these two things together” — essentially, to do laboratory experiments on ecological interactions at a minuscule scale.

That, Stocker says, has become “a defining aspect of our group,” which includes physicists, biologists and engineers. Each tiny channel in a microfluidic device can have seawater and microbes injected into it, to “mimic what happens to bacteria in their natural environment,” he says. “Powerful microscopes and video cameras then allow us to directly observe what microbes do in response to environmental stimuli, such as nutrients or fluid flow.”

The knowledge to be gained could have great impact: For example, these marine microbes play a significant role in the cycling of carbon from the atmosphere to the ocean surface and ultimately to the deep ocean, where it can remain buried for millennia; they also emit and transform sulfur compounds that form the nuclei of raindrops and can alter patterns of solar irradiation.

As Stocker explains it, he has helped turn around the view that marine microbes live in a homogeneous soup by introducing technology to study how they find and make use of gradients, such as the boundaries between nutrient-poor and nutrient-rich microregions.

That’s not unlike the way Stocker does his own work. “I have one foot in fluid mechanics and one foot in environmental science,” he says. “What I enjoy the most is contributing to new discoveries along the gradient between these two disciplines.”