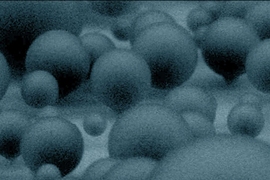 Credits:
Image: Nenad Miljkovic
The condensation of water is crucial to the operation of most of the powerplants that provide our electricity — whether they are fueled by coal, natural gas or nuclear fuel. It is also the key to producing potable water from salty or brackish water. But there are still large gaps in the scientific understanding of exactly how water condenses on the surfaces used to turn steam back into water in a powerplant, or to condense water in an evaporation-based desalination plant.

New research by a team at MIT offers important new insights into how these droplets form, and ways to pattern the collecting surfaces at the nanoscale to encourage droplets to form more rapidly. These insights could enable a new generation of significantly more efficient powerplants and desalination plants, the researchers say.


The new results were published online this month in the journal ACS Nano, a publication of the American Chemical Society, in a paper by MIT mechanical engineering graduate student Nenad Miljkovic, postdoc Ryan Enright and associate professor Evelyn Wang.

Although analysis of condensation mechanisms is an old field, Miljkovic says, it has re-emerged in recent years with the rise of micro- and nanopatterning technologies that shape condensing surfaces to an unprecedented degree. The key property of surfaces that influences droplet-forming behavior is known as “wettability,” which determines whether droplets stand high on a surface like water drops on a hot griddle, or spread out quickly to form a thin film.

It’s a question that’s key to the operation of powerplants, where water is boiled using fossil fuel or the heat of nuclear fission; the resulting steam drives a turbine attached to a dynamo, producing electricity. After exiting the turbine, the steam needs to cool and condense back into liquid water, so it can return to the boiler and begin the process again. (That’s what goes on inside the giant cooling towers seen at powerplants.)

Typically, on a condensing surface, droplets gradually grow larger while adhering to the material through surface tension. Once they get so big that gravity overcomes the surface tension holding them in place, they rain down into a container below. But it turns out there are ways to get them to fall from the surface — and even to “jump” from the surface — at much smaller sizes, long before gravity takes over. That reduces the size of the removed droplets and makes the resulting transfer of heat much more efficient, Miljkovic says.

One mechanism is a surface pattern that encourages adjacent droplets to merge together. As they do so, energy is released, which “causes a recoil from the surface, and droplets will actually jump off,” Miljkovic says. That mechanism has been observed before, he notes, but the new work “adds a new chapter to the story. Few researchers have looked at the growth of the droplets prior to the jumping in detail.”

That’s important because even if the jumping effect allows droplets to leave the surface faster than they would otherwise, if their growth lags, you might actually reduce efficiency. In other words, it’s not just the size of the droplet when it gets released that matters, but also how fast it grows to that size.

“This has not been identified before,” Miljkovic says. And in many cases, the team found, “you think you’re getting enhanced heat transfer, but you’re actually getting worse heat transfer.”

In previous research, “heat transfer has not been explicitly measured,” he says, because it’s difficult to measure and the field of condensation with surface patterning is still fairly young. By incorporating measurements of droplet growth rates and heat transfer into their computer models, the MIT team was able to compare a variety of approaches to the surface patterning and find those that actually provided the most efficient transfer of heat.

One approach has been to create a forest of tiny pillars on the surface: Droplets tend to sit on top of the pillars while only locally wetting the surface rather than wetting the whole surface, minimizing the area of contact and facilitating easier release. But the exact sizes, spacing, width-to-height ratios and nanoscale roughness of the pillars can make a big difference in how well they work, the team found.

“We showed that our surfaces improved heat transfer up to 71 percent [compared to flat, non-wetting surfaces currently used only in high-efficiency condenser systems] if you tailor them properly,” Miljkovic says. With more work to explore variations in surface patterns, it should be possible to improve even further, he says.

The enhanced efficiency could also improve the rate of water production in plants that produce drinking water from seawater, or even in proposed new solar-power systems that rely on maximizing evaporator (solar collector) surface area and minimizing condenser (heat exchanger) surface area to increase the overall efficiency of solar-energy collection. A similar system could improve heat removal in computer chips, which is often based on internal evaporation and recondensation of a heat-transfer liquid through a device called a heat pipe.

Chuan-Hua Chen, an assistant professor of mechanical engineering and materials science at Duke University who was not involved in this work, says, “It is intriguing to see the coexistence of both sphere- and balloon-shaped condensate drops on the same structure. … Very little is known at the scales resolved by the environmental electron microscope used in this paper. Such findings will likely influence future research on anti-dew materials and … condensers.”

The next step in the research, underway now, is to extend the findings from the droplet experiments and computer modeling — and to find even more efficient configurations and ways of manufacturing them rapidly and inexpensively on an industrial scale, Miljkovic says.

This work was supported as part of the MIT S3TEC Center, an Energy Frontier Research Center funded by the U.S. Department of Energy.