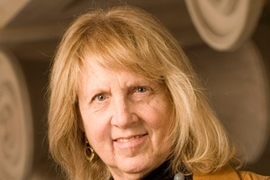 Credits:
Photo: Steve Dunwell
Alice H. Amsden, an expert in economic development who served as the Barton L. Weller Professor of Political Economy in MIT’s Department of Urban Studies and Planning, died suddenly on March 14 at her home in Cambridge. She was 68.

A prolific scholar, Amsden wrote extensively about the process of industrialization in emerging economies, particularly in Asia. Her work frequently emphasized the importance of the state as a creator of economic growth, and challenged the idea that globalization had produced generally uniform conditions in which emerging economies could find a one-size-fits-all path to prosperity.

“She will be sorely missed,” said Amy K. Glasmeier, professor of geography and regional planning and head of MIT’s Department of Urban Studies and Planning. “Upon hearing the news, one student said to me, ‘she was a titan’ in the field of development. While others took the conventional way, Alice took another path. She was fearless. By any measure, Alice was one of the most, if not the most, accomplished heterodox economist in the world.”

Amsden wrote or co-authored seven books, and dozens of journal articles, essays and chapters in edited volumes. She also wrote frequently for general-interest publications; her work appeared in The New York Times, The Nation, Dissent, Boston Review, Technology Review and others.

One of Amsden’s best-known books was “The Rise of ‘The Rest’: Challenges to the West from Late-Industrializing Economies,” published by Oxford University Press in 2001. In it, she examined the way Asian countries such as South Korea and Taiwan had helped produce growth through state-promoted industrialization. By contrast, Amsden observed, some Latin American countries had accommodated a greater degree of overseas investment, leaving more economic decisions in the hands of multinational firms, not state actors.

Amsden was a co-winner of the 2002 Leontief Prize, along with Harvard University’s Dani Rodrik, an annual award granted by Tufts University in recognition of important “contributions to economic theory that … support just and sustainable societies.” The prize is named for the prominent late economist Wassily Leontief.

In her acceptance remarks for the Leontief Prize, Amsden stressed the importance of the close study of developing countries, because “there are a lot of people out there that are disappointed and that desperately want improved living conditions and social standards.”

Amsden was born in New York City, received her undergraduate degree from Cornell University in 1965, and her PhD from the London School of Economics in 1971. She began her career as an economist at the Organisation for Economic Co-operation and Development (OECD), and before joining MIT in 1994, taught at the University of California at Los Angeles, Barnard College, Harvard Business School, and The New School. At MIT, she held the Ellen Swallow Richards Institute Chair from 1994 until 1999, when she was named the Weller Professor.

Beyond her teaching and scholarship, Amsden served as a consultant to the OECD, the World Bank, and multiple programs within the United Nations. In 2009, she was appointed by U.N. Secretary General Ban Ki-moon to a three-year seat on the U.N. Committee on Development Policy, part of the U.N. Economic and Social Council; the committee provides advice to the council on a wide range of economic development issues.

The Department of Urban Studies and Planning will be hosting a commemorative symposium and memorial for Amsden on Oct. 19-20 in the new Media Lab building. More details will be available in the fall.