A labor of love

Caption:
Walter Lewin demonstrates one of his famous lectures, showing that a pendulum’s period remains constant regardless of mass.
Credits:
Photo: Dominick Reuter

Caption:
Lewin Swings back and forth on the pendulum.
Credits:
Photo: Dominick Reuter

Caption:
Lewin delivered his final lecture in the same hall where he had delivered more than 800 previous ones — 26-100.
Credits:
Photo: Dominick Reuter

Caption:
An overflow crowd came to watch Lewin demonstrate his famous lectures, which have been viewed by more than 5 million people on sites like MIT's OpenCourseWare.
Credits:
Photo: Dominick Reuter

Caption:
Lewin rides a tricycle powered by a fire extinguisher.
Credits:
Photo: Dominick Reuter
On Monday night, MIT’s largest lecture hall filled with the hum of a capacity crowd, creaking with anticipation in their wooden chairs. People young and old jockeyed for seats; the unlucky were left to stand in the aisles. As more people filtered in, the hum morphed into a buzz — until a man with wild white hair, wearing a shirt the colors of sherbet, took the stage, commanding, “Take your seats, please.”

Walter Lewin, MIT professor emeritus of physics, had returned to Building 26-100 — the hall where he has given more than 800 lectures — to deliver one last talk. The visit was pegged to the release of his new book, For the Love of Physics: From the End of the Rainbow to the Edge of Time — A Journey Through the Wonders of Physics (Free Press), written with Warren Goldstein. Many audience members held copies of the book, released just two weeks ago, for Lewin to sign. Many others held cell phones, recording the event and no doubt uploading the lecture to YouTube.

Videos of Lewin’s lectures on MIT OpenCourseWare (OCW), YouTube and iTunes U have been viewed more than 5 million times by people all over the world — including Bill Gates, who has confessed to repeated viewings. The online traffic has made the professor with a penchant for colorful rings and brooches an international star, as well as an unofficial ambassador for physics.

During his Monday evening lecture, Lewin recreated some of his most popular demonstrations, including a famous experiment showing that a pendulum’s period remains constant regardless of mass. Lewin, 75, confessed that it had been 12 years since the last time he performed the stunt — a tricky exercise requiring him to cling to a five-meter pendulum while operating a stopwatch. 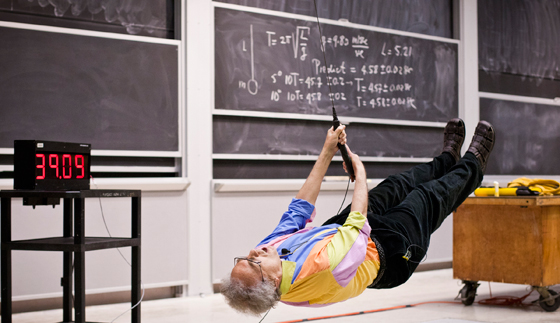 Walter Lewin swings across Room 26-100 during a re-enactment of one of his famous demonstrations — this one showing that a pendulum’s period remains constant regardless of mass.
Photo: Dominick Reuter
Lewin held on, swinging back and forth as the audience counted the number of swings. At 10, Lewin dropped to the floor, spent, to whoops and hollers from the crowd. According to the timer, the pendulum’s period was the same with or without Lewin aboard. Triumphant, he shouted, “I told you! Physics works!”

Lewin’s contagious enthusiasm is in ample supply in For the Love of Physics, in which he describes “little wonders of the everyday world,” urging readers to “focus on the exquisite beauty of physics, rather than on the minutiae of the mathematics.” In his book, Lewin expands on his most popular lectures, from his pendulum-swinging demonstrations to a lesson in air pressure delivered using two paint cans and a rifle.

All the experiments detailed in the book can be viewed online. However, For the Love of Physics lets the reader in on topics that Lewin’s videos have not touched upon — namely, his important research contributions, and his own personal journey.

Lewin grew up in the Netherlands amid the turmoil of World War II. His family went into hiding soon after the Nazis seized control of the country. Many of Lewin’s relatives were captured and sent to the gas chambers, something he still finds difficult to contemplate. To protect the family, Lewin’s father — who, unlike his mother, was Jewish — decided one day to simply leave without telling anyone. His mother was left to raise the children and run a small school she and her husband had started together.

During those harsh winters, the family kept warm by wearing “rough, scratchy, poor-quality wool,” a material Lewin cannot tolerate to this day. “My daughter Pauline tells me that if I see her wearing wool, I still turn away; such is the effect the war still has on me,” Lewin says in the book.

After the war ended, his father resurfaced; remarkably, Lewin describes having a “more or less normal childhood.” His parents continued running the school, which he says strongly influenced his love of teaching.

After graduating from Delft University of Technology with a degree in nuclear physics, Lewin received an invitation from MIT professor and X-ray astronomy pioneer Bruno Rossi. The Dutch graduate wasted no time, setting foot on the MIT campus in January 1966. Six months later, Lewin accepted a faculty position in the Department of Physics.

At that time, he found himself in the middle of the new and exciting field of X-ray astronomy. He worked night and day, analyzing data from weather balloons and satellites for evidence of distant galaxies. “We were getting amazing data,” Lewin says in the book, “a bit of gold pouring out of the sky every day, 24 hours a day.” For the next four decades, he contributed hundreds of scientific papers and made countless discoveries, identifying new sources of X-rays in the deep cosmos.

In addition to his research, Lewin took on MIT’s three core classes in physics; his wry wit and dramatic demonstrations quickly made him a student favorite. In preparing his lectures, Lewin made maximum use of 26-100, a lecture hall that seats 566 people and features an extensive preparatory room behind the blackboard.

John Belcher, the Class of 1922 Professor of Physics at MIT, remembers the back room as “something out of a 19th-century Frankenstein monster movie.” Belcher says the physics department had packed the room with props, from a giant Faraday cage to Van de Graaff generators that set off lightning sparks, all of which Lewin used in his lectures. On certain occasions, the ambitious lecturer would rocket onstage riding a tricycle propelled by a fire extinguisher — a feat he repeated Monday night for the packed lecture hall.

“I think I was always eccentric,” Lewin said Monday evening, to appreciative laughs. “From day one, my lectures were always different from the mean.”

Hall of the lecture king

Lewin was a hard act to follow, as Belcher quickly discovered: Early in his MIT career, Belcher couldn’t help comparing his own listless reviews with Lewin’s glowing accolades. He started modeling his lectures after the department’s star instructor, and even took up an acting class to learn to engage a large audience.

“The acting class helped me enormously,” Belcher said last week. “We were told to take risks, and sometimes you do outrageous things, and you may fall flat on your face, and other times you may get a wonderful response. But you have to take risks. And Walter was wonderful at this.” 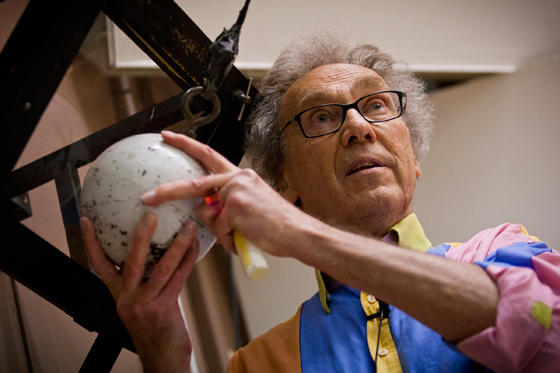 Lewin holds a small wrecking ball against a glass pane to illustrate the height of a pendulum exceeds its initial height only when force is applied. A few moments later, Lewin sent the ball swinging with a small push, shattering the glass.
Photo: Dominick Reuter
Lewin’s demonstrations always carried an element of risk — or at least, perceived risk. To prove a particular law of physics, he would balance precariously atop a 16-foot ladder, or pump himself with 300,000 volts of electricity. He would even put himself directly in the path of a small wrecking ball, which, precisely as calculated, would reverse direction mere millimeters from his chin.

Lewin took great pains in crafting each lecture, choreographing his demonstrations down to the minute (and millimeter). He would often perform three run-throughs — the last one at 5 a.m. on lecture day — to make sure the pacing of the demonstration, from buildup to execution, went smoothly.

“An incredible amount of effort went into his lectures,” said Belcher, who has posted excerpts from Lewin’s lectures, along with related written material, on the OCW Scholar site for 8.02 (Electricity & Magnetism). “This was truly a labor of love.”

Never over the rainbow

For the Love of Physics devotes one chapter entirely to rainbows, a favorite topic for Lewin. In clear and direct prose, Lewin explains the physics behind the phenomenon, encouraging the reader to go “rainbow hunting” with a set of clear instructions:

First of all, trust your instincts about when a rainbow might form. … When you feel one coming on, here’s what you do. First, turn your back to the Sun. Then locate the shadow of your head, and look about 42 degrees in any direction away from the imaginary line. If there’s enough sunlight, and if there are enough raindrops, the collaboration will work and you will see a colorful bow.

Lewin himself is constantly on the lookout for rainbows, and confesses to lingering at fountains on sunny days, positioning himself exactly where he is sure to spot a rainbow. On such occasions, he’s been known to grab a pedestrian or two in an exuberant attempt to share the experience. “I’m sure some of them think I’m weird,” Lewin says in his book. “But as far as I’m concerned, why should I be the only one to enjoy such hidden wonders?”