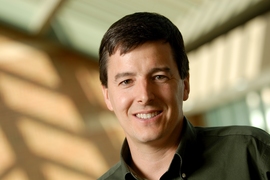 Caption:
Dr. John A. Rogers, winner of the 2011 $500,000 Lemelson-MIT Prize
Credits:
Photo courtesy of the Lemelson-MIT Program
Proving that technological entrepreneurship can have groundbreaking impact when inventive concepts stretch across disparate fields, renowned innovator, materials scientist and applied physicist Dr. John A. Rogers was announced today as the recipient of the 2011 $500,000 Lemelson-MIT Prize. Rogers' research has resulted in the creation of revolutionary products integral to human health, fiber optics, semiconductor manufacturing and solar power, with many currently in commercial use. Rogers will accept the prestigious prize and present his accomplishments to the public at MIT during the Lemelson-MIT Program's fifth-annual EurekaFest, a multi-day celebration of the inventive spirit, taking place June 15-18.

Rogers' interest in science and technology began during childhood, with a physicist father and an accomplished poet mother, both encouraging the importance of thinking imaginatively. His ongoing education and research further propelled this interdisciplinary path, with an approach to invention based on leveraging creative ideas, but pursuing them within the constraints of practical utility. His current work demonstrates expertise as an entrepreneurial innovator, bringing lab work to multi-industry marketplaces. He is co-founder and director of mc10 Inc. and Semprius Inc., among various other companies.

"John Rogers takes the cross-section of scientific and technological development for practical application to a new level; the work is striking in its novelty and marketability," states Michael J. Cima, faculty director of the Lemelson-MIT Program. "His management of a team of young researchers focused on inventive work additionally establishes his ability to thrive as a role model, evidenced in the fact that every student to study in his group has gone on to pursue a creative technical career. This game-changing and inspiring type of inventor defines who we look to honor."