Survey reveals potential innovation gap in the U.S.: Young women possess characteristics of inventors, but do not see themselves as inventive 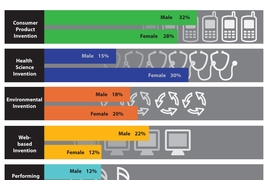 Caption:
The 2011 Lemelson-MIT Invention Index asked young adults aged 16-25 what they would most like to invent.
Credits:
Courtesy of the Lemelson-MIT Program

Caption:
The 2011 Lemelson-MIT Invention Index asked young adults aged 16-25 which countries are leading the way in invention.
Credits:
Courtesy of the Lemelson-MIT Program
Invention and innovation are essential to remaining globally competitive, and a new survey shows an untapped group of potential inventors in the U.S. The 2011 Lemelson-MIT Invention Index, announced today, indicates that American women ages 16-25 possess many characteristics necessary to become inventors, such as creativity, interest in science and math, desire to develop altruistic inventions, and preference for working in groups or with mentors — yet they still do not see themselves as inventive. Young men in the same age group echo these characteristics, highlighting the need to cultivate young adults' interest in science and math, while educating and inspiring them about the impact they can have on others through invention.

The annual Lemelson-MIT Invention Index, which gauges Americans' perceptions about invention and innovation, this year surveyed young men and women ages 16-25. Almost three in four young women (71 percent) indicate they are creative, the characteristic they most associate with inventors (63 percent); however, less than one in three (27 percent) describe themselves as inventive. Men also follow this trend; 66 percent say they are creative but only 39 percent describe themselves as inventive.

Further demonstrating inventive traits, young women show a strong affinity for math and science — two of every five female respondents (42 percent) rate these as their favorite subjects in school. More than half of male respondents (53 percent) agree. 35 percent of young women also say they have a family member working in a field related to science, technology, math or engineering. The results reveal young women's innate interest in inventive fields; however, recent statistics show while more women are entering college and obtaining degrees, less than 10 percent earn them in technical majors such as computer and information sciences, engineering or math. This proportionately small group indicates a need to educate women about translating their skills and academic interests into inventive careers.