The future of chip manufacturing 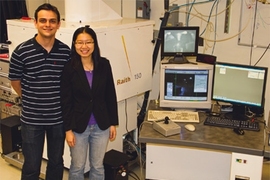 Caption:
Research Laboratory of Electronics graduate students Vitor Manfrinato and Lin Lee Cheong, with the electron-beam lithography system they used in their experiments.
Credits:
Photo: Melanie Gonick
For 50 years, the transistors on computer chips have been getting smaller, and for 50 years, manufacturers have used the same technique — photolithography — to make their chips. But the very wavelength of visible light limits the size of the transistors that photolithography can produce. If chipmakers are to keep shrinking chip features, they’ll probably need to turn to other manufacturing methods.

Researchers have long used a technique called electron-beam (or e-beam) lithography to make prototype chips, but standard e-beam lithography is much slower than photolithography. Increasing its speed generally comes at the expense of resolution: Previously, the smallest chip features that high-speed e-beams could resolve were 25 nanometers across, barely better than the experimental 32-nanometer photolithography systems that several manufacturers have demonstrated. In a forthcoming issue of the journal Microelectronic Engineering, however, researchers at MIT’s Research Laboratory of Electronics (RLE) present a way to get the resolution of high-speed e-beam lithography down to just nine nanometers. Combined with other emerging technologies, it could point the way toward making e-beam lithography practical as a mass-production technique.

The most intuitive way for manufacturers to keep shrinking chip features is to switch to shorter wavelengths of light — what’s known in the industry as extreme ultraviolet. But that’s easier said than done. “Because the wavelength is so small, the optics [are] all different,” says Vitor Manfrinato, an RLE graduate student and first author on the new paper. “So the systems are much more complicated … [and] the light source is very inefficient.”

Visible-light, ultraviolet and e-beam lithography all use the same general approach. The materials that compose a chip are deposited in layers. Every time a new layer is laid down, it’s covered with a material called a resist. Much like a piece of photographic paper, the resist is exposed — to either light or a beam of electrons — in a carefully prescribed pattern. The unexposed resist and the material underneath are then etched away, while the exposed resist protects the material it covers. Repeating this process gradually builds up three-dimensional structures on the chip’s surface.

One way to improve the efficiency of e-beam lithography is to use multiple electron beams at once, but there’s still the problem of how long a beam has to remain trained on each spot on the surface of the resist. That’s the problem the MIT researchers address.

The fewer electrons it takes to expose a spot on the resist, the faster the e-beam can move. But lowering the electron count means lowering the energy of the beam, and low-energy electrons tend to “scatter” more than high-energy electrons as they pass through the resist, spreading farther apart the deeper they go. To reduce scattering, e-beam systems generally use high-energy beams, but that requires resists tailored to larger doses of electrons.

Manfrinato, a member of RLE’s Quantum Nanostructures and Nanofabrication Group, and group leader Karl Berggren, the Emanuel E. Landsman (1958) Associate Professor of Electrical Engineering and Computer Science — together with professor of electrical engineering Henry Smith, graduate students Lin Lee Cheong and Donald Winston, and visiting student Huigao Duan, all of RLE — used two tricks to improve the resolution of high-speed e-beam lithography. The first was to use a thinner resist layer, to minimize electron scattering. The second was to use a solution containing ordinary table salt to “develop” the resist, hardening the regions that received slightly more electrons but not those that received slightly less.

Pieter Kruit, a professor of physics at the Delft University of Technology in the Netherlands and co-founder of Mapper, a company that has built lithographic systems with 110 parallel e-beams, says that in addition to being faster, e-beam systems that deliver smaller doses of electrons are much easier to build. The larger the dose of electrons, the more energy the system consumes, and the more insulation it requires between electrodes. “That takes so much space that it’s impossible to build an instrument,” Kruit says.

Kruit doubts manufacturers will use exactly the resist that the MIT researchers did in their experiments. Although the researchers’ goal was to find a resist that would respond to small doses of electrons, the one that they settled on is actually “a little bit too sensitive,” Kruit says: The amount of electricity that an electrode delivers to a chip surface will vary slightly, he explains, and if the resist is too sensitive to those variations, the width of the chip features will vary, too. “But that is a matter of modifying the resist slightly, and that’s what resist companies do all the time,” he adds.