What can make a dent?

Credits:
Graphic: Christine Daniloff
With the world's energy needs growing rapidly, can zero-carbon energy options be scaled up enough to make a significant difference? How much of a dent can these alternatives make in the world's total energy usage over the next half-century? As the MIT Energy Initiative approaches its fifth anniversary next month, this five-part series takes a broad view of the likely scalable energy candidates.

At any given moment, the world is consuming about 14 terawatts (trillions of watts) of energy — everything from the fuel for our cars and trucks, to wood burned to cook dinner, to coal burned to provide the electricity for our lights, air conditioners and gadgets.

What's a watt?
Watts are a measure of the amount of power used at a given instant, for example a typical light bulb uses 60 watts for as long as it's on. If you leave the bulb on for an hour, it will have used 60 watt-hours, a measure of energy consumption.
To put those 14,000,000,000,000 watts in perspective, an average person working at manual labor eight hours a day can expend energy at a sustained rate of about 100 watts. But the average American consumes energy (in all forms) at a rate of about 600 times that much. "So our lifestyle is equivalent to having 600 servants, in terms of direct energy consumption," says Robert Jaffe, the Otto (1939) and Jane Morningstar Professor of Physics at MIT.

Of that 14 terawatts (TW), about 85 percent comes from fossil fuels. But since world energy use is expected to double by 2050, just maintaining carbon emissions at their present rate would require coming up with about 14 TW of new, non-carbon sources over the next few decades. Reducing emissions — which many climate scientists consider essential to averting catastrophic changes — would require even more.

According to Ernest J. Moniz, the Cecil and Ida Green Distinguished Professor of Physics and Engineering Systems and director of the MIT Energy Initiative, a widely cited 2004 paper in Science introduced the concept of "wedges" that might contribute to carbon-emissions reduction. The term refers to a graph projecting energy use between now and 2050: Wedges are energy-use reductions that could slice away at the triangle between a steadily rising line on this graph — representing a scenario in which no measures are taken to curb energy use — and a horizontal line reflecting a continuation of present levels of energy usage, without increases. 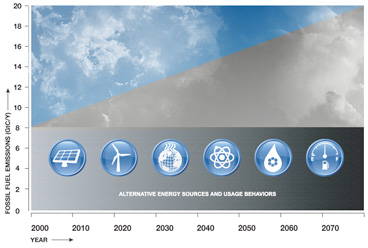 INFOGRAPHIC: 'Wedges' to reduce emissions
The authors of the 2004 Science paper proposed a series of wedges, each representing about two terawatts of energy savings. (Others have since refined this model, now referring to anything that can save at least one terawatt as a wedge).

Of course, even eliminating the triangle altogether by holding energy usage at current levels would not reduce the greenhouse gas emissions that have been steadily heating up the planet; it would simply stabilize emissions at present levels, slowing the rate of further growth. But most analyses, such as those by MIT's Joint Program on the Science and Policy of Global Change, indicate that merely stabilizing emissions still presents a better-than-even chance of triggering a rise in global temperatures of at least 2.3 degrees Celsius by 2100, an amount that could lead to devastating changes in sea level, as well as increased patterns of both flooding and droughts. Preventing such serious consequences, most analysts say, would require not just stabilizing emissions but drastically curtailing them — in other words, finding additional wedges to implement.

In the Science paper, authors Stephen Pacala and Robert Socolow of Princeton University listed 15 possible wedges: energy-saving technologies to chip away at the triangle. (The paper was recently updated by Socolow, in the Bulletin of the Atomic Scientists, to reflect the years that have passed since the initial publication and the lack of any net reductions so far). While there are indeed technologies that can contribute to reductions on the order of terawatts, Moniz says Pacala and Socolow's analysis is "not necessarily very realistic," and "they made it sound like implementing one of these wedges is too easy." In fact, every one of the options has its own difficulties, Moniz says.

But some aspects of bringing about such a drastic reduction are not controversial. "The number one thing is demand reduction, that's clear," Moniz says. "Most [scientists] think you need to get more than one wedge" from demand reduction — another way of saying increased efficiency — "because if you don't, then we'd need a miracle" to achieve the needed reductions in emissions through other means, he says.

In fact, efficiency gains may yield several wedges, corresponding to multiple terawatts saved. That's not so surprising when you consider that of all the energy consumed in the United States from all sources, some 58 percent is simply lost — that is, not actually used to do anything useful — says Jaffe, who co-teaches an MIT class called "The Physics of Energy." For example, the typical automobile wastes more than two-thirds of the energy contained in the gasoline it burns, dumping it into the environment as heat.

"U.S. transportation, on average, is about 20 percent efficient," Jaffe says. "That's scandalous. There are tremendous savings to be gained," he says, such as by continuing to raise the requirements for fuel efficiency of vehicles.

But after picking the relatively low-hanging fruit of efficiency, potential solutions for reducing emissions become more complex and less potent. Most of the technologies that are widely discussed as low- or zero-carbon alternatives are limited in their potential impact, at least within the next few decades.

For example, many people talk about a "nuclear renaissance" that could provide electricity with very little greenhouse gas impact. But to get even one terawatt of power from new nuclear plants "ain't so simple," Moniz says. The operating costs of new nuclear-plant designs, for example, will have to be proven through years of operating experience before financial markets will be willing to fund such systems on a large scale.

Over the longer run, such technologies may be crucial to meeting the world's growing energy demands. By the end of this century, global energy needs could be more than triple those of today, says Ron Prinn, the TEPCO Professor of Atmospheric Science and co-director of MIT's Joint Program on the Science and Policy of Global Change. "Most of that will be driven by the industrialization of China, India and Indonesia," he explains, as these countries evolve from agrarian to industrialized societies.

Ultimately, Moniz suggests, a non-carbon energy future will likely consist largely of some combination of nuclear power, renewable energy sources and carbon-capture systems that allow fossil fuels to be used with little or no emissions of greenhouse gases. Which of these will dominate in a given area comes down to costs and local conditions.

"No one technology is going to get us into a sustainable energy future," Jaffe says. Rather, he says, it's going to take a carefully considered combination of many different approaches, technologies and policies.