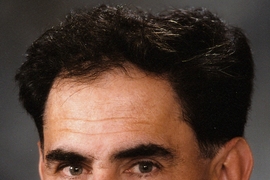 ↓ Download Image
Caption: MIT Professor Edward F. Crawley ’76, SM 78, ScD ’80 has been named the recipient of the $500,000 Bernard M. Gordon Prize for Innovation in Engineering and Technology Education.
Credits: Photo courtesy of the Department of Aeronautics and Astronautics

NAE is citing Crawley for his creation of the Conceive, Design, Implement, Operate (CDIO) educational initiative at MIT in 2000. CDIO, developed with input from faculty, industry, educators and MIT alumni, is an innovative educational protocol for producing the next generation of engineers. The framework provides students with an education stressing engineering fundamentals in the context of real-world systems and products.

CDIO has received praise from the worlds of industry and business for helping to develop graduates who not only have a deep working knowledge of the fundamentals, but who also can lead in the creation and operation of new products, processes and systems, and who understand the importance and strategic value of research and technological development on society. Under Crawley’s leadership, the CDIO Initiative has become a global movement involving departments of mechanical, electrical, transportation, biomedical, and chemical engineering as well as aerospace engineering. More than 50 universities in 25 countries have adopted CDIO for their programs. Within the next several years, more than 10,000 engineering students will have graduated from, or be actively participating in, a CDIO education, under the tutelage of more than 600 faculty at collaborating schools.

AeroAstro department head Ian A. Waitz said, “Ed is a star at all levels — as an educator, as an innovator of new department and school programs, and as someone who is advancing the scholarship and practice of engineering education internationally. We in AeroAstro are immensely proud of Ed for receiving this well-deserved recognition.”

NAE member Edward Greitzer, the AeroAstro H.N. Slater Professor of Aeronautics and Astronautics and former AeroAstro associate head, said, “Ed Crawley has a remarkable record of innovations in engineering education. His development and leadership of the CDIO Initiative, and his deep commitment to its principles, has had major impact in universities throughout the world.”

The NAE’s Gordon Prize recognizes new educational procedures and experiments that develop effective engineering leaders. The focus is on innovations such as curricular design, teaching methods, and technology-enabled learning that strengthen students’ capabilities and desire to grow into leadership roles.

Crawley is the Ford Professor of Engineering at MIT, and is a professor of aeronautics and astronautics and of engineering systems. He has been the AeroAstro head, the Cambridge-MIT Institute executive director, an adviser to the NAE Committee on the Space Station, and a member of the Presidential Advisory Committee on the Space Station Redesign. He also directs the Bernard M. Gordon-MIT Engineering Leadership Program, which aims to create new approaches to prepare students for engineering leadership.

As the Gordon Prize winner, Crawley will receive $250,000 at a Washington black-tie event in February. An additional $250,000 will be granted to MIT to support CDIO’s continued development, refinement, and dissemination.

The prize is named after Bernard M. Gordon ’48, SM ’49, considered the “father of analog to digital conversion” for his inventions and contributions to signal translation, medical tomography and other high-precision instrumentation. Gordon has more than 200 patents worldwide.