How dense is a cell? 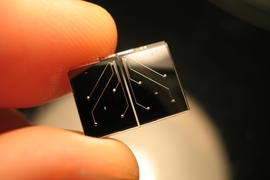 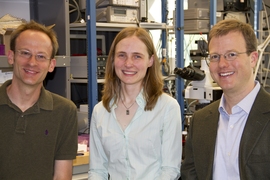 ↓ Download Image
Caption: From left to right, William Grover, Andrea Kristine Bryan and Scott Manalis in their lab. The team developed a way to measure the density of a single cell.
Credits: Photo: Melanie Gonick

Caption:
MIT researchers designed this tiny microfluidic chip that can measure the mass and density of single cells.
Credits:
Photo courtesy of the Manalis Lab
More than 2,000 years after Archimedes found a way to determine the density of a king’s crown by measuring its mass in two different fluids, MIT scientists have used the same principle to solve an equally vexing puzzle — how to measure the density of a single cell.

“Density is such a fundamental, basic property of everything,” says William Grover, a research associate in MIT’s Department of Biological Engineering. “Every cell in your body has a density, and if you can measure it accurately enough, it opens a whole new window on the biology of that cell.”

The new method, described in the Proceedings of the National Academy of Sciences the week of June 20, involves measuring the buoyant mass of each cell in two fluids of different densities. Just as measuring the crown’s density helped Archimedes determine whether it was made of pure gold, measuring cell density could allow researchers to gain biophysical insight into fundamental cellular processes such as adaptations for survival, and might also be useful for identifying diseased cells, according to the authors.

Grover and recent MIT PhD recipient Andrea Bryan are lead authors of the paper. Both work in the lab of Scott Manalis, a professor of biological engineering, member of the David H. Koch Institute for Integrative Cancer Research and senior author of the paper.

Measuring the density of living cells is tricky because it requires a tool that can weigh cells in their native fluid environment, to keep them alive, and a method to measure each cell in two different fluids.


How the lab can determine the weight and density of individual cells
Video: Manalis lab

In 2007, Manalis and his students developed the first technique to measure the buoyant mass of single living cells. Their device, known as a suspended microchannel resonator, pumps cells, in fluid, through a microchannel that runs across a tiny silicon cantilever, or diving-board structure. That cantilever vibrates within a vacuum; when a cell flows through the channel, the frequency of the cantilever’s vibration changes. The cell’s buoyant mass can be calculated from the change in frequency.

To adapt the system to measure density, the researchers needed to flow each cell through the channel twice, each time in a different fluid. A cell’s buoyant mass (its mass as it floats in fluid) depends on its absolute mass and volume, so by measuring two different buoyant masses for a cell, its mass, volume and density can be calculated.

The new device rapidly exchanges the fluids in the channel without harming the cell, and the entire measurement process for one cell takes as little as five seconds.

David Weitz, professor of physics at Harvard University, says the new technique is a clever way of measuring cell density, and opens up many new avenues of research. “The very interesting thing they show is that density seems to have a more sensitive change than some of the more standard measurements. Why is that? I don’t know. But the fact that I don’t know means it’s interesting,” he says.

The researchers tested their system with several types of cells, including red blood cells and leukemia cells. In the leukemia study, the researchers treated the cells with an antibiotic called staurosporine, then measured their density less than an hour later. Even in that short time, a change in density was already apparent. (The cells grew denser as they started to die.) The treated leukemia cells increased their density by only about 1 percent, a change that would be difficult to detect without a highly sensitive device such as this one. Because of that rapid response and sensitivity, this method could become a good way to screen potential cancer drugs.

“It was really easy, by the density measurement, to identify cells that had responded to the drug. If we had looked at mass alone, or volume alone, we never would have seen that effect,” Bryan says.

The researchers also demonstrated that malaria-infected red blood cells lose density as their infection progresses. This density loss was already known, but this is the first time it has been observed in single cells.

Being able to detect changes in red-blood-cell density could also offer a new way to test athletes who try to cheat by “doping” their blood — that is, by removing their own blood and storing it until just before their competition, when it is transfused back into the bloodstream. This boosts the number of red blood cells, potentially enhancing athletic performance.

Storing blood can alter the blood’s physical characteristics, and if those include changes in density, this technique may be able to detect blood doping, Grover says.

Researchers in Manalis’ lab are now investigating the densities of other types of cells, and are starting to work on measuring single cells as they grow over time — specifically cancer cells, which are characterized by uncontrolled growth.

“Understanding how density of individual cancer cells relates to malignant progression could provide fundamental insights into the underlying cellular processes, as well as lead to clinical strategies for treating patients in situations where molecular markers don’t yet exist or are difficult to measure due to limited sample volumes,” Manalis says.

Other authors on the paper are MIT research scientist Monica Diez-Silva; Subra Suresh, former dean of the MIT School of Engineering; and John Higgins of Massachusetts General Hospital and Harvard Medical School.