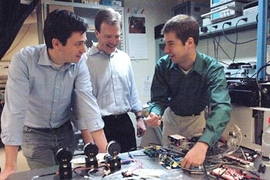 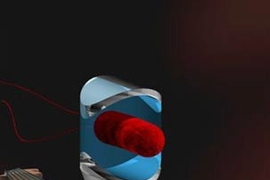 ↓ Download Image
Caption: This illustration shows an artistic depiction of the concept that enables measuring the mass of a single bacterium and single nanoparticles in fluid with a very high resolution. A hollow resonator, represented by a hollow, fluid-filled guitar string, vibrates while small particles, represented here by a red bacterium, flow through it. As the particles flow through the resonator, they change the frequency (tone) of the vibration.
Credits: Image courtesy / Thomas Burg 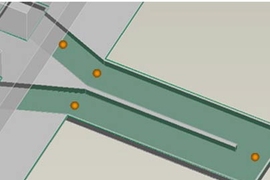 ↓ Download Image
Caption: MIT researchers have developed a tiny chip that can be used to weigh single cells or particles. As particles flow through the device, the frequency of vibration of the cantilever (green) is slightly altered, allowing the mass of the particles to be calculated.
Credits: Image courtesy / Scott Manalis

Caption:
This illustration shows an artistic depiction of the concept that enables measuring the mass of a single bacterium and single nanoparticles in fluid with a very high resolution. A hollow resonator, represented by a hollow, fluid-filled guitar string, vibrates while small particles, represented here by a red bacterium, flow through it. As the particles flow through the resonator, they change the frequency (tone) of the vibration.
Credits:
Image courtesy / Thomas Burg

Caption:
MIT researchers have developed a tiny chip that can be used to weigh single cells or particles. As particles flow through the device, the frequency of vibration of the cantilever (green) is slightly altered, allowing the mass of the particles to be calculated.
Credits:
Image courtesy / Scott Manalis

For the first time, MIT researchers have found a way to measure the mass of single cells with high accuracy.

The new technique, which is based on a micromechanical detector, could allow researchers to develop inexpensive, portable diagnostic devices and might also offer a unique glimpse into how cells change as they undergo cell division.

Unlike conventional methods, the MIT technique allows cells to remain in fluid while they are being measured, opening up a new realm of possible applications, says Scott Manalis, senior author of a paper on the work that will appear in the April 26 issue of Nature.

In addition to weighing cells, the technology can be used to "weigh nanoparticles or sub-monolayers of biomolecules with a resolution in solution that is six orders of magnitude more sensitive than commercial mass sensor methods. One direction we're pursuing is mass-based flow cytometry, a way to weigh and count specific cells," said Manalis, an associate professor in MIT's Departments of Biological Engineering and Mechanical Engineering.

Current mass-measurement methods achieve a resolution down to a zeptogram (10-21 grams) but only work with non-living things because the procedure must be performed inside a vacuum. So, the MIT researchers decided to turn the conventional system inside out.

In the traditional method, the molecules to be weighed are placed on top of a tiny slab, or cantilever, made of silicon. The slab vibrates at its resonant frequency (the frequency at which the material naturally tends to vibrate) inside a vacuum. When a molecule sits on the slab, the frequency changes slightly, and the mass of the molecule can be calculated by measuring that change.

This measurement must be performed in a vacuum to prevent air (or fluid) from interfering with the frequency of oscillation. However, cells cannot survive in a vacuum, so they must be measured in fluid, which diminishes the accuracy of the measurement.

The researchers solved this dilemma by placing the fluid containing the sample inside the silicon slab, which still oscillates within a vacuum surrounding it. The biological sample is pumped through a microchannel that runs across the slab, without impairing its ability to vibrate.

"The resonator is sealed in a tiny vacuum cavity inside the chip, so there is virtually no resistance to the vibration," said co-lead author Thomas Burg, a research associate in biological engineering. "This lets us measure a mass change, say 10 parts in a billion, of the already very light microcantilever."

So far, the researchers have weighed particles with a resolution down to slightly below a femtogram (10-15 grams), but Manalis believes that with refinements, the sensitivity could potentially be lowered by several orders of magnitude within a few years. "Every step along the way will open up new possibilities," he said.

The researchers can also measure the mass density of particles or cells "by varying the density of the surrounding solution," said Michel Godin, co-lead author and postdoctoral associate in biological engineering.

The research team is already looking into several applications for the new technique.

One area of great promise is creating a device that would mimic the cell-counting capabilities of flow cytometers, which are often used to monitor CD4 cell numbers in AIDS patients. By counting CD4 cells, a type of immune cell, doctors can tell how far a patient's AIDS has progressed. However, flow cytometry devices, which work by bouncing light off a flowing stream of cells, are too large and expensive to be useful in developing countries where many AIDS patients live.

A tiny chip that could count cells using the new MIT weighing method would be a "cheap and robust" alternative to commercially available flow cytometers, which typically cost more than $20,000, Manalis said.

"Since the device is batch-fabricated by conventional semiconductor processing techniques, it could potentially be used in a disposable format," he said.

William Rodriguez, an AIDS researcher at Massachusetts General Hospital who is familiar with Manalis' research, said the new technology could have a tremendous impact on AIDS testing in rural areas of Africa and elsewhere.

"Simply put, a cheap, simple CD4 counting device that can be used by a community health worker â€¦ would be a breakthrough advance in global health," according to Rodriguez.

Manalis is also planning a collaboration with MIT associate professor of biology Angelika Amon, who is interested in studying how the mass density of a single cell changes as it goes through cell division. Using the new method, scientists can ultimately trap a single cell and observe it over a long period of time. Changes in mass could correlate to production of proteins, offering a new way to study what the cell does during division, Manalis said.

The research was funded by the National Institutes of Health Cell Decision Process Center, the Institute for Collaborative Biotechnologies from the U.S. Army Research Office, the Air Force Office of Sponsored Research, the National Science Foundation and the Natural Sciences and Engineering Research Council of Canada.

A version of this article appeared in MIT Tech Talk on May 2, 2007 (download PDF).