Carbon capture? Go for the source 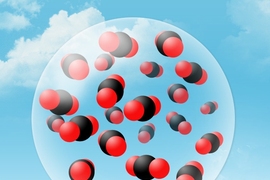 Credits:
Graphic: Christine Daniloff
Since most of the world’s governments have not yet enacted regulations to curb emissions of greenhouse gases, some experts have advocated the development of technologies to remove carbon dioxide directly from the air. But a new MIT study shows that, at least for the foreseeable future, such proposals are not realistic because their costs would vastly exceed those of blocking emissions right at the source, such as at the powerplants that burn fossil fuels.

Some purveyors of various new technologies for scrubbing carbon dioxide out of the air are reminiscent of  “snake-oil salesmen,” says Howard Herzog, a senior research engineer at the MIT Energy Initiative and co-author of the new analysis published this week in the Proceedings of the National Academy of Sciences. The study was co-authored by MIT civil and environmental engineering postdoc Kurt Zenz House, along with researchers at C12 Energy in Berkeley, Calif., and at Stanford University.

Herzog and his co-authors are not alone in criticizing these proposals. An analysis earlier this year by the American Physical Society came to similar conclusions, although Herzog, a peer reviewer of that study, says that report “didn’t go far enough” in its criticism of air-capture systems. In that analysis, the best open-air carbon-capture systems proposed were found to cost at least eight times as much, per ton of carbon avoided, as those installed at the powerplant.

It’s not surprising that those promoting these concepts find an eager audience, Herzog says. “It’s so enticing — you don’t have to change anything about your lifestyle” to reduce greenhouse gases and slow the global climate change that virtually all the world’s climate scientists agree is underway. “It’d be such a great solution — if it were real.”

Unfortunately, when examined closely, it turns out that “many of those advocating air-capture deployment and research are really lowballing the cost,” Herzog says. When the underlying chemistry and mechanics are analyzed, their numbers don’t hold up, he says. Compared with removing carbon dioxide from the emissions at a powerplant — technology that exists and can be measured — removing it from the outside air means processing about 300 times more air per ton of CO2 removed, because that’s the difference in CO2 concentration.

Numerous studies have shown that the cost of removing one substance from a mixture depends on its initial concentration, so the much lower concentration of CO2 in outside air makes its removal from air much more costly than from exhaust gases. After a detailed comparison, the MIT-led team concluded that the cost of such removal is likely to be more than $1,000 per ton of CO2 avoided, compared to $50 to $100 per ton for current powerplant scrubbers.

Jennifer Wilcox, Assistant Professor of Energy Resources Engineering at Stanford University and a co-author of the study, says, “direct air capture sounds great in theory. In reality, though, using fossil-based energy sources to capture and regenerate the CO2 would result in net-positive CO2 emissions.”

“If you look at the ideal equations,” Herzog says, it’s possible to come up with air-scrubbing systems that appear feasible, “but if you look at empirical data — how engineers look at this, with real-world efficiencies — you don’t find many reasons” to be hopeful. The burden is on the inventors to show that their proposed systems really could work, he says: “It can be done, that’s not the question. The question is what is the cost.”

Some of the air-capture proposals are based on small-scale laboratory experiments, but don’t address key questions of how they would process the huge volumes of air required. “They don’t have answers, yet they give cost estimates,” Herzog says. “It’s irresponsible of them to give cost estimates and hold out hope that this could be a good alternative to addressing climate change.”

While the study found that such technologies are unlikely to have a place over the next few decades, it did see one possible area where a particular variation of such systems might make sense, at least to a limited extent: planting trees or other plants to extract carbon dioxide from air, then burning them to produce electricity while scrubbing the carbon dioxide at that powerplant. That type of process would take advantage of plants’ natural ability to carry out the initial extraction from the air, and would be renewable because the plants could be harvested and then replaced. The total cost of such a system could be a few hundred dollars per ton of carbon removed — which is not competitive at today’s prices, but might be in the future.

Even then, it would be more expensive than cleaning up fossil-fuel emissions right at the powerplants, Herzog says: “What makes us think, if we’re not willing to do these cheaper alternatives today, that future generations will do these much more expensive things?”

Gary Rochelle, a professor of chemical engineering at the University of Texas at Austin, who was not involved in this study, says he agrees with the conclusion that “air-capture technology is economically infeasible, especially compared to near- and intermediate-term technologies for climate-change mitigation.” He adds that the new research “provides a good argument to support the position that research on air-capture technology is a distraction from pursuing post-combustion technology and other important technologies for climate-change mitigation.”