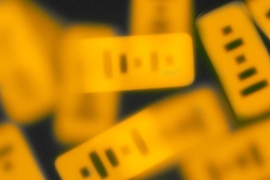 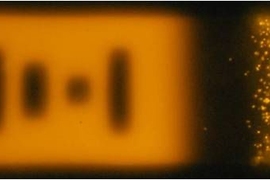 ↓ Download Image
Caption: In this image, the microRNA fluoresces after binding to the particle. At left, a 'bar code' indicates which type of microRNA the particle is detecting.
Credits: Image: Stephen Clifford Chapin

Caption:
In this image, the microRNA fluoresces after binding to the particle. At left, a 'bar code' indicates which type of microRNA the particle is detecting.
Credits:
Image: Stephen Clifford Chapin

About 10 years ago, scientists discovered a new type of genetic material called microRNA, which appears to turn genes on or off inside a cell. More recently, they found that these genetic snippets often go haywire in cancer cells, contributing to tumors’ uncontrollable growth.

A team of researchers at MIT has now engineered a way to detect abnormal microRNA levels in the blood of cancer patients, raising the possibility of developing a simple blood test to diagnose or monitor the disease.

The technology, described in two recent papers in the journals Analytical Chemistry and Angewandte Chemie, consists of an array of tiny particles, each designed to latch onto a specific type of microRNA. By exposing blood samples or purified RNA to these particles, the researchers can generate a microRNA profile that reveals whether cancer is present. Each type of cancer — lung, pancreas, and so forth — has its own microRNA signature.

MicroRNAs, which are usually only about 20 nucleotides long, have been implicated in many other diseases, including HIV, Alzheimer’s disease, diabetes and cardiovascular disease. The human genome contains about 1,000 microRNAs, believed to fine-tune gene expression by blocking the messenger-RNA molecules that carry DNA’s protein-building instructions.

While measuring microRNA levels has clear potential benefits, there are many challenges to detecting microRNA, says Patrick Doyle, a professor of chemical engineering at MIT and leader of the research team. “There’s not an accepted gold standard,” Doyle says. “Everybody has their own favorite one.”

Most current microRNA-detection techniques require RNA to be isolated from a blood or tissue sample and purified — a time-consuming process. Detecting microRNA directly from a blood sample would be much more efficient, Doyle says.

In their Angewandte Chemie paper, published in January, Doyle, graduate student Stephen Chapin and their colleagues showed that they could use tiny hydrogel particles, about 200 micrometers in length, to rapidly detect microRNA dysregulation patterns in RNA taken from four individuals with four different types of cancer. In their Analytical Chemistry paper, which went online this month, their particles successfully detected microRNA in the blood serum of a prostate cancer patient.

Hydrogels are made of networks of water-loving polymer chains, which are conducive to the attachment of nucleic acids. Each of the researchers’ particles is decorated with millions of identical strands of DNA that are complementary to a specific microRNA target sequence.

When the particles are mixed with a blood sample, any microRNA present binds to its complementary DNA. Each DNA strand also contains a short sequence that binds to a fluorescent probe, added later. Using a custom-built microfluidic scanner, the researchers then rapidly measure each particle’s fluorescence, revealing how much microRNA is present. The scanner also reads a chemical “barcode” imprinted on each particle, which reveals the type of microRNA being detected. The entire process takes less than three hours.

In their second paper, the researchers bumped up their particles’ sensitivity by amplifying the fluorescence generated by each particle. They achieved this by attaching multiple DNA label sequences to each microRNA target captured on the gel microparticles. These label sequences could then be attached to fluorescent probes.

This approach is 100 times more sensitive than other particle technologies for detecting microRNA, according to Doyle. The technology can detect as few as 10,000 copies of a particular microRNA, and each serum assay requires only 25 microliters of sample.

Jun Lu, an assistant professor of genetics at the Yale School of Medicine, says that level of sensitivity makes the particle system “a very promising technology.”

“The reported sensitivity can detect low levels of microRNAs present in serum, and likely other body fluids. This can make the technology very useful, considering that serum and several other body fluids require minimal invasive operations on patients,” says Lu, who was not involved in this research.

The new MIT approach also gives more accurate results than existing techniques that directly label microRNA strands with a fluorescent probe. Different microRNA sequences can take on different shapes, which affects how easily they bind to the fluorescent probe.

Doyle is now starting to work with medical researchers to investigate using microRNA detection to study other diseases such as cardiovascular disease and HIV. He and one of his former graduate students, Daniel Pregibon, have started a company, Firefly Bioworks, which has licensed the technology to build and scan the particles, with plans to develop the system for commercial use.