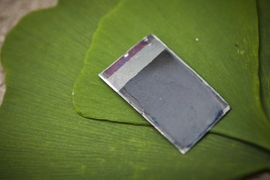 ↓ Download Image
Caption: The 'artificial leaf,' a device that can harness sunlight to split water into hydrogen and oxygen without needing any external connections, is seen with some real leaves, which also convert the energy of sunlight directly into storable chemical form.
Credits: Photo: Dominick Reuter 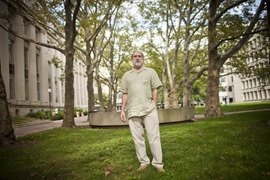 Caption:
The 'artificial leaf,' a device that can harness sunlight to split water into hydrogen and oxygen without needing any external connections, is seen with some real leaves, which also convert the energy of sunlight directly into storable chemical form.
Credits:
Photo: Dominick Reuter

Caption:
Daniel Nocera, the Henry Dreyfus Professor of Energy and Professor of Chemistry at MIT.
Credits:
Photo: Dominick Reuter
Researchers led by MIT professor Daniel Nocera have produced something they’re calling an “artificial leaf”: Like living leaves, the device can turn the energy of sunlight directly into a chemical fuel that can be stored and used later as an energy source.

The artificial leaf — a silicon solar cell with different catalytic materials bonded onto its two sides — needs no external wires or control circuits to operate. Simply placed in a container of water and exposed to sunlight, it quickly begins to generate streams of bubbles: oxygen bubbles from one side and hydrogen bubbles from the other. If placed in a container that has a barrier to separate the two sides, the two streams of bubbles can be collected and stored, and used later to deliver power: for example, by feeding them into a fuel cell that combines them once again into water while delivering an electric current.

The creation of the device is described in a paper published Sept. 30 in the journal Science. Nocera, the Henry Dreyfus Professor of Energy and professor of chemistry at MIT, is the senior author; the paper was co-authored by his former student Steven Reece PhD ’07 (who now works at Sun Catalytix, a company started by Nocera to commercialize his solar-energy inventions), along with five other researchers from Sun Catalytix and MIT.

The device, Nocera explains, is made entirely of earth-abundant, inexpensive materials — mostly silicon, cobalt and nickel — and works in ordinary water. Other attempts to produce devices that could use sunlight to split water have relied on corrosive solutions or on relatively rare and expensive materials such as platinum.

The artificial leaf is a thin sheet of semiconducting silicon — the material most solar cells are made of — which turns the energy of sunlight into a flow of wireless electricity within the sheet. Bound onto the silicon is a layer of a cobalt-based catalyst, which releases oxygen, a material whose potential for generating fuel from sunlight was discovered by Nocera and his co-authors in 2008. The other side of the silicon sheet is coated with a layer of a nickel-molybdenum-zinc alloy, which releases hydrogen from the water molecules.

An 'artificial leaf' made by Daniel Nocera and his team, using a silicon solar cell with novel catalyst materials bonded to its two sides, is shown in a container of water with light (simulating sunlight) shining on it. The light generates a flow of electricity that causes the water molecules, with the help of the catalysts, to split into oxygen and hydrogen, which bubble up from the two surfaces.
Video courtesy of the Nocera Lab/Sun Catalytix


“I think there’s going to be real opportunities for this idea,” Nocera says. “You can’t get more portable — you don’t need wires, it’s lightweight,” and it doesn’t require much in the way of additional equipment, other than a way of catching and storing the gases that bubble off. “You just drop it in a glass of water, and it starts splitting it,” he says.

Now that the “leaf” has been demonstrated, Nocera suggests one possible further development: tiny particles made of these materials that can split water molecules when placed in sunlight — making them more like photosynthetic algae than leaves. The advantage of that, he says, is that the small particles would have much more surface area exposed to sunlight and the water, allowing them to harness the sun’s energy more efficiently. (On the other hand, engineering a system to separate and collect the two gases would be more complicated in such a setup.)

The new device is not yet ready for commercial production, since systems to collect, store and use the gases remain to be developed. “It’s a step,” Nocera says. “It’s heading in the right direction.”

Ultimately, he sees a future in which individual homes could be equipped with solar-collection systems based on this principle: Panels on the roof could use sunlight to produce hydrogen and oxygen that would be stored in tanks, and then fed to a fuel cell whenever electricity is needed. Such systems, Nocera hopes, could be made simple and inexpensive enough so that they could be widely adopted throughout the world, including many areas that do not presently have access to reliable sources of electricity.

Professor James Barber, a biochemist from Imperial College London who was not involved in this research, says Nocera’s 2008 finding of the cobalt-based catalyst was a “major discovery,” and these latest findings “are equally as important, since now the water-splitting reaction is powered entirely by visible light using tightly coupled systems comparable with that used in natural photosynthesis. This is a major achievement, which is one more step toward developing cheap and robust technology to harvest solar energy as chemical fuel.”

Barber cautions that “there will be much work required to optimize the system, particularly in relation to the basic problem of efficiently using protons generated from the water-splitting reaction for hydrogen production.” But, he says, “there is no doubt that their achievement is a major breakthrough which will have a significant impact on the work of others dedicated to constructing light-driven catalytic systems to produce hydrogen and other solar fuels from water. This technology will advance side by side with new initiatives to improve and lower the cost of photovoltaics.”

Nocera’s ongoing research with the artificial leaf is directed toward “driving costs lower and lower,” he says, and looking at ways of improving the system’s efficiency. At present, the leaf can redirect about 2.5 percent of the energy of sunlight into hydrogen production in its wireless form; a variation using wires to connect the catalysts to the solar cell rather than bonding them together has attained 4.7 percent efficiency. (Typical commercial solar cells today have efficiencies of more than 10 percent). One question Nocera and his colleagues will be addressing is which of these configurations will be more efficient and cost-effective in the long run.

Another line of research is to explore the use of photovoltaic (solar cell) materials other than silicon — such as iron oxide, which might be even cheaper to produce. “It’s all about providing options for how you go about this,” Nocera says.