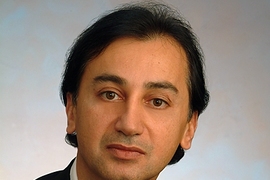 Caption:
Fariborz Maseeh ScD ’90
A Massachusetts Institute of Technology alumnus and his foundation have given the Institute $24 million to expand access to MIT’s world-class education.

The gift from Fariborz Maseeh and the Massiah Foundation will allow MIT to expand the undergraduate student body to 4,500 students, an increase of about 250 from today’s enrollment and consistent with its enrollment in the early- and mid-1990s.

In recognition of this transformational investment, the dormitory formerly known as both W1 and Ashdown House, located near the heart of campus at the intersection of Massachusetts Avenue and Memorial Drive, will be renamed Fariborz Maseeh Hall. The building is currently undergoing extensive renovations.

“Our world and especially our nation need more MIT graduates,” said Maseeh, who received the ScD degree in civil engineering from MIT in 1990. “We are losing the opportunity to train many qualified and bright minds due to MIT’s undergraduate capacity constraints.  I am honored to have a role in increasing the number of MIT graduates. The economic multiplier on this investment is very high.”

MIT President Susan Hockfield underscored the significance of this gift. “Wherever I travel, I hear the same message: that the world needs more of what MIT graduates have to offer,” she said. “Thanks to Fariborz Maseeh’s foresight and generosity, we can open our doors to more superb students — increasing our capacity to tackle the world’s most urgent problems.”

This gift has taken the Campaign for Students, publicly launched in October 2008, over its initial goal of $500 million in support of scholarships, fellowships and infrastructure support that directly affects student life and learning. Fundraising for the campaign’s priorities is ongoing and will continue through the academic year.

Maseeh Hall, which will open in September 2011, will accommodate 460 students and will form an important new center of student life at the Institute. The renovation of this historic building — which opened as a grand hotel on the Charles River in 1901 — will add another undergraduate living and learning community to MIT’s residential options. The renovated facility will include the new Howard Dining Hall, which will be designed to encourage informal interactions and to support a full meal plan for residents and dining for other members of the larger MIT community. It will create a new gathering place near the geographic center of the campus.

Maseeh Hall will include apartments for the housemasters and associate housemaster, graduate resident tutors and residential scholars, as well as meeting spaces and study and practice rooms. Landscaping enhancements in the courtyard will add outdoor activity space. Residential life programs, an important part of MIT’s commitment to foster learning across the student experience, will guide and support student learning, growth and development in the living community.

“Maseeh Hall will provide a wonderfully comprehensive facility to support undergraduate student life. A founding group of students, the Phoenix Group, and its Housemasters, Professor Suzanne Flynn and her husband, Jack Carroll, have been developing the community model for the dormitory. This will ensure that the Hall develops its own traditions and is smoothly integrated into campus life,” said Chancellor Phillip L. Clay, who also noted that “this gift is transformational for the campus in that it creates another residential and architectural jewel at one of the most important campus gateways.”

Enrollment will increase over three years, starting with approximately 80 additional students in the next admitted class, in the fall of 2011. The offices of the Dean for Undergraduate Education Daniel Hastings and the Dean for Student Life Costantino Colombo are planning for this transition with the Academic Departments and Residential Life. “By providing proper planning and support, we anticipate a gradual and seamless return to former undergraduate enrollments,” said MIT Provost L. Rafael Reif.  “We will allocate additional resources to accommodate the added students.”

Fariborz Maseeh was born in Tehran, Iran, and arrived in America at the age of 18.  He attended Portland State University, where he earned his bachelor of science degree in Engineering with honors and a master’s degree in Applied Mathematics. Maseeh went on to earn a master of science degree in Engineering from the University of Texas at Austin, and a doctor of science degree in Civil Engineering from the Massachusetts Institute of Technology. After receiving his doctorate and working for a year at a technology start-up in Silicon Valley, he founded IntelliSense in 1991. Under his leadership, IntelliSense successfully created the first custom design, development and manufacturing MEMS (microelectromechanical systems) operation and became one of the world's fastest-growing MEMS companies. Maseeh now lives in Newport Beach, CA where he manages an investment firm, Picoco LLC, and his philanthropic company, the Massiah Foundation.

About The Massiah Foundation

The Massiah Foundation makes innovative, transformational or charitable contributions in areas within its expertise that can result in broad public benefit mainly in education, health, or arts/culture. The Massiah Foundation has had a long-standing relationship with MIT, including support for the Terrascope program, teaching awards, various scholarships, an endowed chair and continued support of the Saturday Engineering Enrichment and Discovery (SEED) Academy. For more information, visit www.massiah.com.