In the World: Turning waste into profit 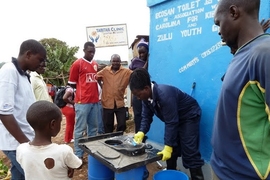 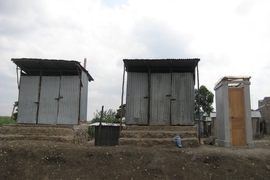 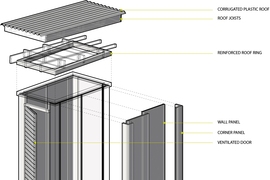 Caption:
The Sanergy toilet, far right, next to existing toilets at Bridge International Academy school in the Lunga Lunga slum of Nairobi.
Credits:
Photo: Ani Vallabhaneni
About 2.6 billion people lack access to adequate sanitation, including more than 10 million in Kenya’s densely populated urban slums. Given the lack of critical infrastructure, slum dwellers go to the bathroom in holes in the ground surrounded by primitive sheds that are shared by up to 150 people. These “pit latrines” are typically constructed with foreign aid, but funding to maintain them is lacking, and so they often fall into disrepair. As a result, many people resort to open defecation, which contaminates drinking water.

What is needed to tackle this sanitation crisis is a new model that addresses the entire sanitation value chain — the processes involved in producing a good or providing a service — and that doesn’t rely on donor funding, according to two second-year students at the MIT Sloan School of Management. David Auerbach and Ani Vallabhaneni have developed such a model as co-founders of Sanergy, a company that seeks to improve sanitation conditions while simultaneously creating jobs and profit. Their model proposes to create a sustainable sanitation cycle that has significant positive environmental, health, economic and social impacts.

In a presentation at the 13th Annual MIT Venture Capital Conference this week, the pair explained that Sanergy’s goal is to build thousands of modular, low-cost (about $200) “sanitation centers” that people could use on an unlimited basis by purchasing an estimated $1 monthly membership. Measuring 10 feet by 6 feet, each center would contain a clean, safe toilet, and operators would also be able to sell products like toilet paper. The centers would be franchised to local entrepreneurs, creating an added incentive for the facilities to be maintained.

Contractors would collect the waste and transport it to a processing facility where it would be converted into biogas (a combination of methane and carbon dioxide) through anaerobic digestion, a process by which microorganisms break down biodegradable material. The leftovers from this process would be converted into organic fertilizer while the methane would be converted into electricity. Both products would be sold back to the open market for profit. That profit would then be reinvested to scale the infrastructure to reach more people.

“This is about building a sustainable business model,” says Vallabhaneni, now a Legatum Fellow, who conceived of Sanergy with Auerbach as part of a class assignment to come up with a viable model for a business that would have a large impact. The Sanergy team, which now includes six MIT students, an alumnus and a D-Lab affiliate, built two centers last summer and is raising funds to build 25 centers for a full-scale pilot study next summer.

In January, the Sanergy team won a seed grant from the Legatum Center for Development & Entrepreneurship and an IDEAS Development Grant to travel to Kenya to conduct a feasibility study and surveys about sanitation issues. During the spring semester, the group raised $25,000, including support from MIT’s Public Service Center, to fund a proof-of-concept in Nairobi last summer.

The team, which grew to include Ella Peinovich (graduate student in the Department of Architecture), Joel Veenstra (undergraduate student from the Department of Civil and Environmental Engineering) and D-Lab designer Nathan Cooke, spent a month in Cambridge designing a prototype. They then traveled to Nairobi, where they constructed a workshop space and fabrication tools and built two toilets using metal molds and cement. Team members installed one toilet inside a school and the other at a site in Kibera, one of the world’s largest slums, with about 1 million inhabitants. For now, Sanergy is subsidizing the operations of both centers, which involves paying community members to clean the toilets, collect waste and convert it into biogas for cooking.

“We have to make sure [the centers] are viable enough for people to be able to make a living wage,” says Auerbach of Sanergy’s goal to start small. He and Vallabhaneni receive daily reports from managers at the two centers and are analyzing the data to determine areas of improvement for the pilot. They have already learned that they need to boost their marketing efforts: Although the toilet in Kibera is receiving about 10 to 20 visitors daily, that number needs to be at least 75 for the center to be viable for an operator.

George Kogolla, executive director of Carolina for Kibera, an international non-governmental organization that has been working in Kibera for the past decade, helped the Sanergy team install one of the toilets last summer. He likes Sanergy’s model because it doesn’t require lots of space or complicated technology and exploits readily available local materials and labor. If implemented in the right locales, Sanergy has the “potential to provide a stable source of income while promoting dignity and privacy for users — rights that have been traded for survival in a setting like Kibera,” he says.

In the future, the waste from Sanergy’s centers would be transported to a central processing facility, where it would be converted to biogas. The biogas would then be burned in a CHP (combined heat and power) engine, converting the methane into electricity. Additionally, the leftover wastewater from this process would be converted into fertilizer. According to Sanergy’s business plan, selling electricity and fertilizer back to the open market could produce $72 million per year in additional revenues in Kenya alone — if the pilot program is expanded to all of Kenya’s slums. The Kenyan government has opened the power-generation market to private entities because of severe power shortages. In addition, the price of fertilizer in Kenya is so high that there is a need for domestic organic fertilizer to offset imported chemicals.

Auerbach and Vallabhaneni will wait for results from the pilot study before planning the construction of the processing facility. Although they are wary of scaling up too rapidly, they say that Sanergy’s model can be replicated in other developing countries. Yet they acknowledge that even though their five-year plan is to build 5,000 sanitation centers that would service more than 1 million people, this would only address about 8 percent of the population in need in Kenya.

In The World is a column that explores the ways members of the MIT community are developing technology — from the appropriately simple to the cutting edge — to help meet the needs of communities around the planet, especially those in the developing world. If you have suggestions for future columns, please e-mail newsoffice@mit.edu.