Homework copying can turn As into Cs, Bs into Ds 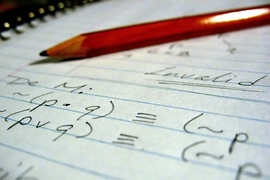 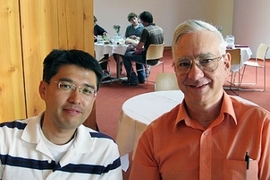 Caption:
Former postdoctoral fellow Young-Jin Lee, left, and David E. Pritchard, the Cecil and Ida Green Professor of Physics
Copying a few answers from another student’s math or science homework assignment occurs much more frequently than copying during examinations or plagiarism on term papers. It is rarely prosecuted by discipline committees and is regarded by many American college students as either not cheating at all or simply a minor infraction. Now educators at MIT have shown that homework copying is associated with greatly decreased learning — and have developed changes in instructional format that reduced copying by a factor of four in certain physics classes at MIT.

The group investigated the effect of homework copying on students’ performance. It found that the copying of problems that require algebraic responses correlated with two letter grades’ worse performance on problems demanding similar responses on a final exam (but found that copying did not adversely affect grades on conceptual questions). This decline caused repetitive copiers — students who copy over 30 percent of their homework problems — to have over three times the failure rate of the rest of the students in spite of their starting the semester with equal ability in math and physics.

According to Lee, now assistant professor of educational technology at the University of Kansas, “The decrease of copiers’ relative performance over the semester is as strong as anything in the education literature. Since the copiers do learn physics topics on which they don’t copy the homework, it strongly implies that copying caused their declining relative performance on the algebraic problems later in the semester.”

The copying showed surprisingly strong temporal patterns. Students who copied little or none of their homework had completed about half of their weekly assignment two nights before it was due, whereas repetitive copiers had done only about 15 percent. More dramatically, the rate of copying increased notably over the semester and was three times higher after midterm exams than during the first three weeks of the semester. “It took them about three weeks to establish their networks,” said Palazzo, now a professor at the U.S. Military Academy.

By measuring actual copying, this work provides a checkpoint for the large body of work on academic dishonesty based on anonymous surveys of students. The actually observed rate was about 50 percent higher than on a similar anonymous survey given to the MIT students. In addition, survey data combined with actual copying patterns confirmed three demographic indicators found in previous self-reported work: men copied significantly more than women, business majors copied much more than either scientists or engineers, and those most interested in obtaining a grade copied more than those most interested in obtaining an education. In addition, it appears that students interested merely in obtaining a passing grade delay starting serious work and resort to copying under pressure of the deadline.

In surveys, students nationally report both more academic dishonesty and more moral tolerance for it than do students at MIT. “It’s hard to escape the conclusion that homework copying is an even worse problem nationally than in the worst semester we studied at MIT,” said Palazzo. The surveys also reveal that more copying is reported for written than for online homework; at MIT, students reported nearly twice as much copying of written homework as of online homework.

A remedy for copying

The MIT group observed the overall copy rate decline by a factor of four over three years as changes were made to the instructional format. The largest reduction of copying occurred when Physics I: Classical Mechanics (8.01) was changed from a lecture-recitation format to the more intimate technology-enabled active learning (TEAL) format, which features more personal contact with teachers and teaching assistants (and a student-to-staff ratio below 20). A further factor of two reduction occurred in Physics II: Electricity and Magnetism (8.02) when the interface in the course’s tutoring program was changed to make copying more difficult and the grading system changed from pass/no record to A, B, C/no record.

Pritchard concludes from his research that copying written homework is a serious cause of course failure nationally, especially in large lecture-recitation courses. “We came upon homework copying through our research on learning in an online environment, rather than through moral concern,” Pritchard says. “But our results are so strong that they place a moral imperative on teachers to confront homework copying and to reduce it. Fortunately, we found some changes that dramatically reduce copying without turning teachers into policemen.”