In a presentation at Kresge Auditorium, the philanthropist will discuss the importance of service.
News Office
Publication Date:
Press Inquiries 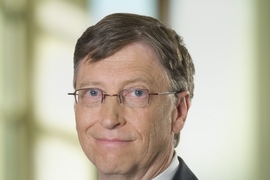 Gates’ visit to MIT is part of a three-day tour of five universities across the country. At each campus, he will give a short talk aimed at inspiring students and teachers to focus on issues of inequity.

Gates last spoke at MIT in March 2004, when he talked to students about the allure of computer science. It was during that same spring that MIT’s Ray and Maria Stata Center for Computer, Information, and Intelligence Sciences opened. The center, which the Bill & Melinda Gates Foundation helped fund, houses the William H. Gates Building.

“Bill Gates brings the same dedication and enthusiasm to philanthropy that he brought to the computer industry he transformed,” said MIT President Susan Hockfield. “His deep commitment to helping solve the world’s most pressing problems will powerfully resonate with the MIT community, and I look forward to welcoming him back to campus.”

Gates’ presentation in Kresge, “Giving Back: Finding the Best Way to Make a Difference,” will be followed by a Q&A session with audience members.

Gates co-founded Microsoft in 1975 but left his full-time duties at the software giant in 2008 to focus on running his foundation. With an endowment of $33.5 billion, the foundation works to help all people lead healthy, productive lives. In developing countries, it focuses on improving people’s health and giving them the chance to lift themselves out of hunger and extreme poverty. In the United States, it seeks to ensure that all people — especially those with the fewest resources — have access to the opportunity they need to succeed in school and life.

Tickets for the presentation, which will run from 11:30 a.m.-12:30 p.m., will be distributed via a lottery. To register, please visit http://web.mit.edu/surveys/event/.