A new approach to bladder-disease treatment 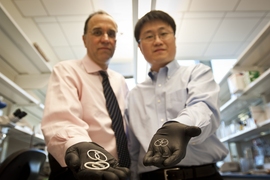 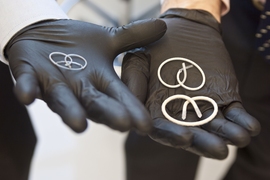 Caption:
A close-up of the devices.
Credits:
Photo: Patrick Gillooly
A bladder disease called interstitial cystitis affects at least a half-million people in the United States, mostly women, with perhaps an equal number undiagnosed. At present, there are no good options for such people; the only treatment that reduces the symptoms of painful and very frequent urination, which can be debilitating and make it impossible to work, is an infusion of the drug lidocaine into the bladder through a catheter, but the treatment only provides brief relief and needs to be repeated frequently.

Researchers at MIT think they have found a much better solution. They fill a small medical-grade silicone tube with the solid drug, after drilling a tiny hole in the tube using a laser beam. A shape-memory wire made of nitinol is threaded through the tube, which is then straightened out, placed in a catheter, and inserted into the bladder. As soon as it is released there, the nitinol wire causes the device to spring back into a pretzel-like shape, which prevents it from being expelled from the bladder during urination, and thus it can slowly, steadily release the drug over a two-week period — which would typically be long enough to treat an interstitial cystitis flare-up, something that may occur about three times a year.

The device, developed by Heejin Lee SM ’04, PhD ’09 and Michael Cima, the Sumitomo Electric Industries Professor of Engineering, is undergoing phase-1 clinical trials, and is described in detail in a paper in the Journal of Controlled Release (available online now, and scheduled to appear in an upcoming issue in print). Though it is initially being tested specifically for interstitial cystitis, Cima says that the same delivery system, if all goes well in the clinical trials, could also be used to deliver drugs for other bladder diseases, including chemotherapy for bladder cancer — the form of cancer that has the highest recurrence rate of all, in part because it is so difficult to deliver drugs to the bladder in a sustained way.

“The biggest problem with these treatments is the patients don’t get the drug long enough,” Cima says, noting that doctors try to make up for this shortcoming by using very high concentrations of drugs. The new device could potentially lead to smaller dosages, thus reducing side effects and adverse reactions.

If all goes well, Cima says, the device could become an approved medical product by 2014. Already, a new MIT spinoff company called Taris Biomedical has been established to carry out the testing and bring the device into production. Lee, who developed the device as part of his doctoral thesis work with funding from a Deshpande Center grant, is now working for the company as a product-development scientist.

Compared to the discomfort of having a catheter left in place for an hour under the present standard treatment regime, in this device’s initial phase-1 trial after the quick insertion patients couldn’t even tell that the device had been left in place, Cima says.

Dr. Joseph Grocela, a physician at Massachusetts General Hospital, says he is “very impressed” with this work, which he says was “careful and insightful.” Many patients with interstitial cystitis, he says, “give up hope. This device can give them hope for a better life.” In addition, he says, the technology has potential in treating many other diseases, so this particular condition “I think will be only one of many uses for this device.”

Dr. Joseph Moldwin, a physician at the Arthur Smith Institute for Urology at Long Island Jewish Medical Center, who treats many patients with interstitial cystitis and other bladder diseases, says this is “a very novel device. I’m not aware of anything like it.” And while it is never possible to predict how a given device will fare in clinical testing, he says he thinks “the likelihood is high” that this technology will pan out. He adds that official figures on the incidence of IC may be very low, and there could be as many as 3 million people in the U.S. who have the condition — and possible as many as 30 million with other bladder conditions that might also benefit from this drug-delivery system. One remaining uncertainty is how easy it will be to remove the device at the end of the two-week treatment period, he says, but assuming all goes well in the clinical trials, “I think it will be a wonderful thing” for these patients.