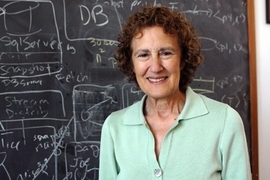 Institute Professor Barbara Liskov has won the Association for Computing Machinery's A.M. Turing Award, one of the highest honors in science and engineering, for her pioneering work in the design of computer programming languages. Liskov's achievements underpin virtually every modern computing-related convenience in people's daily lives.

Liskov, the first U.S. woman to earn a PhD from a computer science department, was recognized for helping make software more reliable, consistent and resistant to errors and hacking. She is only the second woman to receive the honor, which carries a $250,000 purse and is often described as the "Nobel Prize in computing."

"Barbara Liskov pioneered some of the most important advances in fundamental computer science," said Provost L. Rafael Reif. "Her exceptional achievements have leapt from the halls of academia to transform daily life around the world. Every time you exchange e-mail with a friend, check your bank statement online or run a Google search, you are riding the momentum of her research."

Liskov heads the Programming Methodology Group in the Computer Science and Artificial Intelligence Laboratory at MIT, where she has conducted research since 1972. Last year, she was named an Institute Professor, the highest honor awarded to an MIT faculty member.

"For nearly four decades, Barbara has been a seminal leader in programming languages and systems research at MIT, combining great intellectual insights with practicality," said CSAIL Director Victor Zue, the Delta Electronics Professor in the Department of Electrical Engineering and Computer Science. "All of us at CSAIL are extremely pleased and proud of this latest accolade — the highest honor in computer science."

Liskov's early innovations in software design have been the basis of every important programming language since 1975, including Ada, C++, Java and C#.

Liskov's most significant impact stems from her influential contributions to the use of data abstraction, a valuable method for organizing complex programs. She was a leader in demonstrating how data abstraction could be used to make software easier to construct, modify and maintain. Many of these ideas were derived from her experience at Mitre Corp. in building the VENUS operating system, a small, interactive timesharing system.

In another contribution, Liskov designed CLU, an object-oriented programming language incorporating clusters to provide coherent, systematic handling of abstract data types. She and her colleagues at MIT subsequently developed efficient CLU compiler implementations on several different machines, an important step in demonstrating the practicality of her ideas. Data abstraction is now a generally accepted fundamental method of software engineering that focuses on data rather than processes.

Building on CLU concepts, Liskov followed with Argus, a distributed programming language. Its novel features led to further developments in distributed system design that could scale to systems connected by a network. This achievement laid the groundwork for modern search engines, which are used by thousands of programmers and hundreds of millions of users every day and which face the challenges of concurrent operation, failure and continually growing scale.

Her most recent research focuses on techniques that enable a system to continue operating properly in the event of the failure of some of its components. Her work on practical Byzantine fault tolerance demonstrated that there were more efficient ways of dealing with arbitrary (Byzantine) failures than had been previously known. Her insights have helped build robust, fault-tolerant distributed systems that are resistant to errors and hacking. This research is likely to change the way distributed system designers think about providing reliable service on today's modern, vulnerable Internet.

The Turing Award is given annually by the Association for Computing Machinery and is named for British mathematician Alan M. Turing, who invented the idea of the computer and who helped the Allies crack the Nazi Enigma cipher during World War II. Liskov will formally receive the award at an ACM gathering on June 27 in San Diego.