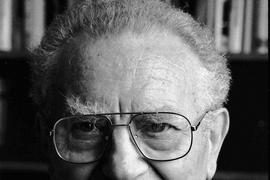 Caption:
Paul Samuelson, an Institute Professor Emeritus and Gordon Y Billard Fellow at MIT, who passed away on Sunday.
Credits:
Photo: Donna Coveney
MIT economist Paul A. Samuelson, the Nobel laureate whose mathematical analysis provided the foundation on which modern economics is built and whose textbook influenced generations of students, died today at his home in Belmont, Mass. He was 94.

Samuelson, an Institute Professor Emeritus and Gordon Y Billard Fellow at MIT, was one of the world’s leading economists for more than half a century. When he became the first American to win the Nobel Memorial Prize in economics in 1970, a year after the prize was created, the Swedish Royal Academy said that he “has done more than any other contemporary economist to raise the level of scientific analysis in economic theory.”

Twenty-six years later, in 1996, when he was awarded a National Medal of Science, America’s top science honor, President Bill Clinton praised his “fundamental contributions to economic science, specifically general equilibrium theory and macroeconomics, and to economic education and policy over a period of 60 years.”

Samuelson’s contributions to the field were so numerous and fundamental that they lend themselves to description in more general terms. "If you did a time and motion study of what any modern economist does at work, you would find that an enormous proportion of standard mental devices trace back to Paul Samuelson's long lifetime of research,” said MIT Institute Professor Emeritus Robert Solow. “What I can add about my beloved friend of 60 years is that he had a marvelous intuition about how a market economy had to be. 'It must work like this,' he would say. 'Now all we have to do is prove it.' There was no one like him."

Samuelson was instrumental in bringing the MIT Department of Economics, which did not train graduate students when he joined it in 1940, to its current stature as a world-renowned research and teaching institution. Reflecting on this at a dinner in 1991 celebrating the establishment of the department’s Samuelson Chair in Economics, Samuelson referred to the department’s development as a “scientific miracle.” Admonishing the audience not to believe “that this was my handiwork alone,” he said that the department, from 1941 to 1960, “went from being a mediocre service department to becoming No. 1 on all foundations’ ranking of departments.” In fact, he quipped, by the mid-1960s the U.S. Department of Justice’s antitrust division was starting to fret about MIT's garnering of most of the National Science Foundation fellowships awarded in economics.

“Two factors explain our success,” Samuelson wrote in 2000. “One, MIT's renaissance after World War II as a federally supported research resource. Two, the mathematical revolution in macro- and micro-economic theory and statistics: this was overdue and inevitable — MIT was the logical place for it to flourish.”

As MIT President Susan Hockfield framed it, “Paul Samuelson transformed everything he touched: the theoretical foundations of his field, the way economics was taught around the world, the ethos and stature of his department, the investment practices of MIT, and the lives of his colleagues and students. Intellectually and personally, his vision created the intensely collaborative culture of MIT's Department of Economics, and in everything he did, he represented the very best of MIT.”

‘One of the giants’

Samuelson produced the best-selling economics text of all time, Economics: An Introductory Analysis. First published in 1948 and originally prepared for MIT’s then-mandatory undergraduate economics course, Samuelson’s textbook was the first to explain the principles of Keynesian economics to beginning economics students. It has been translated into 40 languages, and is now in its 19th edition in English. The textbook has sold nearly four million copies over a span of 60 years.

Samuelson’s textbook influenced generations of students, said James Poterba, MIT’s Mitsui Professor of Economics and former head of MIT’s Department of Economics. He noted that for decades, future scholars, policy-makers, and business executives were introduced to contemporary economics by Samuelson’s book. “He leaves an immense legacy, as a researcher and a teacher, as one of the giants on whose shoulders every contemporary economist stands,” Poterba said.

In the area of policy, Samuelson never held a major government post but, true to his belief that economists should be involved in social issues, he served as an adviser to Presidents John F. Kennedy and Lyndon B. Johnson and was a consultant to government, foundations and companies. He also commented frequently on economic policy matters and for years made his views known to the public through a column in Newsweek magazine.

Often referred to as an economist’s economist, Samuelson once wrote: “In this age of specialization, I sometimes think of myself as the last ‘generalist’ in economics. My interests range from mathematical economics to current financial journalism.”

Samuelson continued to work long after his official retirement in 1985, arriving at his office at MIT regularly and remaining an active member of the department. Displaying his well-known wit, he told the gathering celebrating the Samuelson Chair, “That’s what I would like to do until the end of time — to go on scribbling my articles on the third floor of the Sloan Building, in between playing tennis and drinking coffee at my other study in the Concord Avenue branch of Burger King.”

Ricardo Caballero, the Ford International Professor of Economics and head of MIT’s Department of Economics, said Samuelson remained a central figure in all the department’s gatherings until the very end.

“He always had the last — and the first — word, and deservedly so,” Caballero said. “We will miss him and his unmatched wit very much, but his intellectual legacy is enormous and perennial. The world is different today because he was with us for many years."

Paul Anthony Samuelson was born in Gary, Ind., on May 15, 1915. He received a BS from the University of Chicago in 1935, an MA in 1936 from Harvard University and the PhD, with a David A. Wells Prize, from Harvard in 1941. He was an early Junior Fellow at the Harvard Society of Fellows.

He was appointed an assistant professor of economics at MIT in 1940, associate professor in 1944, and full professor in 1947. In 1966, he was named Institute Professor, MIT’s highest faculty honor.

Even as a graduate student at Harvard, Samuelson won international acclaim and made significant contributions to economic theory. Confronted by contradictions, overlaps and fallacies in the classical language of economics, he sought unification — and clarification — in mathematics.

In his first major work, Foundations of Economic Analysis (1947), which was also his PhD thesis, he told economists that they had been practicing “mental gymnastics of a particularly depraved type,” and were like “highly trained athletes who never ran a race.” He did not claim mathematics would cure the ills of economic analysis, but he did insist that mathematics was essential.

The Swedish Royal Academy said in its Nobel citation that in this first book and in a large number of articles as well, Samuelson had “rewritten considerable parts of central economic theory and has in several areas achieved results which now rank among the classical theories of economics.”

In his work on the theory of balance between prices and supply and demand, the academy said, Samuelson had succeeded in “formulating the theory in mathematical terms. The matter of approach, how to handle this problem, is what his contribution was.”

As an adviser to Kennedy and Johnson, Samuelson advocated tax cuts and the war on poverty. In 1974, he was one of 21 economists to attend President Gerald Ford’s two-day “inflation summit conference.” There, he said America had been stricken with a bad case of “stagflation” — the toxic mix of high unemployment and high inflation over long periods of time.

In addition to receiving the Nobel Prize and National Medal of Science, Samuelson was the inaugural winner of the John Bates Clark Medal, the American Economic Association's award for the best American economist under the age of 40, in 1947. He served as president of the American Economic Association and the Econometric Society. He was the author of hundreds of articles in professional journals and magazines, and served as associate editor and a member of the advisory and editorial boards of several professional journals. The Collected Scientific Papers of Paul A. Samuelson have been published in five volumes, containing about 400 articles, by the MIT Press. Another 200 papers will be published in volumes 6 and 7, now in progress.

His memberships and fellowships included the American Academy of Arts and Sciences, the British Academy, Phi Beta Kappa, the International Economic Association (president, 1965-68 and lifetime honorary president), the National Academy of Sciences, where he served on the Finance Committee from 1977 until 2009, and the American Association for the Advancement of Science.

Samuelson was a distinguished lecturer at more than 20 colleges, universities and professional societies, and received 35 honorary degrees.

In lieu of flowers, the family requests that donations be made to the Massachusetts Audubon Society, 208 South Great Road, Lincoln, MA 01793.

Funeral arrangements will be private. A memorial service for Samuelson is scheduled for Saturday, April 10, at 11 a.m.

The Wall Street Journal’s Jason Zweig examines the investment strategies of former Institute Prof. Paul Samuelson, including his purchases of Berkshire Hathaway stock in the early 1970s. Zweig notes, “In an interview this week, [Warren] Buffett says Prof. Samuelson believed the same thing he does: that markets are 'generally very efficient but not perfectly efficient.'”