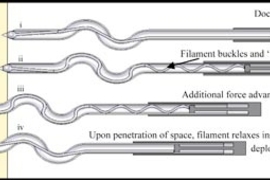 Each year, hundreds of thousands of people suffer medical complications from hypodermic needles that penetrate too far under their skin. A new device developed by MIT engineers and colleagues aims to prevent this from happening by keeping needles on target.

The device, which is purely mechanical, is based on concepts borrowed from the oil industry. It involves a hollow S-shaped needle containing a filament that acts as a guide wire. When a physician pushes the device against a tissue, she is actually applying force only to the filament, not the needle itself, thanks to a special clutch.

When the filament, which moves through the tip of the needle, encounters resistance from a firm tissue, it begins to buckle within the S-shaped tube. Due to the combined buckling and interactions with the walls of the tube, the filament locks into place "and the needle and wire advance as a single unit," said Jeffrey Karp, an affiliate faculty member of the Harvard-MIT Division of Health Sciences and Technology (HST) and co-corresponding author of a recent paper on the work in the Proceedings of the National Academy of Sciences.

The needle and wire proceed through the firm tissue. But once they reach the target cavity (for example, a blood vessel) there is no more resistance on the wire, and it quickly advances forward while the needle remains stationary. Because the needle is no longer moving, it cannot proceed past the cavity into the wrong tissue.

Karp believes that the device could reach clinics within three to five years pending further pre-clinical and clinical testing.

First author Erik K. Bassett, now at Massachusetts General Hospital (MGH), developed the device for his MIT master's thesis. He did so under Alexander Slocum, the Neil and Jane Pappalardo Professor of Mechanical Engineering, with guidance from Karp and Omid Farokhzad of HST, Harvard Medical School (HMS) and Brigham and Women's Hospital (Karp is also affiliated with the latter two). Additional authors are also from HMS and MGH.

The work was funded by the Deshpande Center for Technological Innovation at MIT and the Center for Integration of Medicine and Innovative Technology (CIMIT).