A greener way to get electricity from natural gas

A proposed system would use solid-oxide fuel cells to produce power without sending CO2 into the atmosphere. But can it compete with conventional power plants?
David L. Chandler, MIT News Office
Publication Date:
Press Inquiries 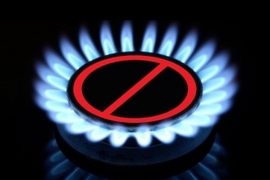 Credits:
Graphic: Christine Daniloff
A new type of natural-gas electric power plant proposed by MIT researchers could provide electricity with zero carbon dioxide emissions to the atmosphere, at costs comparable to or less than conventional natural-gas plants, and even to coal-burning plants. But that can only come about if and when a price is set on the emission of carbon dioxide and other greenhouse gases — a step the U.S. Congress and other governments are considering as a way to halt climate change.

In findings recently published online in the Journal of Power Sources, postdoctoral associate Thomas Adams and Paul I. Barton, the Lammot du Pont Professor of Chemical Engineering, propose a system that uses solid-oxide fuel cells, which can produce power from fuel without burning it. The system would not require any new technology, but would rather combine existing components, or ones that are already well under development, in a novel configuration (for which they have applied for a patent). The system would also have the advantage of running on natural gas, a relatively plentiful fuel source — proven global reserves of natural gas are expected to last about 60 years at current consumption rates — that is considered more environmentally friendly than coal or oil. (Present natural-gas power plants produce an average of 1,135 pounds of carbon dioxide for every megawatt-hour of electricity produced — half to one-third the emissions from coal plants, depending on the type of coal.)

Natural gas already accounts for 22 percent of all U.S. electricity production, and that percentage is likely to rise in coming years if carbon prices are put into effect. For these and other reasons, a system that can produce electricity from natural gas at a competitive price with zero greenhouse gas emissions could prove to be an attractive alternative to conventional power plants that use fossil fuels.

The system proposed by Adams and Barton would not emit into the air any carbon dioxide or other gases believed responsible for global warming, but would instead produce a stream of mostly pure carbon dioxide. This stream could be harnessed and stored underground relatively easily, a process known as carbon capture and sequestration (CCS). One additional advantage of the proposed system is that, unlike a conventional natural gas plant with CCS that would consume significant amounts of water, the fuel-cell based system actually produces clean water that could easily be treated to provide potable water as a side benefit, Adams says.

Although no full-scale plants using such systems have yet been built, the basic principles have been demonstrated in a number of smaller units including a 250-kilowatt plant, and prototype megawatt-scale plants are planned for completion around 2012. Actual utility-scale power plants would likely be on the order of 500 megawatts, Adams says. And because fuel cells, unlike conventional turbine-based generators, are inherently modular, once the system has been proved at small size it can easily be scaled up. “You don’t need one large unit,” Adams explains. “You can do hundreds or thousands of small ones, run in parallel.”

Adams says practical application of such systems is “not very far away at all,” and could probably be ready for commercialization within a few years. “This is near-horizon technology,” he says.

Adams and Barton, with funding from the BP-MIT Conversion Research Program,  used computer simulations to analyze the relative costs and performance of this system versus other existing or proposed generating systems, including natural gas or coal-powered systems incorporating carbon capture technologies.

Combined-cycle natural gas plants — the most efficient type of fossil-fuel power plants in use today — could be retrofitted with a carbon-capture system to reduce the output of greenhouse gases by 90 percent. But the MIT researchers’ study found that their proposed system could eliminate virtually 100 percent of these emissions, at a comparable cost for the electricity produced, and with even a higher efficiency (in terms of the amount of electricity produced from a given amount of fuel). Jack Brouwer, associate director of the National Fuel Cell Research Center at the University of California, Irvine, says that the high efficiency and the carbon separation capabilities of solid-oxide fuel cell technology “are indeed impressive.”

Absent any price for carbon emissions, Adams says, when it comes to generating electricity “the cheapest fuel will always be pulverized coal.” But as soon as there is some form of carbon pricing — which attempts to take into account the true price exacted on the environment by greenhouse gas emissions — “ours is the lowest price option,” he says, as long as the pricing is more than about $15 per metric ton of emitted carbon dioxide. Such a pricing mechanism would be put in place, for example, by the Waxman-Markey “American Clean Energy and Security Act” that was passed by the U.S. House of Representatives in July, through its “cap and trade” provisions. (A corresponding bill has not yet reached the floor of the U.S. Senate.) If the program becomes law, the actual price per ton of carbon would vary, being determined through the free market.

CCS is considered the only practical way of meeting reduced emissions targets under a cap-and-trade program, because alternatives to the use of fossil fuels are not far enough advanced to be able to quickly replace them at reasonable cost. CCS involves separating out the carbon dioxide from other gases in the plant’s exhaust, and then injecting them into deep geological formations (for example, in depleted oil wells) to keep them from going into the atmosphere. Most approaches to capturing the carbon dioxide emissions from a fossil-fuel power plant require the use of a chemical solvent that absorbs the carbon dioxide from a mixture of gases — a process that is inherently inefficient and adds significantly to the cost of the power produced. Adams and Barton’s system eliminates this inefficient separation step.

One of the critiques most often leveled against proposals for fuel-cell power plants is that the technology has high initial costs compared to conventional combustion technologies. But the new study found that once carbon pricing is in effect, even if the cost of fuel cells remains more than double that targeted by the U.S. Department of Energy for 2010, the solid-oxide fuel cell system would be the cheapest option available in terms of lifecycle costs of electricity produced, even though the up-front capital costs could be three to four times greater than for natural gas or coal combustion systems.

In fact, the system’s predicted efficiency is so high that it beats the lifecycle cost of a combined-cycle natural gas plant, even without carbon pricing. And the study shows that a very low level of carbon tax, on the order of $5 to $10 per ton, would make this technology cheaper than coal plants, which are currently the lowest cost option for electricity generation.