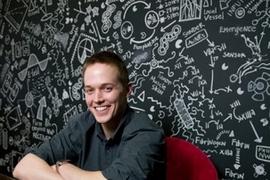 MIT graduate student and biomedical engineer Geoffrey von Maltzahn is this year's winner of the $30,000 Lemelson-MIT Student Prize for his promising innovations in the area of cancer therapy. The 28-year-old PhD candidate in the Harvard-MIT Division of Health Sciences and Technology (HST) was selected specifically for two of his inventions in nanomedicine: a new class of cancer therapeutics and a new paradigm for enhancing drug delivery to tumors.

Cancer currently kills more people worldwide than HIV/AIDS, tuberculosis and malaria combined. Despite billions of dollars invested in drug development and decades of research, selectively eradicating cancer cells has remained an elusive goal. Chemotherapies, a common class of cancer treatments, are intended to kill the fast-growing cells that form tumors. However, these drugs travel throughout the entire body, and often affect normal, healthy tissue along with cancer cells, causing side effects such as hair loss, nausea, anemia, and even nerve and muscle problems. Furthermore, people can develop resistance to these drugs, causing even initially successful treatment regimens to fail.

Working at the confluence of nanotechnology, engineering and medicine, von Maltzahn's innovations have the potential to reduce side effects and overpower drug resistance mechanisms by more powerfully concentrating external energy and targeted therapeutics in tumors.

Since 2004, von Maltzahn has worked closely with his advisor, Sangeeta N. Bhatia, a professor in HST and in the Department of Electrical Engineering and Computer Science, to invent novel treatments that could precisely target and destroy tumor cells without affecting healthy tissue. Seeking to improve the specificity of cancer ablation -- the destruction of tumors through the application of heat -- von Maltzahn developed polymer-coated gold "nano-antennas" that can target tumors and convert benign-infrared light into heat.

The nanoparticles are designed to be injected intravenously, where they circulate through the bloodstream and progressively concentrate at the tumor site by infiltrating pores in rapidly growing tumor blood vessels. Once in the tumor, the antennas can be precisely heated with a noninvasive, near-infrared light to specifically kill the cancerous cells. "The polymer-coated gold nano-antennas are the longest-circulating and most efficiently heated to date," said Bhatia, who is also affiliated with the Microsystems Technology Laboratories, the David H. Koch Institute for Integrative Cancer Research, and the Center for Environmental Health Sciences. "Pre-clinical trials reveal that a single intravenous nanoparticle injection eradicated 100 percent of tumors in mice using a near-infrared light. The results of these trials are very promising, meaning that the impact of this technology is wide-reaching with many potential applications."

Von Maltzahn's second invention aims to fundamentally improve the intravenous delivery of therapeutics to tumors by taking a systems approach to their design. This work draws on insights from biological systems, such as ants foraging and bees swarming, where relatively simple methods of communication can lead to very sophisticated system behaviors.

Inspired by the potential for inter-nanoparticle communication to improve therapeutics' ability to find tumors, von Maltzahn invented a series of ways for nanoparticles to talk to one another in the body. One method involves benign scout particles that initially locate the tumor and, once inside, send powerful signals to recruit secondary, 'assassin' particles that contain the therapeutics. In preclinical trials, this system has been able to deliver more than 40 times stronger doses of therapeutics to tumors in mice, in comparison to non-communicating control nanoparticles.

"If such highly targeted delivery can be achieved clinically, this method would enable doctors to increase the drug dose that is delivered to tumors, increasing its overall efficacy and reducing side effects," von Maltzahn explains. "This concept of engineering systems of nanoparticles that collectively outsmart disease barriers has many potential applications in medicine, from improving regenerative medicines to ultra-sensitive diagnostics."

Von Maltzahn's work has already made a significant impact scientifically and commercially, resulting in eight patent applications, 19 submitted or published papers, and his founding roles in two companies: Nanopartz Inc. and Resonance Therapeutics.

Nanopartz was founded more than a year ago to address the nanotechnology industry's need for dependable and standardized nanoparticle sources. Von Maltzahn's goal with Nanopartz is to aid in research endeavors worldwide by supplying a repertoire of gold nanoparticles for a broad spectrum of commercial applications, ranging from biomedicine to energy.

Resonance Therapeutics was founded to bring nanorods toward clinical applications and to develop technologies that amplify the efficacy of existing cancer therapeutics.

"In addition to the long hours spent in the lab, finishing up his PhD, and founding two companies, Geoff mentored 14 undergraduate students, taking them out of the classroom setting and inspiring them to make the link from science to the real world," says Joshua Schuler, executive director of theLemelson-MIT Program. "Geoff is not only a mentor for aspiring scientists, but also a shining example of bridging the gap between technological invention and entrepreneurship."

During von Maltzahn's time at MIT he has also developed inventions outside of the polymer nanorods and systems nanotechnology paradigm for improving drug delivery, including a low-cost method for hemorrhage detection; a new class of self-assembling lipid-like peptides with promising applications in gene therapy; sensors for detecting tumor protease hot-spots in MRI; a method for remotely controlling drug release from nanoparticles; and a variety of new nanostructures for improved drug delivery and imaging.

The $30,000 Lemelson-MIT Student Prize is awarded annually to an MIT senior or graduate student who has created or improved a product or process, applied a technology in a new way, redesigned a system, or demonstrated remarkable inventiveness in other ways. A distinguished panel of MIT alumni including scientists, technologists, engineers and entrepreneurs chooses the winner.