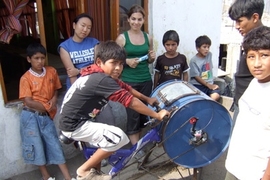 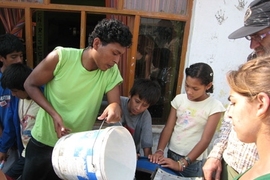 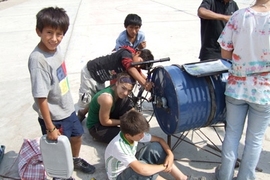 Caption:
MIT students and residents of Ventanilla, Peru work on the bicilavadora, a novel, inexpensive bike/washing machine.
Credits:
Photo: Gwyndaf Jones
In many developing countries, electricity is unreliable or unavailable and water must be carried by hand, so conventional modern washing machines are not an option. Washing clothes can take up a significant amount of time, and doing laundry in open streams or lakes can add to water pollution, so the availability of a human-powered washing machine could make a big difference to the quality of life.

A pedal-powered washing machine that MIT students and staff built mostly from bicycle parts and empty barrels could solve many of these problems, and at the same time could be built locally and thereby create jobs.

// MIT Tech TV
MIT students and residents of an orphanage in Peru work on, and try out, the bicilavadora.
Video: Gwyndaf Jones

Under development for almost four years, the new machine — dubbed "bicilavadora," combining the Spanish words for bicycle and washing machine — got its most rigorous workout last month when a team of MIT students took the latest prototype to an orphanage in the slums called Ventanilla outside Lima, Peru. With 670 resident children, the home generates enough laundry to keep the washer perpetually busy.

"The orphanage was like an oasis in the slums of Ventanilla," says Lisa Tacoronte, a junior in mechanical engineering who worked on the project. As the MIT team worked to set up the machine, "many of the children would watch us work, ask us questions at the same time or try to help us by holding things, or handing us tools while we built it."

The machine was designed to be easy and inexpensive to manufacture, mostly using parts and tools that are readily available almost everywhere in the developing world.

An earlier version of the washing machine, developed by mechanical engineering graduate student Radu Raduta, won first prize in the MIT IDEAS competition in 2005. That resulted in some funding for further development, which led Raduta to improve the design of the machine's inner drum so that it could be more easily manufactured and transported.

The machine's outer housing is made from a standard oil drum cut apart and welded back together to make a much shorter barrel, because "a full 55-gallon barrel is more laundry than any human can pedal," explains Gwyndaf Jones, a D-Lab instructor who worked on the earlier version and who led this year's Peru field trip. The inner, rotating drum is made from a set of identical plastic pieces bolted together, which can be taken apart and stored flat for easy transportation. That was the key part of Raduta's design.

"The hardest part to build is the inner drum," Raduta explains, "because it's submerged in water, and full of clothing that can have metal buttons, which abrades the inner walls. It has to be stiff enough to keep its shape, but if it's bare steel it will rust, and paint will peel off." The key part of his thesis research was figuring out how to make the drum strong enough, cheap enough and easy and inexpensive to ship. His latest version is made from molded plastic panels, and when disassembled it is compact enough to fit in a suitcase — which is how the students took it to Peru for the January trip.

The "motor" of the machine consists of a bicycle frame, minus its wheels, with the chain running forward to a gear at the end of the washer drum's shaft. "It uses a standard mountain bike gear range," Jones says. "The highest gear is the spin cycle, and the lowest gear is the wash cycle."

The test was not a total success: Some water leaked around the edges of the barrel, which could cause rust, and very inexpensive bearings used for the shaft were too stiff. But the basic design was well proven out, and with a few small changes an updated version should be able to handle the intensive workload. Further tests will be carried out this spring by other students.

While crucial pieces such as the inner drum segments were brought along from MIT, others including the outer drum and its supporting structure were built on-site. "We improvised for whatever we didn't have and often learned how from locals like Wilbur and Gennard," two of the older orphanage residents, Tacoronte says. "For example, we were unable to cut the two sides for the door on the outer drum that were parallel to the curved surface. Wilbur took up a chisel and went at it with a hammer. The door was done in seconds."

She found the experience very inspiring. "The more time I spent there and the more amazing people I met, the more passionate and determined I became about finishing the lavadora and making sure it worked," she says. After the first test run, with the high-gear spin cycle successfully eliminating most of the water from the drum, she says, "The moment they pulled out the merely damp sheets was exhilarating."