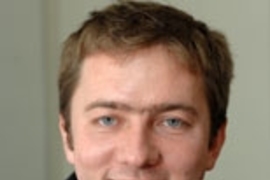 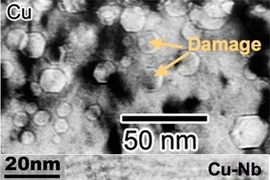 ↓ Download Image
Caption: When copper is irradiated, defects form in the metal lattice (top photo). In a nanocomposite of copper and niobium, radiation damage is contained by interfaces between the copper and niobium layers (bottom photo).
Credits: Courtesy / Michael Demkowicz

Caption:
When copper is irradiated, defects form in the metal lattice (top photo). In a nanocomposite of copper and niobium, radiation damage is contained by interfaces between the copper and niobium layers (bottom photo).
Credits:
Courtesy / Michael Demkowicz

Composite materials such as fiberglass, which take on a mix of properties of their constituent compounds, have been around for decades. Now, an MIT materials scientist is taking composites to the nanoscale, where entirely new properties, not found in any of the original compounds, can emerge.

Michael Demkowicz, an assistant professor in MIT's Department of Materials Science and Engineering, is part of a team based at Los Alamos National Laboratory that recently received a federal Energy Frontier Research Centers grant to develop nanocomposite materials that can endure high temperatures, radiation and extreme mechanical loading. The ultimate goal is to use these materials in energy applications including nuclear power, fuel cells, solar energy and carbon sequestration.

"All sectors of energy production need materials that can withstand extreme conditions," says Demkowicz, whose model offers a new approach to designing nanocomposites with desirable traits.

There are many models that can take a proposed material structure and predict how it will behave. However, such trial-and-error approaches still require repeated cycles of manufacture and testing and are "an extremely costly and time-consuming way to come up with a new material," says Demkowicz.

His model tackles what materials scientists call "the inverse problem" -- specifying a desired set of properties and then predicting which structures will deliver them -- and could dramatically speed up the design process.

Demkowicz' first target is radiation-resistant materials, which could improve the efficiency and safety of nuclear power plants.

Normally, when metals are exposed to radiation, high-energy particles such as neutrons bump into individual atoms and knock them out of their crystal lattice. Like billiard balls, the displaced atoms bump into neighboring atoms, spreading damage in the form of "vacancies" (holes where an atom is missing), and "interstitials" (an extra atom squeezed in where it shouldn't be). Clusters of these defects can make the material brittle and weak.

Above: In this video, radioactive particles bombarding the interface of a copper-niobium nanocomposite initially damage the material, but the damage is quickly contained. Courtesy/Michael Demkowicz

In some nanocomposites, vacancies and interstitials can get trapped at interfaces, where they have a higher likelihood of meeting. When that happens, the extra atom fills in the hole and the crystal structure is restored. Under some conditions it can appear as if there was no radiation damage remaining at all, says Demkowicz.

Materials resistant to radiation damage could eventually be used to line nuclear reactors, a function now performed by stainless steel. That could extend the lifetime of nuclear reactors and allow them to operate under higher radiation doses. Whereas current reactors consume only about one percent of their fuel, these improved reactors could burn a higher percentage of nuclear fuel and leave behind less waste.

Demkowicz has used his model, which is based on reproducing the mechanical interactions of groups of atoms, to design a nanocomposite with interfaces that resist radiation. The material, described in Physical Review Letters last year, is a mix of copper and the metal niobium and could not be used in a nuclear reactor because it absorbs neutrons and becomes radioactive. However, now that he knows copper-niobium is resistant to radiation damage, Demkowicz can use his modeling techniques to look for other materials that share that property.

Once a promising candidate is identified, it takes several years of testing before a new material can be approved for use in a nuclear reactor, so it will likely be at least a decade before any of his potential new materials can be used, says Demkowicz.

In addition to Demkowicz, several other MIT researchers are involved in the new Energy Frontier Research Centers. MIT will host two of the centers -- the Center for Excitonics, led by Associate Professor Marc Baldo, and the Solid-State Solar-thermal Energy Conversion Center, led by Professor Gang Chen.