Spinning at the nanoscale 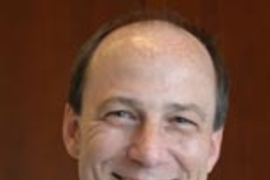 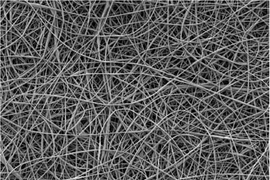 In his office, MIT Professor of Chemical Engineering Gregory Rutledge keeps a small piece of fabric that at first glance resembles a Kleenex. This tissue-like material, softer than silk, is composed of fibers that are a thousand times thinner than a human hair and holds promise for a wide range of applications including protective clothing, drug delivery and tissue engineering.

Such materials are produced by electrospinning, a technique that has taken off in the past 10 years, though the original technology was patented more than a century ago. In Rutledge's lab, researchers are exploring new ways to create electrospun fibers, often incorporating materials that add novel features such as the ability to kill bacteria.

"We're still in the Wild West mode of discovery," says Rutledge. "People are hypothesizing almost anything and giving it a try. We're still trying to figure out which ones are the payoff applications."

Rutledge has been one of the pioneers of electrospinning nanofibers since the nanotechnology boom of the late 1990s. Though he describes the actual electrospinning process as almost "a mundane thing," he and his colleagues have demonstrated a number of ways to create electrospun membranes with new and useful traits.

Electrospinning, the most general way to make a continuous polymer nanofiber, uses an electrical charge to draw the fiber from a liquid polymer. As a jet of charged fluid polymer sprays out the bottom of a nozzle, an electric field forces the stream to whip back and forth, stretching the fiber lengthwise so its diameter shrinks from 100 microns to as little as 10 nanometers.

The fiber forms a thin membrane as it hits the surface below the nozzle. These electrospun membranes have a unique combination of stretchiness and strength, and are easy to handle, making them suitable for a wide range of applications. Because the membranes are very porous (they contain 85 percent open space), they are already used as HEPA (high efficiency particle accumulation) filters, found in vacuum cleaners and military tanks.

In the past few years, Rutledge's team has produced several textiles that incorporate functional materials into the electrospun membranes. One major focus is designing textiles that can protect against toxic agents, both biological and chemical, by adding protective compounds to the polymer.

One such material, described in the journal Polymer last year, incorporates chlorhexidine, which can kill most bacteria. Rutledge's team is also working with oximes, a class of organic compounds that can break down organophosphates, chemicals that are the basis of many pesticides, insecticides and nerve gases. Materials such as these, developed in collaboration with Alan Hatton, the Ralph Landau Professor of Chemical Engineering, could be used to coat medical devices or create protective clothing for soldiers.

Rutledge and Paula Hammond, the Bayer Professor of Chemical Engineering, recently reported in the journal Advanced Materials a material embedded with titanium oxide, which can break down a variety of industrial chemicals, including organic compounds like phenols and allyl alcohol.

The fibers hold promise for development of new breathable, waterproof materials. Four years ago, Rutledge and Randy Hill of Dow Corning created an electrospun sheet that is extremely water-repellent. Such a material, described in the journal Langmuir, has the potential to become a cheaper alternative to GoreTex, which is made of Teflon -- a more expensive starting material than the polymers used to make electrospun fibers. More recently, working with MIT professors Karen Gleason, Robert Cohen, Gareth McKinley and Michael Rubner, Rutledge's group has demonstrated a variety of ways to render breathable electrospun fabrics water- and oil-repellent.

Rutledge is now working on electrospun fibers made of block copolymers that self-assemble into a collection of concentric cylinders within the fiber. Such fibers, made possible by a co-axial version of electrospinning technology that the group reported in 2004, could be used to impart color to fabrics without dye, or to create "wearable power" by combining electrodes and electrolytes into individual fibers.

"There are a lot of ways one can imaginatively think to use some of this stuff," says Rutledge.

A version of this article appeared in MIT Tech Talk on May 6, 2009 (download PDF).