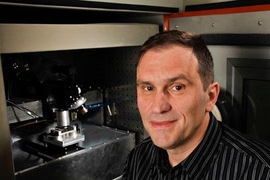 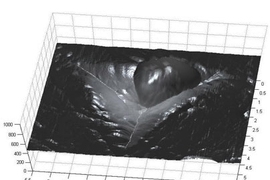 ↓ Download Image
Caption: The image shows the imprint left by a nanoindenter in a particle of cement paste. The round blob at the top center is actually an extremely fine piece of dust on the surface.
Credits: Photo / Chris Bobko

Caption:
The image shows the imprint left by a nanoindenter in a particle of cement paste. The round blob at the top center is actually an extremely fine piece of dust on the surface.
Credits:
Photo / Chris Bobko

MIT civil engineers have for the first time identified what causes the most frequently used building material on earth -- concrete -- to gradually deform, decreasing its durability and shortening the lifespan of infrastructures such as bridges and nuclear waste containment vessels.

In a paper published in the Proceedings of the National Academy of Sciences (PNAS) online Early Edition the week of June 15, researchers say that concrete creep (the technical term for the time-dependent deformation that occurs in concrete when it is subjected to load) is caused by the rearrangement of particles at the nano-scale.

"Finally, we can explain how creep occurs," said Professor Franz-Josef Ulm, co-author of the PNAS paper. "We can't prevent creep from happening, but if we slow the rate at which it occurs, this will increase concrete's durability and prolong the life of the structures. Our research lays the foundation for rethinking concrete engineering from a nanoscopic perspective."

This research comes at a time when the American Society of Civil Engineers has assigned an aggregate grade of D to U.S. infrastructure, much of which is made of concrete. It likely will lead to concrete infrastructure capable of lasting hundreds of years rather than tens, which will bring enormous cost-savings and decreased concrete-related CO2 emissions. An estimated 5 to 8 percent of all human-generated atmospheric CO2 worldwide comes from the concrete industry.

Ulm, who has spent nearly two decades studying the mechanical behavior of concrete and its primary component, cement paste, has in the past several years focused on its nano-structure. This led to his publication of a paper in 2007 that said the basic building block of cement paste at the nano-scale -- calcium-silicate-hydrates, or C-S-H -- is granular in nature. The paper explained that C-S-H naturally self-assembles at two structurally distinct but chemically similar phases when mixed with water, each with a fixed packing density close to one of the two maximum densities allowed by nature for spherical objects (64 percent for the lower density and 74 percent for high).

In the new research revealed in the PNAS paper, Ulm and co-author Matthieu Vandamme explain that concrete creep comes about when these nano-meter-sized C-S-H particles rearrange into altered densities: some looser and others more tightly packed.

They also explain that a third, more dense phase of C-S-H can be induced by carefully manipulating the cement mix with other minerals such as silica fumes, a waste material of the aluminum industry. These reacting fumes form additional smaller particles that fit into the spaces between the nano-granules of C-S-H, spaces that were formerly filled with water. This has the effect of increasing the density of C-S-H to up to 87 percent, which in turn greatly hinders the movement of the C-S-H granules over time.

"There is a search by industry to find an optimal method for creating such ultra-high-density materials based on packing considerations in confined spaces, a method that is also environmentally sustainable," said Ulm. "The addition of silica fumes is one known method in use for changing the density of concrete; we now know from the nanoscale packing why the addition of fumes reduces the creep of concrete. From a nanoscale perspective, other means now exist to achieve such highly packed, slow-creeping materials."

"The insight gained into the nanostructure puts concrete on equal footing with high-tech materials, whose microstructure can be nanoengineered to meet specific performance criteria: strength, durability and a reduced environmental footprint," said Vandamme, who earned a PhD from MIT's Department of Civil and Environmental Engineering in 2008 and is now on the faculty of the Ecole des Ponts ParisTech, UniversitÃ© Paris-Est.

In their PNAS paper, the researchers show experimentally that the rate of creep is logarithmic, which means slowing creep increases durability exponentially. They demonstrate mathematically that creep can be slowed by a rate of 2.6. That would have a truly remarkable effect on durability: a containment vessel for nuclear waste built to last 100 years with today's concrete could last up to 16,000 years if made with an ultra-high-density (UHD) concrete.

Ulm stressed that UHD concrete could alter structural designs, as well as have enormous environmental implications, because concrete is the most widely produced man-made material on earth: 20 billion tons per year worldwide with a 5 percent increase annually. More durable concrete means that less building material and less frequent renovations will be required.

"The thinner the structure, the more sensitive it is to creep, so up until now, we have been unable to build large-scale lightweight, durable concrete structures," said Ulm. "With this new understanding of concrete, we could produce filigree: light, elegant, strong structures that will require far less material."

Ulm and Vandamme achieved their research findings using a nano-indentation device, which allows them to poke and prod the C-S-H (or to use the terminology of civil engineering, apply load) and measure in minutes creep properties that are usually measured in year-long creep experiments at the macroscopic scale.

This work was funded in part by the Lafarge Group, a French building materials producer.