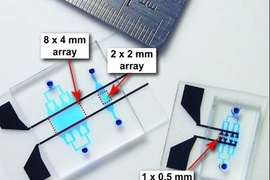 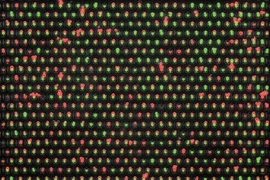 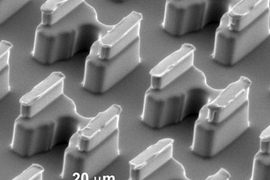 ↓ Download Image
Caption: These cups on a microchip trap cells so they can be paired up and fused together.
Credits: Image / Alison Skelley

Caption:
This microchip, developed at MIT, allows researchers to pair cells together in an orderly fashion. Each capture cup is sized to hold two cells.
Credits:
Image: Alison Skelley

The new technique should make it much easier for scientists to study what happens when two cells are combined. For example, fusing an adult cell and an embryonic stem cell allows researchers to study the genetic reprogramming that occurs in such hybrids.

MIT Tech TV
In this video, pairs of cells that have been trapped together are fused into single hybrid cells.

The researchers, led by a collaboration between Joel Voldman, associate professor of electrical engineering and computer science, and Rudolf Jaenisch, professor of biology and a member of the Whitehead Institute, report the new technique in the Jan. 4 online edition of Nature Methods.

The team's simple but ingenious sorting method increases the rate of successful cell fusion from around 10 percent to about 50 percent, and allows thousands of cell pairings at once.

Though cell fusion techniques have been around for a long time, there are many technical limitations, said Voldman.

Getting the right cells to pair up before fusing them is one major obstacle. If scientists are working with a mixture of two cell types, for example A and B, they end up with many AA and BB pairings, as well as the desired AB match.

Researchers had previously trapped cells in tiny cups as they flow across a chip. Each cup can hold only two cells, but there is no way to control whether the cups capture an A and a B, two As or two Bs.

In contrast, the cell-trapping cups on Voldman and Jaenisch's new sorting device are arranged strategically to capture and pair up cells of different types.

Once one A cell is in each large cup, type B cells are flowed into the large cups. Each cup can only hold two cells, so each ends up with one A and one B. After the cells are paired in the traps, they can be joined together by an electric pulse that fuses the cell membranes.

In addition to helping with studies of stem cell reprogramming, this technique could be used to study interactions between any types of cells. "It's a very general type of device," said Voldman.

The work was spearheaded by two postdoctoral associates, Alison Skelley, who worked in Voldman's lab, and Oktay Kirak, who works with Jaenisch. Skelley and Kirak are lead authors of the Nature Methods paper. Heikyung Suh, a technical associate in the Whitehead Institute, is also an author of the paper.

The research was funded by NASA and the National Institutes of Health.