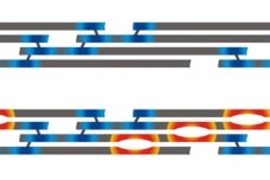 ↓ Download Image
Caption: The image at top depicts a healthy collagen fibril. The image below it depicts a fibril with brittle bone disease displaying the small rifts (in orange) that form in collagen tissue at the sites where an incorrect amino acid has been substituted for glycine. These tiny rifts lead to the brittle tissue, broken bones and deformity characteristic of the disease.
Credits: Graphic / Sebastien Uzel and Markus Buehler

Caption:
The image at top depicts a healthy collagen fibril. The image below it depicts a fibril with brittle bone disease displaying the small rifts (in orange) that form in collagen tissue at the sites where an incorrect amino acid has been substituted for glycine. These tiny rifts lead to the brittle tissue, broken bones and deformity characteristic of the disease.
Credits:
Graphic / Sebastien Uzel and Markus Buehler

The weak tendons and fragile bones characteristic of osteogenesis imperfecta, or brittle bone disease, stem from a genetic mutation that causes the incorrect substitution of a single amino acid in the chain of thousands of amino acids making up a collagen molecule, the basic building block of bone and tendon.

According to researchers at MIT, that minuscule encoding error creates a defective collagen molecule that, at the site of the amino acid substitution, repels rather than attracts the collagen molecule alongside it. This creates a tiny rift in the tissue, which when repeated in many molecules, leads to brittle tissue, broken bones, deformity and, in the most severe form of the disease, death. For example, if healthy collagen tissue looked like a sheet of paper, diseased collagen tissue would look more like a sheet of paper full of tiny perforations. At each of these perforations, the sheet would be considerably more prone to tearing.

In what may be the first detailed molecular-based multi-scale analysis of the role of a materials' failure in human disease, a paper in the Aug. 5 issue of Biophysical Journal describes exactly how the substituted amino acid repels other amino acids rather than forming chemical bonds with them, creating a radically altered structure at the nanoscale that results in severely compromised tissue at the macroscale. This approach to the study of disease, referred to as "materiomics" by the lead researcher on the project, Professor Markus Buehler of MIT's Department of Civil and Environmental Engineering, could prove valuable in the study of other diseases - particularly collagen- and other protein-based diseases - where a material's behavior and breakdown play a critical role.

"The consideration of how material properties change in diseases could lead to a new paradigm in the study of genetic disorders that expands beyond the biochemical approach," said Buehler.

Buehler first described the materiomics approach in an article appearing in the March 2009 issue of Nature Materials. He sees the application of this approach to collagen-based diseases as a starting point that could lead to a similar analysis of the mechanical properties of tissue involved in other protein-based diseases. About one in 10,000 people are diagnosed with brittle bone disease annually, and defective collagen is implicated in many other medical conditions, including Alport syndrome (kidney disease) and Ehlers-Danlos syndrome (overly-flexible skin and joints). The broader category of protein-based diseases contains even neuronal disorders such as Alzheimer's disease.

Three years ago, Buehler used atomistic-based multi-scale modeling to describe in detail the hierarchical structure of collagen, the tissue comprising most structural material in mammalian bodies. His model incorporates a bottom-up description of collagen, accounting for the hierarchical assembly of molecules, each of which consists of three helical threads of amino acids. The molecules are arranged in packets called fibrils that collectively make up whole tissue.

In new research, Buehler and Sebastien Uzel, a graduate student at MIT, and Alfonso Gautieri, Alberto Redaelli and Simone Vesentini of Politecnico di Milano modeled type I collagen's behavior at the atomistic level all the way up to the scale of the fibrils that make up whole tissue.

Using atomistic modeling, the researchers demonstrate exactly how the substitution of eight different amino acids in place of glycine changes the electrochemical behavior of the collagen molecules and affects the mechanical properties of the collagen tissue. They learned that the mutations creating the most severe form of the disease also correlate with the greatest magnitude of adverse effects in creating more pronounced rifts in the tissue, which lead to the deterioration and failure of the tissue.

"The study of how the nature of the genetic makeup influences the mechanical behavior of materials is an important frontier in bioengineering," said Uzel. "It could potentially revolutionize the way we understand, model and treat medical disorders, and may also lead to the development of new biomaterials for applications in tissue engineering and regenerative medicine."

This work was funded by a National Science Foundation CAREER Award, the Army Research Office, the Progetto Rocca Fund and the MIT-Italy Program.