In space, past is prologue 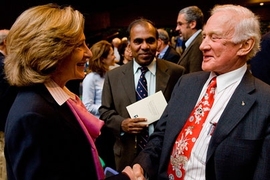 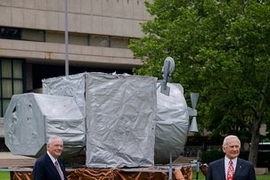 ↓ Download Image
Caption: Neil Armstrong (left) and Buzz Aldrin ScD '63 stand beside a replica of their lunar landing module that was recently built by MIT students as a "hack" that appeared on top of the great dome.
Credits: Photo / Justin Knight

Caption:
Neil Armstrong (left) and Buzz Aldrin ScD '63 stand beside a replica of their lunar landing module that was recently built by MIT students as a "hack" that appeared on top of the great dome.
Credits:
Photo: Justin Knight


It was an iconic moment: On Wednesday, Neil Armstrong and Buzz Aldrin ScD '63, the first two human beings ever to have left their footprints on another world, stood on the lawn in front of Kresge auditorium in a rare side-by-side appearance. They were posing in front of MIT's most recent student hack - a reproduction of the lunar module that had carried the two men to the surface of the moon 40 years ago next month.

It was fitting that their joint appearance should take place at MIT, whose expertise played a crucial part in making their epochal Apollo 11 journey possible. The two astronauts were among a veritable who's who of luminaries from the Apollo era, as well as from missions that are currently underway or planned for the future, who gathered on campus for a three-day conference called Giant Leaps that celebrated the legacy of Apollo and also examined what's in store for mankind's future in space.

The contrast between the Apollo era and today was illustrated by countless examples, including the way the contract was awarded for the guidance and navigation system that made possible the trip to the moon and a safe landing on its surface. Unlike today's lengthy competitive bidding processes and phone-book-sized government contracts, the deal was settled in one terse phone call between the head of the newly created NASA, James Webb, and the then-head of MIT's Department of Aeronautics and Astronautics and its Instrumentation Laboratory, Charles Stark ("Doc") Draper.

The conversation, as recalled by Aero-Astro Senior Lecturer Richard Battin, went like this. Webb: "Can you produce the guidance and control system for Apollo?" Draper: "Yes."

The resulting contract was one page long, and the specs for the system were sketched on one big blackboard during a marathon brainstorming session. (A copy of that blackboard is among a variety of Apollo artifacts, including one of the guidance computers used for training the astronauts, that are currently on display at the MIT Museum).

The Giant Leaps conference opened with a moving tribute to Robert C. Seamans Jr. a loved and respected leader of the Apollo project, as well as former MIT professor and dean of engineering, who died last summer. Seamans, as the associate administrator at NASA during the 1960s, was directly responsible for managing the Apollo program.

Seamans was very willing to listen to unpopular opinions, recalled Laurence Young '57, SM '59, ScD '62, the Apollo Program Professor of Astronautics (a professorship that was, with typical modesty, endowed by Seamans). One of those unpopular ideas was to design the Apollo missions using a lunar-orbit rendezvous - sending a craft into orbit around the moon, and then separating out a smaller craft to go down to the lunar surface and back - rather than sending a rocket straight to the moon's surface. The idea was strenuously opposed by leading figures including rocket pioneer Wernher von Braun, but Seamans nevertheless adopted that approach - which many people now believe was a key in making it possible to meet President Kennedy's challenge to send people to the moon and back before the 1960s were over.

"He was a leader of great ability at a critical time in the space race," said the usually reclusive Armstrong in his rare appearance at the Seamans celebration. "He was a consummate engineer," Armstrong said, who strongly believed in "stating the facts. He learned that this was not common in Washington."

Joking about Seamans' MIT roots, Armstrong quipped that when there was an early dispute between NASA centers on whether to use English or metric units, "Bob held out for Smoots."

MIT President Susan Hockfield, in introducing a daylong Giant Leaps symposium on Thursday, pointed to Apollo as a classic example of "exactly what we do here." She said that "the intellectual rocket of discovery is powered by the capacity of human minds to define a problem, devise a solution, and redefine the meaning of impossible." Part of the courage needed by today's students to take on the many difficult challenges facing the world today, she said, stems from the way the Apollo program "made us believe the sky is no longer the limit."

Now that the achievement of that goal is part of our history, it is easy to forget how great the challenge was. Theodore Sorenson, who was President Kennedy's chief speechwriter, recalled that when Kennedy initially presented his plan for sending people to the moon in an address to the U.S. Congress, the legislators "reacted with stunned disbelief. The president sensed that the audience wasn't with him," and launched into an improvised exhortation that was "the only time that I know of that he deviated from the text."

Looking to the future of the space program, Aldrin told journalists at the symposium that "we need to develop commercial ways, not just government ways, of using space." While the current NASA plans for returning to the moon call for a spacecraft that resembles the Apollo program's Saturn V more than its successor, the space shuttle, Aldrin asked, "why are we not continuing to develop a spacecraft that can land on runways?"

While that's not a project currently on MIT's agenda, many other innovations in planning for future exploration in space are actively being developed by MIT students, faculty and research staff. Among the forward-looking projects currently underway is work on an entry in the Google Lunar X-Prize, a $30 million competition to develop the first privately funded craft to land on the moon and travel across its surface.

The MIT vehicle takes an innovative approach, with a design that uses the same rocket motors to control its descent to the surface and then to take off again, move across the surface, and make another touchdown at a second location. At the symposium, MIT Professor of the Practice of Astronautics Jeffrey Hoffman, a former astronaut who leads the MIT participation in this project, demonstrated a mockup of the lander designed to test its hovering and maneuvering capabilities. Such a craft, he pointed out, could reach areas such as deep craters or canyons that a conventional surface rover could never enter.

Another return to the moon, in which MIT is taking the lead role, is a pair of lunar-orbiting satellites called GRAIL, led by Maria Zuber, the head of the Department of Earth, Atmospheric and Planetary Sciences. The twin craft will map the interior of the moon by tracing variations in its gravitational pull. Zuber said that this is just one of a whole generation of new spacecraft that will be continuing the exploration of the solar system in coming years, in many cases providing more detailed information about other celestial bodies than we have about the Earth itself.

"It is so much easier to make the case for sending an instrument to another planet" than for a similar instrument to study Earth, she said. "There is something fundamentally wrong with that."

Erika Wagner, who runs the X-Prize@MIT program, appeared at the symposium as a member of the generation born after the Apollo program ended. She commented that the present U.S. space program no longer excites people. "How do we recreate the spirit of Apollo?" she asked. "We need to amaze people again." Rather than repeating programs that have been done before, it's important to take on difficult new challenges, she said. "We need to talk about what's hard. That's how to inspire the next generation... When we do incredible things again, we will excite them."

Students at MIT are actively pursuing a variety of cutting-edge projects for the space program. Among them is the design of the next generation of spacesuits, which could be a key part in ensuring that future missions of exploration are more productive and less exhausting that those using present equipment. The new designs, explained Aero-Astro postdoctoral researcher James Waldie, are based on tight-fitting material that compresses the body differently in different areas in order to match the pressure that Earth's gravity would normally provide.

The need for such innovation was stressed by Harrison "Jack" Schmitt, who on the Apollo 17 mission became the first and only geologist to visit the moon. He said at the symposium that working on the moon with the Apollo space suits, and especially their stiff gloves, "was very tiring." He added that "hopefully, young MIT students will come up with better space suits than we had."

But whatever the future may hold, the legacy of the Apollo program is likely to be a lasting one - and, on the surface of the airless moon, a very long-lasting one indeed. Schmitt pointed out that it's been estimated that the footprints he and his fellow astronauts left in the lunar dust will remain visible for a least a million years.

"That's not bad," he said, "to leave your footprints in the sands of time for a million years."