To the moon, by way of MIT 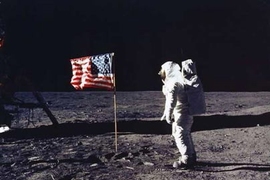 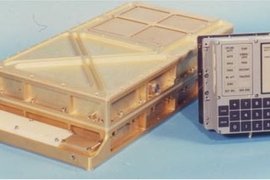 Many people consider the Apollo lunar landings one of the crowning achievements of human ingenuity. But not so many people realize that the epochal first steps by human beings on another world -- which took place 40 years ago next month -- likely would not have been possible without the technological experience and capabilities of MIT.

In celebration of that singular accomplishment and MIT's crucial role in it, the Institute is holding a three-day symposium and celebration on June 10-12 that will feature talks by astronauts, engineers, and others involved in that mission, as well as an examination of what lies ahead for the U.S. space program in the coming decades. The event's title, "Giant Leaps," evokes the famous first words spoken by astronaut Neil Armstrong after descending a ladder to the lunar surface on July 20, 1969: "That's one small step for a man, one giant leap for mankind."

The second person to walk on the moon just moments after Armstrong's "one small step" was Buzz Aldrin ScD '63. In the course of his studies at MIT, Aldrin took the class in astrodynamics (16.346) that was then, and still is today, taught by Senior Lecturer Richard Battin of the Department of Aeronautics and Astronautics. Of the 12 men who have walked on the moon, two others -- David Scott SM '62, EAA '62 of Apollo 15, and Edgar Mitchell ScD '64 of Apollo 14 -- also took Battin's class. And Charles Duke of Apollo 16 received his SM in 1964 under the guidance of Laurence Young, the Apollo Program Professor of Aeronautics and Astronautics and a professor of health sciences and technology.

But MIT's role in the Apollo program was much more crucial than just educating its astronauts. One of the most complex tasks required to make the lunar landing possible was the unprecedented feat of navigation required to guide a craft through a round-trip of more than a half-million miles, and to achieve a controlled, precise landing on the lunar surface on the very first try -- there was no fuel available for a wave-off and another attempt. If the landing didn't work as it was supposed to, there would be no second chances, and no return.

A feat of engineering

That navigational feat was accomplished by the team in Aero-Astro's MIT Instrumentation Lab, which has since become the Draper Laboratory. The lab was headed by Charles Stark Draper, and Battin and David Hoag led the hardware and software design and development for the Apollo Guidance and Navigation System. They developed both the hardware -- small, special-purpose computers -- and the software that enabled the onboard computer to control the actual descent and landing on the moon's craggy surface. William Widnall, the husband of Institute Professor Sheila Widnall, was also among the leaders in the lab at that time and was responsible for the digital flight control systems of both the Apollo Command Module and the Lunar Module.

The engineering accomplishment was all the more remarkable when you realize that the computer, designed by MIT and built by Raytheon, had less memory (74 kilobytes of ROM, and 4 kb of RAM) than today's low-end cell phones, and that its software was literally hard-wired, so that any changes required starting over with the manufacture of a whole new "rope memory." Built at a time when most computers filled large air-conditioned rooms, the one-cubic-foot Apollo Guidance Computer was a unique device that foreshadowed the advent of personal computers.

The story of that work on the guidance system is told in detail in a book published last year by MIT Press, "Digital Apollo," by David Mindell, the Frances and David Dibner Professor of the History of Engineering and Manufacturing and director of the Program in Science, Technology, and Society. The book explores the interplay between automation and human control in the complex process of landing a craft on the moon, overcoming the dangers of boulders, craters, steep slopes and electronic malfunctions to accomplish Apollo's six successful landings.

But as critical as its role was in the great accomplishments of the Apollo program, MIT's involvement in the space program has extended far beyond that, and is likely to continue far into the future. As part of the June "Giant Leaps" symposium, speakers will be looking ahead at the future in space as much as recalling its past.

Young '57, SM '59, ScD '62, who was the founding director of the National Space Biomedical Research Institute, which does research on the biological and psychological effects of space flight, consulted with NASA's Marshall Center on the Apollo project. He later became a qualified Payload Specialist for the U.S. space shuttle's Spacelab biological laboratory, though he never flew a space mission. Young is now actively working on research on issues of space motion sickness and eye-hand coordination in zero-gravity and spatial disorientation facing astronauts when they return to the moon.

Young says that the present NASA plan for returning to the moon by the end of the next decade, which is now being reassessed by the new administration, has the potential to provide important information about the biological effects of reduced gravity.

Even though we've been there before, Young says, "the challenges of going back to the moon are non-trivial." Among the areas that still require extensive research, he says, are the ways that human perception, such as depth perception and sense of balance, are affected by such things as reduced gravity and the absence of an atmosphere, which can make distant objects appear much closer than they really are.

Such differences could become critical when people begin exploring the lunar surface, because they can affect "how they know they're going where they should be going," Young says. And such research will be important in learning enough to make possible later missions to Mars, where the distance from home is orders of magnitude greater and thus opportunities to get guidance from Earth far more limited.

Mars exploration is "filled with danger," Young says. "It would be terrible to try it and lose people right off the bat," he says, and therefore experience gained both on the moon and in the International Space Station could prove crucial.

One step in better understanding the possible effects of being on Mars could come from a research project headed by Erika Wagner SM '02, PhD '07, an instructor in the Deshpande Center for Technological Innovation. Wagner is the director of a project called the Mars Gravity Biosatellite, which aims to put a small satellite in Earth orbit that would simulate the one-third gravity of Mars, subjecting small test animals to that environment for long periods to learn about the physical effects.

Another forward-looking project is one led by former astronaut Hoffman, who is working with a team including MIT students that plans to compete in the Google Lunar X-Prize Competition. That competition is offering a $30 million prize to the first group to send a spacecraft to the moon, land safely and then move at least 500 meters across the surface. The MIT team's approach involves using a unique "hopper" design. The craft would land, like the Apollo module, using a retro-rocket to control its descent. But then it would re-light the rocket, rise a short distance and move across the surface before making a second landing.

In a sense, the mission would bring MIT full circle. After having provided the large team of experts that produced the guidance and control systems that made possible the culmination of a major national effort to reach the moon, a few decades later a similar feat of engineering is now at a point where it is at least possible that it could be achieved largely through the efforts of a small group of students, using off-the-shelf computer chips. A giant leap, indeed.

The Giant Leaps program begins on June 10 with a tribute to Robert C. Seamans Jr., former Aero-Astro professor and MIT dean of engineering, who was second in command at NASA headquarters during the Apollo years. Seamans, who died last June, will be celebrated with a program beginning at 2:30 p.m. at Kresge Auditorium.

On June 11, a daylong symposium in Kresge will feature talks and panel discussions, including a panel on Apollo moderated by Hoffman and including Battin, flight director Chris Kraft, Apollo astronaut and geologist Harrison "Jack" Schmitt, and speechwriter to President Kennedy Ted Sorenson. Afternoon sessions will include a look at energy policy featuring presidential science advisor John Holdren '65, SM '66, and a look at future space exploration chaired by EAPS department head Maria Zuber. That evening, a special Boston Pops concert will be narrated by Apollo 11 astronaut Buzz Aldrin. On Friday, there will be a tour of Apollo artifacts at the MIT Museum, as well as tours of Aero-Astro labs.