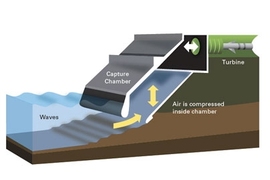 ↓ Download Image
Caption: Schematic of an oscillating water column. Waves enter through a subsurface opening into the chamber with air trapped above. The wave action causes the captured water column to move up and down, pushing the trapped air into an electricity-generating turbine. The turbine turns continuously, despite the changing direction of the air stream as the waves come in and out.
Credits: Graphic courtesy / MIT Energy Initiative

Caption:
Schematic of an oscillating water column. Waves enter through a subsurface opening into the chamber with air trapped above. The wave action causes the captured water column to move up and down, pushing the trapped air into an electricity-generating turbine. The turbine turns continuously, despite the changing direction of the air stream as the waves come in and out.
Credits:
Graphic courtesy / MIT Energy Initiative

MIT researchers are working with Portuguese colleagues to design a pilot-scale device that will capture significantly more of the energy in ocean waves than existing systems, and use it to power an electricity-generating turbine.

Wave energy is a large, widespread renewable resource that is environmentally benign and readily scalable. In some locations -- the northwestern coasts of the United States, the western coast of Scotland, and the southern tips of South America, Africa and Australia, for example -- a wave-absorbing device could theoretically generate 100 to 200 megawatts of electricity per kilometer of coastline. But designing a wave-capture system that can deal with the harsh, corrosive seawater environment, handle hourly, daily and seasonal variations in wave intensity, and continue to operate safely in stormy weather is difficult.

Chiang Mei, the Ford Professor of Engineering in the Department of Civil and Environmental Engineering, has been a believer in wave energy since the late 1970s. After the recent oil-price spike, there has been renewed interest in harnessing the energy in ocean waves.

To help engineers design such devices, Professor Mei and his colleagues developed numerical simulations that can predict wave forces on a given device and the motion of the device that will result. The simulations guide design decisions that will maximize energy capture and provide data to experts looking for efficient ways to convert the captured mechanical energy to electrical energy.

One country with a good deal of expertise in wave energy research and development is Portugal. For the past three years, Mei has been working with Professors Antonio Falcao, Antonio Sarmento, and Luis Gato of Insitituto Superior Tecnico, Technical University of Lisbon, as they plan a pilot-scale version of a facility called an oscillating water column, or OWC. Situated on or near the shore, an OWC consists of a chamber with a subsurface opening. As waves come in and out, the water level inside the chamber goes up and down. The moving surface of the water forces air trapped above it to flow into and out of an opening that leads to an electricity-generating turbine. The turbine is a design by A.A.Wells in which the blades always rotate in the same direction, despite the changing direction of the air stream as the waves come in and out.

The Portuguese plan is to integrate the OWC plant into the head of a new breakwater at the mouth of the Douro River in Porto, a large city in northern Portugal. Ultimately, the installation will include three OWCs that together will generate 750 kilowatts -- roughly enough to power 750 homes. As a bonus, the plant's absorption of wave energy at the breakwater head will calm the waters in the area and reduce local erosion.

The challenge is to design a device that resonates and thus operates efficiently at a broad spectrum of wave frequencies -- and an unexpected finding from the MIT analysis provides a means of achieving that effect. The key is the compressibility of the air inside the OWC chamber. That compressibility cannot be changed, but its impact on the elevation of the water can be -- simply by changing the size of the OWC chamber. The simulations showed that using a large chamber causes resonance to occur at a wider range of wavelengths, so more of the energy in a given wave can be captured. "We found that we could optimize the efficiency of the OWC by making use of the compressibility of air -- something that is not intuitively obvious," Mei says. "It's very exciting."

He is currently working with other graduate students on wave power absorbers on coastlines of different geometries and on how to extract wave power from an array of many absorbers.

Mei continues to be enthusiastic about wave energy, but he is not unrealistic in his expectations. Although costs have been falling in recent years, wave energy is unlikely to be commercially viable for a long time -- perhaps several decades. Nevertheless, Mei is adamant that more attention should be given to this renewable source of energy, and he would like to see a team of MIT experts in different fields -- from energy capture and conversion to transmission and distribution -- working collaboratively toward making large-scale wave energy a reality.

"Given the future of conventional energy sources, we need lots of research on all kinds of alternative energy," he says. "Right now, wind energy and solar energy are in the spotlight because they've been developed for a longer time. With wave energy, the potential is large, but the engineering science is relatively young. We need to do more research."

Research on the OWC was supported by the MIT-Portugal Program.

(This article is adapted from a longer version that appeared in the autumn 2008 issue of Energy Futures, the newsletter of the MIT Energy Initiative, which is available on the MITEI website at http://web.mit.edu/mitei