Spinal cord stem cells could be basis of new treatment 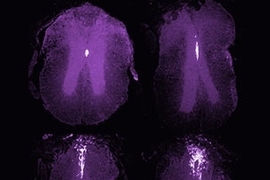 ↓ Download Image
Caption: Coronal sections of injured adult spinal cord, anterior to posterior. The labelling shows recombined ependymal cells and their progeny (white) migrating out to the injury area in the dorsal funiculus, as a reponse to the injury (injury is in the image on the right hand corner). The mouse is a FoxJ1-CreER x R26R-LacZ reporter.
Credits: Image / Konstantinos Meletis 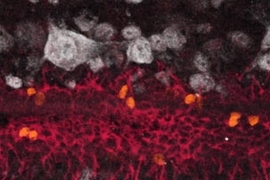 Caption:
Coronal sections of injured adult spinal cord, anterior to posterior. The labelling shows recombined ependymal cells and their progeny (white) migrating out to the injury area in the dorsal funiculus, as a reponse to the injury (injury is in the image on the right hand corner). The mouse is a FoxJ1-CreER x R26R-LacZ reporter.
Credits:
Image / Konstantinos Meletis

A researcher at MIT's Picower Institute for Learning and Memory has pinpointed stem cells within the spinal cord that, if persuaded to differentiate into more healing cells and fewer scarring cells following an injury, may lead to a new, non-surgical treatment for debilitating spinal-cord injuries.

The work, reported in the July issue of the journal PLoS (Public Library of Science) Biology, is by Konstantinos Meletis, a postdoctoral fellow at the Picower Institute, and colleagues at the Karolinska Institute in Sweden. Their results could lead to drugs that might restore some degree of mobility to the 30,000 people worldwide afflicted each year with spinal-cord injuries.

In a developing embryo, stem cells differentiate into all the specialized tissues of the body. In adults, stem cells act as a repair system, replenishing specialized cells, but also maintaining the normal turnover of regenerative organs such as blood, skin or intestinal tissues.

The tiny number of stem cells in the adult spinal cord proliferate slowly or rarely, and fail to promote regeneration on their own. But recent experiments show that these same cells, grown in the lab and returned to the injury site, can restore some function in paralyzed rodents and primates.

The researchers at MIT and the Karolinska Institute found that neural stem cells in the adult spinal cord are limited to a layer of cube- or column-shaped, cilia-covered cells called ependymal cells. These cells make up the thin membrane lining the inner-brain ventricles and the connecting central column of the spinal cord.

"We have been able to genetically mark this neural stem cell population and then follow their behavior," Meletis said. "We find that these cells proliferate upon spinal cord injury, migrate toward the injury site and differentiate over several months."

The study uncovers the molecular mechanism underlying the tantalizing results of the rodent and primate and goes one step further: By identifying for the first time where this subpopulation of cells is found, they pave a path toward manipulating them with drugs to boost their inborn ability to repair damaged nerve cells.

"The ependymal cells' ability to turn into several different cell types upon injury makes them very interesting from an intervention aspect: Imagine if we could regulate the behavior of this stem cell population to repair damaged nerve cells," Meletis said.

Upon injury, ependymal cells proliferate and migrate to the injured area, producing a mass of scar-forming cells, plus fewer cells called oligodendrocytes. The oligodendrocytes restore the myelin, or coating, on nerve cells' long, slender, electrical impulse-carrying projections called axons. Myelin is like the layer of plastic insulation on an electrical wire; without it, nerve cells don't function properly.

"The limited functional recovery typically associated with central nervous system injuries is in part due to the failure of severed axons to regrow and reconnect with their target cells in the peripheral nervous system that extends to our arms, hands, legs and feet," Meletis said. "The function of axons that remain intact after injury in humans is often compromised without insulating sheaths of myelin."

If scientists could genetically manipulate ependymal cells to produce more myelin and less scar tissue after a spinal cord injury, they could potentially avoid or reverse many of the debilitating effects of this type of injury, the researchers said.

This study was supported by grants from the Swedish Research Council, the Swedish Cancer Society, the Foundation for Strategic Research, the Karolinska Institute, EuroStemCell and the Christopher and Dana Reeve Foundation.