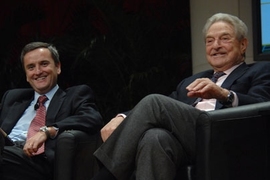 Caption:
International financier and philanthropist George Soros, right, had a conversation with Ford International Professor of Economics and head of the department of economics Ricardo J. Cabellero at Kresge on Tuesday, October 28.
Credits:
Photo / Donna Coveney

Financier, philanthropist and political activist George Soros told an MIT audience Tuesday that the current financial crisis underscored the need for regulation, even while he warned of the pitfalls of regulation and insisted on the impossibility of predicting the economic future.

"The prevailing perception of the market actually affects the so-called fundamentals that market prices are supposed to impact," Soros said during a wide-ranging conversation moderated by Ricardo Caballero, the Ford International Professor of Economics and head of the Department of Economics. "That is the nature of financial systems. Bubbles are a particular manifestation of this."

Because financial markets are not a "natural" but a "human" phenomenon, "the idea that you should be able to predict the future is nonsense," he told a packed audience in Kresge Auditorium.

"I don't get the market right," admitted Soros, later adding, "The reason I do well is I learn from my mistakes."

Soros said the recent meltdown of global financial markets -- something the former hedge fund manager described in dire terms -- undercut the pervasive belief that markets could be entirely self-regulating. That misconception arose, ironically, from the resolution of past financial crises with regulatory interventions: "These periodic financial crises served as successful tests of the misconception of market fundamentals," he said.

The burst of the housing bubble in the United States was, Soros said, a relatively small event but it was a "detonator that set off a much bigger explosion. And that super bubble has been growing for at least 25 years."

Soros, whose new book is titled "The New Paradigm for Financial Markets," criticized former Federal Reserve Chairman Alan Greenspan for keeping interest rates "too low for too long" and, more fundamentally, for holding fast to the idea that it was better to "pick up the pieces" rather than impose regulations on the market.

Caballero also asked the question that was on the mind of many in the audience: "How do we fix the system?"

Certainly, financial markets will always undergo bubbles and bursts, but "unless the United States leads an international effort to stabilize the system, the system will not continue," Soros asserted.

However, while, "I argue that the ideology that markets are perfect is wrong, regulations are also imperfect, in fact they are more imperfect than the market â€¦ you don't want to regulate more than you have to. But I think you have to regulate credit as well as money."

During an audience question and answer session, Soros was questioned about his financial past as well as his analysis. MIT Sloan School of Management student Gary Cao asked Soros about his role during "Black Wednesday" in 1992, when the financier made $1 billion as the British pound collapsed.

"I played by the rules. I was a key member of the market. I was doing what other people in the market were doing, with no negative moral implications," Soros replied. "At the time, as a citizen, I was concerned about making the rules better. And I'm still concerned."

Another questioner noted that Soros had written previous books predicting economic doom. Yes, Soros said amid laughter, he made such predictions in 1987 and 1997 and "the third time the wolf came."

In response to a question about the impact of the financial crises on nascent democracies in volatile areas of the world, Soros sounded a hopeful note, saying that the United States could play a positive role but "for that we have to change fundamentally what we stand for and recognize that â€¦ we have an obligation to the world which we have absolutely abandoned."

Yet Soros also said that the United States would cease to be the world's undisputed dominant force. "The veto power that we have in the International Monetary Fund will disappear. We will be downsized. At the same time, hopefully, we will have a better working system and opponents will be more downsized than we will."