Boston students get set for their next four years at MIT 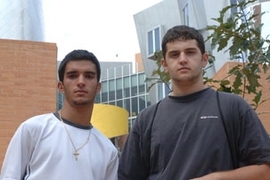 When Alban Cobi, 18, and Bruno Piazzarolo, 17, started their senior year at the John D. O'Bryant School of Math & Science in the Roxbury section of Boston, they really wanted to go to MIT --Â but neither was counting on it.

The two students understood just how tough it was to get accepted at MIT and that no student from their school had been admitted in recent memory. So they decided to apply and not be too disappointed if they didn't get in.

Thus, when Cobi and then Piazzarolo got the news in the spring that both were accepted to the Class of 2012, it was -- in the parlance of high school -- an "Omigod" exalted moment.

"I love the school so much I knew I had to come here," said Cobi, during his first week on campus. "Part of it is MIT's great name. And now, as I come to orientation, I like the people here. It's very diverse. We have people from all these countries and states -- I think anyone can fit in here."

For the past several years, MIT has had a close relationship with the O'Bryant School, coordinated by Professor J. Kim Vandiver, dean for undergraduate research. It is one of many efforts MIT is making to help prepare high school students for rigorous education in math and science.

For Piazzarolo and Cobi, the preparation paid off.

Piazzarolo got the news of his acceptance via cell phone while in a Best Buy. "I was really excited -- it was somewhat of a shock," he said.

The two teenagers were instant celebrities at O'Bryant, the former Boston Technical High School, and one of the examination schools in the greater Boston Area. "It's really good for our school," Piazzarolo said.

Michael Sullivan, O'Bryant director of science and technology, said that while it was doubtful that the pair are the very first in the school's 100-year history to go to MIT, they were certainly the first to do so in many years. "We're trying to establish a much stronger relationship with MIT," he said.

Cobi credits his favorite teacher, physics instructor Steve Fernandez '88, for encouraging him to apply. And when his Spanish teacher found out he had been accepted, she had tears of joy in her eyes.

Fernandez told him, "You're going have a very fun four years but a lot of hard work," Cobi said.

Both Cobi and Piazzarolo are the children of immigrants who came to the United States in pursuit of "the American dream," as Cobi put it. Cobi was born in Albania, and his parents moved to Boston about 10 years ago. "My parents knew that America was a better country for education," he said.

Piazzarolo's parents hail from Brazil, and Piazzarolo, who was born in Boston, spent some years there before settling with his parents in Brighton.

His interest in attending MIT stemmed from his participation in the FIRST robotics competition, where he was encouraged by Edward Moriarty, technical instructor in the MIT Edgerton Center. At O'Bryant, both he and Cobi took Advanced Placement physics, calculus and chemistry and Cobi even took AP history, even though he admits he hated history (but now has respect for the subject).

Piazzarolo plans to concentrate on mechanical engineering ("Ultimately, I want to do something with cars; I'm not sure what yet," he said), while Cobi has become intrigued with ocean engineering. Cobi also hopes to get on the ping-pong and sailing team while Piazzarolo is aiming for soccer.

Piazzarolo's pre-enrollment jitters have been calmed somewhat by learning about all the support systems available for students. He is reassured that MIT seems ready to help out as long as he's prepared to dig in. And he's happy that classmate Cobi will also be there. "We won't feel alone -- we can help each other out," Cobi said.