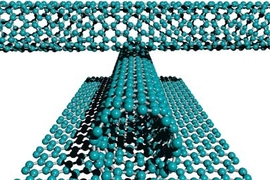 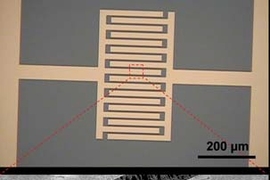 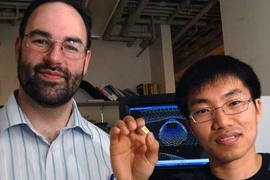 Using carbon nanotubes, MIT chemical engineers have built the most sensitive electronic detector yet for sensing deadly gases such as the nerve agent sarin.

The technology, which could also detect mustard gas, ammonia and VX nerve agents, has potential to be used as a low-cost, low-energy device that could be carried in a pocket or deployed inside a building to monitor hazardous chemicals.

"We think this could be applied to a variety of environmental and security applications," said Michael Strano, the Charles and Hilda Roddey Associate Professor of Chemical Engineering and senior author of a paper describing the work published this week in the online edition of Angewandte Chemie.

Strano's sensor has exhibited record sensitivity to molecules mimicking organophosphate nerve toxins such as sarin: It can detect minute quantities as low as 1 femtomole (1 billion molecules), roughly equivalent to a concentration of 25 parts per trillion. "There's nothing that even comes close," he said.

Sarin, which killed 12 people in a 1995 terrorist attack on the Tokyo subway, can kill at very low concentrations (parts per million) after 10 minutes, so highly sensitive detection is imperative to save lives. The new detector is far more sensitive than needed to detect lethal doses.

To build their super-sensitive detector, Strano and his team used an array of carbon nanotubes aligned across microelectrodes. Each tube consists of a single-layer lattice of carbon atoms, rolled into a long cylinder with a diameter about 1/50,000 of the width of a human hair, which acts as a molecular wire.

The nanotube sensors require very little power--about 0.0003 watts. One sensor could run essentially forever on a regular battery. "It's something that could sit in the corner of a room and you could just forget about it," Strano said.

The researchers achieved new levels of sensitivity by coupling the nanotubes with a miniature gas-chromatography column etched onto a silicon chip smaller than a penny. The column rapidly separates different gases before feeding them into the nanotubes.

The new MIT sensor is also the first nanotube sensor that is passively reversible at this level of sensitivity. To achieve this, the team needed to decrease how strongly the nanotube sensor binds different gas molecules on its surface, allowing the sensor to detect a series of gas exposures in rapid succession.

Using a newly described chemistry outlined in a separate paper published in January in the Journal of the American Chemical Society, Strano and co-workers showed that this can be done by coating the nanotubes with amine-type molecules, which donate an extra pair of electrons to the nanotubes.

The coating allows gas molecules to bind to nanotubes but detach a few milliseconds later, allowing another molecule from the column to move in. With a network of these reversible sensors, a gas could be tracked as it spreads through a large area.