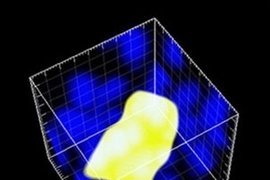 MIT biological engineers have developed a new imaging system that allows them to see cells that have undergone a specific mutation.

The work, which could help scientists understand how precancerous mutations arise, marks the first time researchers have been able to pinpoint the number and location of mutant cells--cells with a particular mutation--in intact tissue. In this case, the researchers worked with mouse pancreatic cells.

"Understanding where mutations come from is fundamental to understanding the origins of cancer," said Bevin Engelward, associate professor of biological engineering and member of MIT's Center for Environmental Health Sciences, and an author of a paper on the work appearing in this week's online edition of the Proceedings of the National Academy of Science.

Peter So, professor of biological and mechanical engineering, Engelward and members of their laboratories developed technologies that made it possible to detect clusters of cells that appeared to be descended from the same progenitor cell.

Unexpectedly, more than 90 percent of the cells harboring mutations were within clusters. That offers evidence that the majority of mutations are inherited from another cell, rather than arising spontaneously in individual cells.

Since the type of mutation being studied (in this case a recombination event) occurs at a rate on par with other types of mutations, "it is as if we are peering in at the very general process of mutation formation, persistence and clonal expansion," said Engelward.

"We think this raises the possibility that mutations resulting from cell division are a tremendous factor in increasing the mutagenic load," she said.

The higher the mutagenic load, the more likely it is that cancer will develop.

Engelward and So started working together several years ago after a faculty retreat for MIT's newly formed Biological Engineering Division. So was developing a new type of microscopy, known as two-photon imaging, and the researchers wondered whether it could be used to locate and image rare types of cells.

The team genetically engineered a strain of mice in which DNA would fluoresce if a mutation occurred in a particular sequence. That allowed them to use So's newly developed high-resolution, high-throughput microscopy technique to detect individual cells that carry the mutation.

"The problem drove the development of a new imaging technology, which now can be used for lots of things," said Engelward.

The work was truly a team effort between many people with very different areas of expertise, said Engelward. "The Department of Biological Engineering and the Center for Environmental Health Sciences are key in helping to bridge people across disciplines," she said.

The research was funded by the National Institutes of Health, the Department of Energy and the Singapore-MIT Alliance.